Owners Of Maradu Flats Demolished For CRZ Violations Not Entitled To Interest On Refund From Builders: Supreme Court 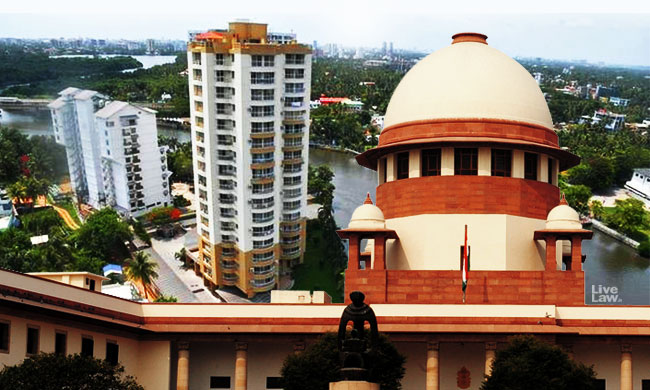 The Supreme Court on Friday held that the owners of the flats in the four buildings in Maradu, Kochi, which were demolished in 2020 for CRZ violations, are not entitled to interest on the refund payable to them by the builders.

A bench comprising Justices L Nageswara Rao and BR Gavai ruled so on the reasoning that the purchasers had been staying in the flats allotted to them for a period of 8-9 years on an average and that they still have undivided share in the land, the market value of which has increased substantially. The bench also observed that the flats that were taken possession of in the years between 2009-2013 would have depreciated in value.

"Therefore, in view of the position as stated above, we are of the considered view that the flat-owners are not entitled for any interest on the amounts paid by them to the builders", the bench held.

The bench noted that the amount of Rs.25 lakhs has been paid as interim compensation by the State Government in 2019 itself. The judicial committee constituted by the Court in 2019, headed by former Kerala High Court judge Justice Balakrishnan Nair, is overseeing the process of payment of amounts to the flat-owners. The flat-owners of three out of four building complexes have received the amount paid by them for the flat, as determined by the Committee. No monies have been paid by one among the builders - Holy Faith - to the flat-owners, as determined by the Committee.

The flat owners prayed for interest on the refund by submitting that they had invested their life-savings in the apartments, whihc were ultimately demolished on orders of the Supreme Court for violations of the Coastal Regulation Zone norms.

The builders opposed the plea for interest by saying that all owners are not similarly situated. They also contended that some purchasers bought the flats despite having knowledge about the legal proceedings.

Justice Balakrishnan Nair submitted a report opining against the grant of interest. He stated that it would be difficult to determine the market value of the flats since the furnishing and interior of each flat is different. The Committee further observed that the particulars of the payment made in instalments by the flat-owner was not available and, therefore, it is difficult to determine the calculation of interest in respect of at least 1/3rd of the flat-owners. In so far as the remaining flat-owners are concerned, the Committee held that it is not easy to calculate the interest that has to be paid. The committee pointed out the procedural difficulties and also mentioned that if it was to do this exercise, all the cases will have to be re- opened with notices to the Builders and the flat-owners of each flat and the entire exercise would take at least 6 months to materialize, not to mention the further unforeseen complications that might arise due to lack of material data on record.

Advocate Gaurav Agarwal, appointed as amicus curiae in the case, also took a stand that flat owners are not entitled to interest.

Rejecting the plea of the flat owners, the bench observed :

"It is no doubt true that the flat-owners were paid only the amount that was invested by them at the time of purchase of flats. However, it is relevant to take into account the fact that the flat- owners had the benefit of staying in the flats for a period of 8-9 years on an average and also that the land belongs to the flat-owners as joint owners the market value of which has increased substantially. It is also to be noted that flats that were taken possession of in the years between 2009-2013 would have depreciated in value".

Last week, the bench had appointed Justice Thottathil Radhakrishnan, former Chief Justice of the Calcutta High Court and judge of the Kerala High Court, to enquire about the involvement of Builder/Promoter/persons/officials responsible for the illegal construction of the buildings.

Four high rise apartment buildings in Maradu - Golden Kayaloram, Jain Coral Cove, H2O Holy Faith and Alfa Serene - were demolished in January 2020 following the directions issued by the Supreme Court after finding that they were built in violation of the relevant Coastal Regulation Zone norms.