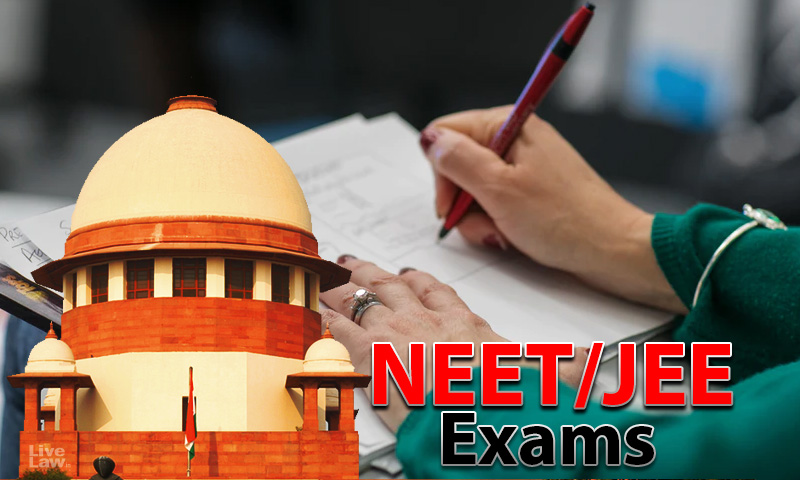 A plea has been filed before the Supreme Court seeking for suo moto cognizance to be taken of news reports of students being unable to take examinations such as NEET, JEE etc. due to "unforeseen, unavoidable circumstances amid COVID-19 situations" and to direct the National Testing Agency to arrange for the re-examination of such students on a later date.


The plea, filed on behalf of Advocate Shashwat Anand through Advocates Rajesh Inamdar, Amit Pai and Smita Pandey, also seeks for issuing/laying down certain guidelines and/or directions for the students who miss out on such competitive exams as a result of any sufficient cause, to allow and facilitate the same to appear in such exams on such further dates as may be notified by the Respondents.

The plea refers to a Hindustan Times article published on 13th September wherein an ordeal of a student in Bihar has been reported. The student allegedly had to travel 700 kilometres to take the exams, but was not permitted to take the exam as he was apparently late by 10 minutes.

It is submitted that the Supreme Court had considered the issue pertaining to the conduct of the NEET exam and had dismissed the same, thereby allowing for the exams to take place and observed that postponement of NEET/JEE would put the "career of students in peril".

"It is submitted that several lakhs of students risking their lives and danger of diseas and death took the examinations and considering their academic future and after scrutiny the students ought to have been permitted to appear in the examination", states the plea.

In light of the above, the Petitioner avers that the students "deserve one more chance/opportunity, as to those who found it difficult to take NEET exam on account of pandemic restrictions, or other unforeseeable or unavoidable circumstances".

"It is submitted that if this Hon'ble Court does not take note of this act and not provide opportunity to all such students considering the inevitable and prevailing condition, the career of all such students will be put on peril for long and full academic year will be wasted who despite all odds and difficulties could not reach the examination centres or could not reach within time, which this Hon'ble Court did not wish to do so while declining to postpone the examinations".

Accordingly, the plea prays for the Court to take suo moto cognizance of the news reports and to direct the Respondents to conduct a re-test on a fresh date to allow those students who missed NEET exams due to such circumstances. It further prays for guidelines to be formulated for those students who may miss out on these exams due to some sufficient cause or the other.