PMLA Reverses Burden Of Proof Without Safeguards; Gives Unchecked Powers To ED To Take Over Properties : Singhvi To Supreme Court 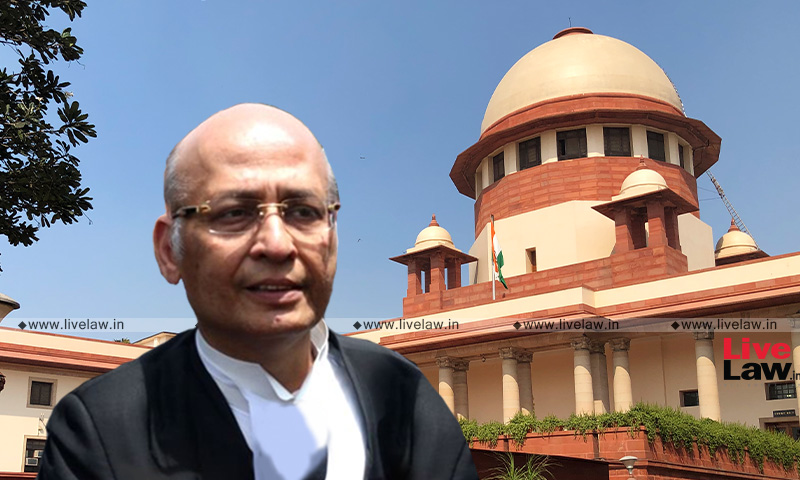 The Supreme Court on Tuesday continued hearing the batch of petitions concerned with the interpretation of the Prevention of Money Laundering Act, 2002 ("PMLA Act").The matter was listed before the bench of Justices AM Khanwilkar, Dinesh Maheshwari and CT Ravikumar.Submissions Of Senior Advocate AM SinghviSection 24 Gives Presumption Regarding The Offense Without Giving Any Safeguard With...

The Supreme Court on Tuesday continued hearing the batch of petitions concerned with the interpretation of the Prevention of Money Laundering Act, 2002 ("PMLA Act").

The matter was listed before the bench of Justices AM Khanwilkar, Dinesh Maheshwari and CT Ravikumar.

Submissions Of Senior Advocate AM Singhvi

With regards to section 24 of the PMLA Act, the senior counsel submitted that the section dealt with presumption of offence but it did not have any safeguards. Presenting a comparison between the burden of proof under PMLA and Indian Evidence Act, POTA, TADA, UAPA and NDPS, Senior Counsel said,

"There are more draconian laws than PMLA but the law doesn't shift the burden of proof on the accused. The entire burden never shifted the way PMLA under section 24 has done. The moment a charge is framed, suppose after charge any question is raised at charge stage & thereafter, how do I prove the negative. Trial judge-moment he frames the charges- it'll have a direct impact on criminal culpability. There are conditionalities, safeguard but there is no safeguard in sec 24 of PMLA. Its presumption regarding the offence without giving any safeguard with respect to the offence."

Section 24. Burden of Proof.—When a person is accused of having committed the offence under section 3, the burden of proving that proceeds of crime are untainted property shall be on the accused.

While the Senior Counsel was arguing on the aspect of reverse burden of proof u/s 24 of PMLA Act, Justice AM Khanwilkar, the presiding judge of the bench said, "Presumption is very limited that proceeds of crime are involved in law. Therefore proceeds of crime are firstly to be proved by the prosecution and then you have to prove that they are not proceeds of crime. As arguments of Mr Sibal, merely having proceeds of crime is not money laundering but it's when you project tainted into untainted. If that's so- then the section fits in appropriately."

Responding to the remarks posed by the bench, Singhvi said, "PMLA comes in when only the offense is complete when I take the third step, therefore it's intertwined. For eg I use the money that I have for expenditure without laundering or claiming- that's a positive act. I do nothing- claiming, projection without a positive act of projection, there is no offense of money laundering committed. It is a third level statute for laundering money which involves a positive act of projection. For these 3 ingredients- you are making a presumption of 3rd one & you are presuming the offense effectively."

Failure To Trace Doesn't Give You Power To Attach; Complete Omission Of Safeguard Can Allow The ED To Search Without Registration Of FIR; ED One Of The Most Draconian Departments Today But Without Judicial Guidance & Diktat, Mere Hope Will Not Do; Section 5(1) Second Proviso Cannot Operate As Umpire Itself

With regards to the search and seizure of any person and property u/s 17 and 18 of the PMLA, Singhvi argued that by a process of progressive amendment of 17 & 18 & by progressive omission of safeguard proviso, we have reached a stage where ED can search place or person without the existence of FIR in predicate offence.

"Alternatively, on mere information report or information in any manner of an offense without doing any investigation on the same day, on mere immediate registration of FIR, it can search person & place. This is one of the most draconian departments today but today without judicial guidance & diktat, mere hope will not do. There is no dog but the tail is wagging," Senior Counsel further submitted.

Arguing that under PMLA cases Magisterial involvement is replaced by the requirement of oversight authority and that search & seizure are conducted without any checks & balances, which is violative of Article 21, Senior Counsel said,

"Second proviso of sec 5(1) is either completely unconstitutional or significantly read down because it appears to operate independent of predicate offense & proceeds of crime & is not anchored in either."

Referring to the Top Court's judgment in Nikesh Tarachand Shah and on Anuradha Bhasin's judgment, the Senior Counsel argued that, "This is harassment. These will last forever & in a sense some of which your lordships can do, not strike down but sanitize it in a very good way. Failure to trace doesn't give you power to attach. Today the practical reality is that crime registered, proceeds of crime & existing property of old lineage & assuming that there is presumption, attachment is fastening as one of the easiest ways. You are not to find an easy path & use any property & any person in this casual manner & you're going far into constitutionality & there has to be a complete anchor."

On Taking Possession Of The Attached Property

On the aspect of possession of the attached property without adjudication at the threshold, Senior Counsel submitted that Section 8(4) of the Act was unconstitutional since it amounted to taking over valuable statutory rights thereby depriving the accused of possession without any statutory confirmation.

"Temporally 8(3)(a) can in actual practice continue indefinitely. Facially speaking the word "released" is only used in (6), so technically speaking there can be no release until acquittal. There is no provision for return of property, the only contemplation is that if you reach the stage of (6). Possession as matter of fact is against the spirit of object of attachment but as an interim measure "possession" does not fall into the same category. You're taking possession, that's more draconian since there has been no adjudication. This is manifestly arbitrary under Articles 14, 19 & 21. It's completely hit by proportionality & it shows harassment. You don't even have a time limit as to how long you'll exercise this possession," submitted Senior Counsel.

At this juncture, Justice AM Khanwilkar the presiding judge of the bench said, "Possession appearing in sub section 4 is for the purpose of confiscation. In between there is provision of release of property so therefore possession is preceding right before confiscation action. At the time of trial, attachment is fine till the end of trial. If there's acquittal then property will have to be released otherwise confiscated. By this interpretative process its separate clause but has to be read. It'll not come into play until conviction."

During the course of hearing, Senior Counsel while referring to the Rule 4 which deals with movable and immovable property and to emphasize on the wide interpretation of the term property, Singhvi said, "Words used are so wide that the shares transferred to ED- you can take the accused's share & ED can become the holder of the share, vote & throw out the person of the company. My own shares will be used by ED to vote against me. Action of possession is manifestly arbitrary."

Responding to the question posed by the bench, Senior Counsel said, "You as ED have vast powers to identify proceeds of crime, notify, seal & attach. I'll take the factory point. On the contrary usufruct must go on since it'll be idle with the ED. The trial takes place for 5 years but where would the usufruct go? Will ED run the factory? ED will not run the factory. What is the point of keeping the factory idle."

With regards the purpose that would be served by attachment of property, Singhvi argued that possession of attached property would not on the contrary harm public interest. To further substantiate his contention, Singhvi argued that, "Attachment sufficient & some safeguard is required so that attachment does not become a prob. In 95% cases, there is no compelling state interest. These are not items where full account of everything can be kept. You cannot proceed on the assumption that usufruct is tainted because I've already convicted you. We tend to forget that we have repealed Art 19(1)(f) but Art 300A is still there."

"Without possession there cannot be any confiscation. Therefore officers have to wait until there is finality. It'll depend on the nature of property involved- so that in a given case property is secured & value of property can be recovered" remarked Justice AM Khanwilkar.

"There is no restraint in the way it has been created. Other acts have been created carefully. Man may be in many cases acquitted, his life before acquittal is worse, he's suffered enough. Its conviction before conviction," submitted Senior Counsel to conclude his submissions on the aspect of possession of attached property.

No Scope Exists To Show That I Am Not Guilty Of Offense; Its Full Bar Dressed Up In Some Conditionality; No Way In Which Twin Conditions Can Be Applied In Accused's Favor: Senior Counsel For Section 45 of PMLA

Bescheeing the bench to tailor Section 45 of the PMLA which consist of twin conditions for grant of bail, Senior Counsel submitted that twin conditions create a bar on presumption of innocence which is the centerpiece and foundational pillar.

Senior Counsel submitted that at pre complaint stage if the PP opposes the accused's bail, the accused has nothing to show that he is not guilty of the offense. To further substantiate his contention, he said,

"At pre complaint stage, at best there is ECIR which is not disclosed & given to the accused. There is no case diary with the Magistrate. There is nothing pre complaint. PP gets up & says I oppose, how do I show that im not guilty? That means you are reversing the presumption of innocence that you shall remain in jail without possibility of bail because there is nothing with the accused to prove not guilty."

Singhvi further argued that even at the post complaint stage when the accused gets documents filed with statements, the accused has no opportunity of rebutting the statements since there is no cross examination or evidence at that stage.

Mooting on the absence of possibility of innocence, Singhvi said, "Post complaint I get documents filed with statements- there is no cross examination or evidence at that stage. Suppose the statement says XYZ has done money laundering- how do I oppose that? There is no possibility of innocence. It's actually a complete bar, unless except when the PP does not get up & says I oppose. PP should get up or not or should get up can be decided by 1000 extraneous factors. It's not possible for even the judge to grant bail if the PP gets up."

Referring to a scheduled offense which although bailable but would be hit by section 45 of PMLA, Singhvi said, "When the act was passed, some alignment should have been done. Here there's a bar. Main offense I do & I get bail as a right & when I come to. I don't get a special favor but a "disfavor". That's perverse, manifestly arbitrary- money laundering is connected with crime & proceeds of crime- original crime is bailable but in light of projection- it becomes non bailable. It becomes the most draconian blanket approach."

The bench would now continue the hearing tomorrow ie on February 9, 2022.