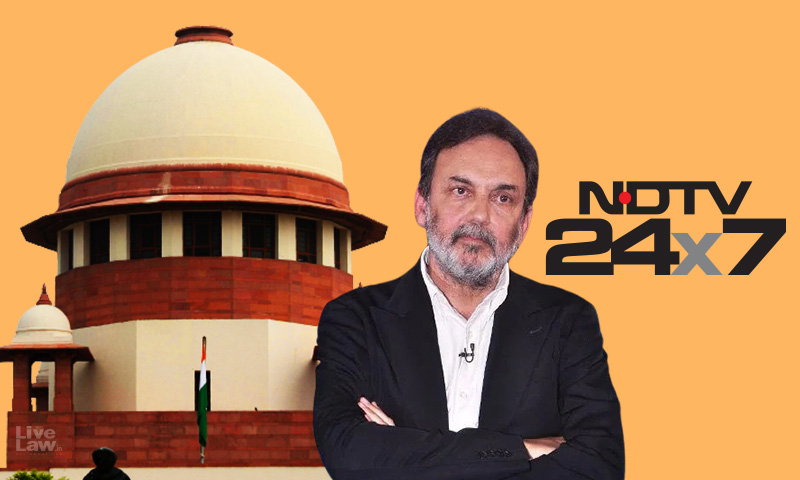 The Supreme Court on Thursday considered the appeals filed by NDTV promoters Prannoy Roy and Radhika Roy against an order of the Securities Appellate Tribunal which directed them to pay 50% of the "wrongful gains" found to have been made by them via insider trading." The Petitioners are husband and wife. They are the promoters of a popular news channel. The show-cause notice was issued to...

The Supreme Court on Thursday considered the appeals filed by NDTV promoters Prannoy Roy and Radhika Roy against an order of the Securities Appellate Tribunal which directed them to pay 50% of the "wrongful gains" found to have been made by them via insider trading.

" The Petitioners are husband and wife. They are the promoters of a popular news channel. The show-cause notice was issued to them after 10 years of the transaction. When the transaction is of 2007, the notice came to be issued in 2018, which is hopelessly barred by time. The allegation is that my clients, who originally owned hundred percent of the shareholding of NDTV, have disinvested and now only 52%...", began Senior Advocate Mukul Rohatgi for the petitioners.

"How much security are you willing to give?", asked the Chief Justice after a moment of conference with the other members of the bench.

"I can give an undertaking that I will not transfer any portion of my shareholding in NDTV without the permission of the tribunal. I have no other money. I have no other resources. This security, in terms of my shares and their value on the stock exchange, is much more than the amount of money in question, more than 15 crores. It is only a matter of 10 days, the matter is expected to be heard on February 11", argued Mr. Rohatgi.

"We understand your problem, your predicament. But you have to give some security. Otherwise the tribunal will not hear you", observed the CJ.

When Mr. Rohatgi urged that "we are a struggling news channel, we are hit very badly", repeating that he is willing to give an undertaking to the court in respect of advancing the shareholding as security, the Chief Justice enquired if they can give some guarantee.

"What is the value of the shares?", asked the Chief Justice.

"It is much more than the value of the money in question, more than 15 crores", replied Mr Rohatgi.

The bench asked the senior advocate to give definite figures and not make vague assertions. At this point, Mr. Rohatgi's instructing counsel, Advocate Fereshte Sethna, stepped in to explain that there are some 50 lakh shares which were trading at Rs.37 this morning on the stock exchange, coming to a value of 18 odd crores rupees.

The bench recorded Mr Rohatgi's submission that he has undertaken to submit a statement of the shares along with their value to the court, which the petitioners have agreed to offer as security in lieu of the deposit ordered by the Tribunal.

On November 27 last year, the Securities and Exchange Board of India(SEBI) had directed Roys to disgorge the amount of wrongful gain of ₹16.97 crores along with interest at the rate of 6% per annum from April 17, 2008, till the date of actual payment, within 45 days. The market regulator held that the NDTV promoters made wrongful gains by dealing in company shares in April 2008, while being in possession of Unpublished Price Sensitive Information (UPSI) pertaining to the proposed reorganization of the company.

Supreme Court to consider shortly the petitions filed by #NDTV promoters Prannoy Roy and Radhika Roy challenging the order of Securities Appellate Tribunal directing them to deposit 50% of the unlawful gains which the SEBI found to have been made by them by insider trading. pic.twitter.com/9s4VKBpWRu

The SEBI also banned Roys from buying, selling or otherwise dealing in securities, directly or indirectly, or being associated with the securities market in any manner, whatsoever, for a period of 2 years.

Aggrieved with this order, they approached the Securities Appellate Tribunal(SAT). On January 4, 2021, the SAT declined to grant a complete stay and directed them to deposit 50% of the penalty within 4 weeks.

It was challenging this order that they filed civil appeal in the Supreme Court.

The SEBI noted that the discussions pertaining to reorganization of the Company started on September 07, 2007 and the disclosure was made to the public post trading hours on April 16, 2008. Hence, the UPSI period was from September 07, 2007 to April 16, 2008 and, the trading window was required to be closed upto April 17, 2008 (till 24 hours after the UPSI was made public).