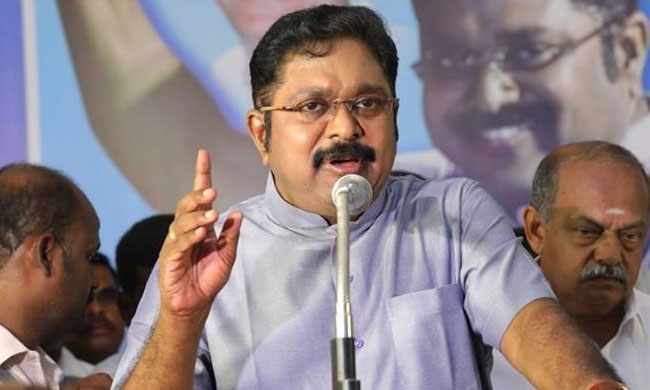 While refusing to acknowledge T.T.V. Dhinakaran-led Amma Makkal Munnetra Kazhagam's (AMMK) claim to pressure cooker as its symbol for the upcoming Lok Sabha polls and Tamil Nadu Assembly by-elections, the Supreme Court, in a relief to the faction on Tuesday, directed the Election Commission to allot any one of the free symbols to its candidates. While giving the directive, the Apex Court...

While refusing to acknowledge T.T.V. Dhinakaran-led Amma Makkal Munnetra Kazhagam's (AMMK) claim to pressure cooker as its symbol for the upcoming Lok Sabha polls and Tamil Nadu Assembly by-elections, the Supreme Court, in a relief to the faction on Tuesday, directed the Election Commission to allot any one of the free symbols to its candidates.

While giving the directive, the Apex Court Bench of Chief Justice Ranjan Gogoi and Justices Deepak Gupta and Sanjiv Khanna also clarified that the order will not amount to recognition of the group as a political party and its candidates will be treated as independents for all purposes of the elections.

The Court relief to the AMMK came on a petition by Dhinakaran against the Delhi High Court order allotting the AIADMK's Two Leaves party symbol to the EPS-OPS faction. It also came on the day which is the last day for filing nominations for the second phase of the Lok Sabha elections for Tamil Nadu's 39 Lok Sabha seats and the by-polls for 18 assembly seats.

As the hearing began, CJI Gogoi asked senior advocate Kapil Sibal representing the Dhinakaran group, as to why it did not apply for getting registered with the Election Commission and said granting its claim for a common symbol would be in contravention of section of 29 A of the The Representation of the People Act, 1951.

"Your claim to 'two leaves' symbol is now a closed (matter), the question is whetehr you are entitled to pressure cooker as a symbol. You can get pressure cooker as individuals but not as group. You should have registered with the Election Commission," said the CJI.

Sibal then said it takes months to get registered with the EC and pleaded for an interim arrangement insisting that Art 324 mandates the poll panel to ensuring a level playing field.

"I give an undertaking to register with the ECI but protect me," said Sibal arguing that in case a common symbol is not allotted the group, it will be a "walkover" for the E Palaniswami – O Paneerselvam (EPS-OPS) faction.

Coming down from its claim of pressure cooker, Sibal pleaded for any common/free symbol for all the candidates of the group saying that "59 different symbols will create chaos for the electorate".

"This anarchy...you have brought upon yourself," retorted the CJI yet again questioning the group's failure to apply for registration.

Subsequently senior advocate Abhishek Manu Singhvi representing the Dhinakaran faction submitted that applying for registration "would have amounted to giving up our claim as the real AIADMK".

"We are conceding that we should have applied. But in the interest of free and fair elections, give us a common symbol. However strong the name of a political party is, the reality is it is known by its symbol," argued Sibal,

As the CJI asked the EC if a common symbol could be allotted to all the 59 candidates, the poll panel's counsels and and the rival faction opposed the plea for grant of a common symbol saying any interim arrangement was not acceptable as the main matter was already disposed of.

Opposing the plea, the EC counsel said that procedures of nominations for independent candidates and those of registered political parties was different.

"In case of death of an independent candidate, the election is not countermanded. Such a plea will disturb the apple-cart of the entire scheme of things. There will be too many complications," said the EC counsel.

Appearing for EPS -OPS faction, senior advocate Mukul Rohatgi said : "Election symbol cannot be allotted on the premise that they will register."

The opposition counsel also said granting such a plea would also lead to complications in case of defection.

"What they are seeking is in fact is not a free symbol rather a reserve symbol like a political party. If such a plea is granted then more individuals may come and make similar demands," he said.

Countering the arguments, Sibal said the candidates for the 59 seats- 39 parliamentary constituencies in Tamil Nadu and one in Pudduchery and 19 for the Tamil Nadu Assembly byelections were finalised and submitted the list to the bench.

After hearing both the parties, the Bench said it cannot accept and acknowledge the Dhinakaran group's claim for pressure cooker as its symbol.

"The court is not inclined to give any recognition, however to ensure a level playing field in the parliamentary and by elections, we are of the view that the list of candidates submitted to us, any one of the free symbols be allotted to them upon the satisfaction of the Election Commission," ordered the CJI.

He also clarified that the order would not amount to recognition of the group or any part of it as a political party whether registered or not.

"All of the candidates in the list will be treated as independent candidates for all purpose," said the CJI.