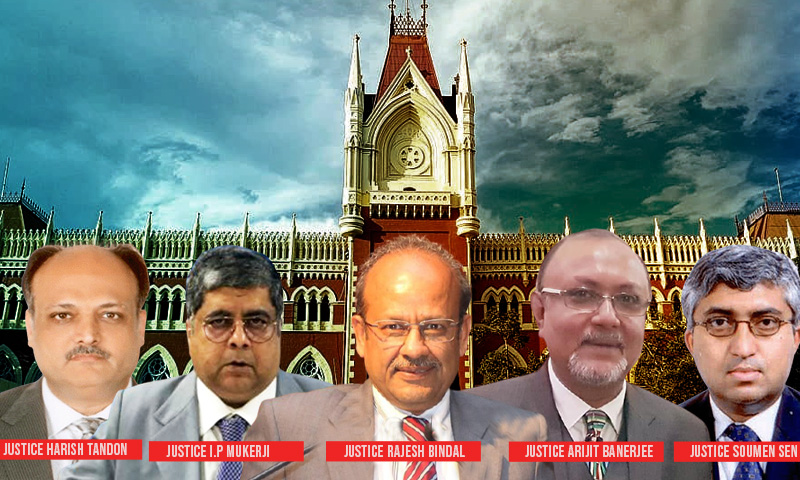 The Calcutta High Court on Thursday continued its hearing in the Narada case, in which the CBI has sought to transfer the trial and to declare that the hearing in the trial court on May 17 - which led to bail being granted to four TMC leaders - was vitiated on account of mob pressure. A 5-Judge Bench comprising of Acting Chief Justice Rajesh Bindal, and Justices IP Mukherjee,...

The Calcutta High Court on Thursday continued its hearing in the Narada case, in which the CBI has sought to transfer the trial and to declare that the hearing in the trial court on May 17 - which led to bail being granted to four TMC leaders - was vitiated on account of mob pressure.

Today, Solicitor General Tushar Mehta appearing for the CBI addressed the Bench of the issue of maintainability of the petitions, both before the Division Bench of the High Court on May 17 and the current proceedings before the Constitution Bench.

He insisted that numerical strength of the Bench is not a relevant consideration.

The Judge pointed out that the CBI made no mention of the provision under which it approached the Court on May 17, making it unclear as to which Bench was competent to hear the matter.

Justice Soumen Sen asserted that even if the Court declares that May 17 proceedings before Special Judge were vitiated due to alleged mobocracy, what would happen to rights of accused.

On May 17, a Division Bench of the High Court heard a letter petition filed by CBI and stayed the bail granted by the Special CBI Court at Kokata to four Trinamool Congress leaders - Firhad Hakim, Madan Mitra, Subrata Mukherjee and Sovan Chatterjee.

State has raised a preliminary objection to the 5-judge bench hearing the matter, stating that the case should have been referred to a third Judge in case of split in the Division Bench.

The State also argued that the letter petition filed by CBI on May 17 against order of Special Judge could not have been heard by a Division Bench; and should have been assigned to a Single Bench as per Calcutta High Court Appellate Rules.

In this backdrop, the Solicitor General argued:

"Numerical strength of Bench the is not and should not be a consideration for deciding this case… The Chief Justice is the Master of Roster. He could have taken the letter as a Single Judge but he in his wisdom assigned it to a Division Bench."

He referred to R. Rathinam v. State where it was held as under:

A similar ruling was made by a Constitution Bench of the Supreme Court in Central Board of Dawoodi Bohra v. State of Maharashtra, he said.

The Solicitor General also adverted to the Appellate Side Rules of The High Court at Calcutta to argue that both the Division Bench and the Constitution Bench were well within their rights to adjudicate the matter.

So far as competency of Constitution Bench is concerned, he referred to the proviso to Rule 1 under Chapter II of the Rules which provides that on requisition of Division Bench or whenever he thinks fit, Chief Justice may appoint a special Division Bench "consisting of 3 or more Judges" for hearing any particular appeal, question of law arising in an appeal, or any other matter.

He emphasized on the phrase '3 or more Judges' to argue that reference to larger Bench may be heard by a 5-Judges Bench.

He also adverted to Rule 6 of Chapter VII, Appellate Side Rules, which provides that in making reference to a Full Bench, the referring Judges may recommend to the Chief Justice, if they think fit, that a "Full Bench of five Judges" be constituted.

On the issue of May 17 Division Bench hearing, he stated that a letter petition is filed under Rule 57 under Chapter II of the Rules.

At this juncture, the Bench pointed out that the said provision refers to 'Modes of entertainment of PIL'.

"Letter petition can be sent under this Rule only. May 17 letter was sent in public interest as an immediate resort… Later on, a formal petition under Article 226 read with 227 and Section 428 read with 407 CrPC was filed."

Justice Soumen Sen told the SG that the CBI made no mention of the provision under which it approached the Court on May 17 and it was indefinite as to what was the legal character of the letter.

SG Mehta argued that the nomenclature of May 17 letter does not matter for purposes of adjudication. He referred to the case of Pepsi Foods Ltd. v. Special Judicial Magistrate, where the Supreme Court had held that nomenclature under which petition is filed is not quite relevant and that does not debar the court from exercising its jurisdiction which otherwise it possesses unless there is special procedure prescribed which procedure is mandatory.

"My petition is under Article 226 read with 482 CrPC which may be treated as a PIL because constitutional rights were violated," he added.

Justice Harish Tandon then pointed out that as a long standing practice, writ petitions go to Single Judge and LPAs are assigned to Division Bench.

However, the SG reiterated that Chief Justice being the master of roster, has ample power to place the matter before a Division Bench if he deems fit. In this regard, he referred to Rule 53 of the Appellate Side Rules that contemplate "inherent power of Court to make such orders as may be necessary for ends of justice or to prevent abuse of process of Courts."

He also cited the case of Rajasthan v. Prakash Chand, where it was held,

"The Chief Justice is the master of the roster. He alone has the prerogative to constitute benches of the court and allocated cases to the benches so constituted…the puisne Judges can only do that work as is allotted to them by the Chief Justice or under his directions."

He insisted that only two conditions are imperative: 1. The Chief Justice should allot; 2. The Statute should not prohibit it. He further argued that the power and prerogative of Chief Justice is so wide that he could have heard the matter himself as a Single Bench or could have referred the letter directly to a 5-Judges Bench.

Adequate opportunity to argue against grant of Bail not granted: SG Mehta

It is CBI's case that the alleged mobocracy vitiated the mandate of Section 439 CrPC for giving sufficient opportunity to the prosecution to argue its case.

"I was not allowed to come out. I had to argue through mobile. Case diary could not be presented. I asked for time as well, which was not granted," Mehta argued.

He referred to the case of Gulabrao Baburao Deokar v. State of Maharashtra, where it was held that the notice under the proviso under the Section 439 (1) implies a proper and full opportunity to the prosecutor to point out as to why bail should not be granted.

During the hearing, Justice Harish Tandon asked the Solicitor General that if the Bench accepts CBI's prayer and declares that proceedings were vitiated, can it not decide the bail petition itself? "Can we grant the bail or not?" Justice Sen joined.

Justice Mukerji asked if it is possible to transfer trial to another court on ground of being vitiated but order that the interim arrangement, i.e., interim bail ordered shall continue until bail is finally decided by that Court.

However, Senior Advocate Siddharth Luthra clarified that the Bail petitions have not been filed before the High Court by either party.

Public Perception not a ground to recall Bail: Dr. AM Singhvi

CBI has argued that the presence of protestors was intimidating enough to vitiate the entire atmosphere and leave an impression on the mind of a common man that the Justice system was stifled with.

Opposing this, Dr. AM Singhvi (appearing for the accused) submitted that there is no principle of law in any country which suggests that for looking at access to justice or obstruction, the perception of public is important.

Can Judicial Order Be Set Aside On Public Perception?Calcutta High Court Asks CBI In Narada Case

"Imagine the implication of perception argument- consequence is that mobocracy will become a self-fulfilling measure in every trial… If this is accepted, any protest on the streets of Kolkata would be obstruction. No actual obstruction will need to be shown. Only perception of common man would be required," he submitted.

The matter will now be taken up on Monday where Dr. Singhvi will address the Bench on following aspects:

1. On established principles of bail jurisprudence, should the May 17 order by Special Judge be reversed?

2. What is additional implication qua accused of admittedly not being heard on May 17 by Division Bench?

3. Prima Facie qua order of release of accused, is absence of sanction from competent authority severely damaging the prosecution's case?

4. Would it be valid exercise of S. 407 power to transfer the present case from Special Judge to any other Court?

5. Even if Issue 4 were answered in negative against CBI, should the Special Judge proceedings be declared null and void on a 226/227/482 basis?