Rape Laws Should Be Gender Neutral, Steps Required To Be Taken By Legislature Or Executive: Justice Shakdher In Marital Rape Judgment 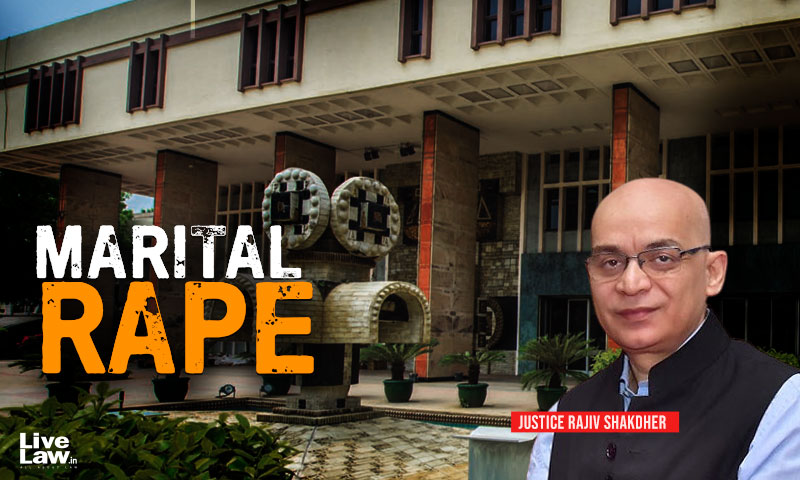 Justice Rajiv Shakdher of Delhi High Court, who ruled in favour of striking down the marital rape exception (exception 2 to Section 375 of the Indian Penal Code), acknowledges the need of having gender neutral rape laws while adding that the steps are required to be taken by the Legislature or Executive in this regard.

Delivering a split verdict in pleas seeking criminalisation of marital rape, Justice Shakdher agreed with the submissions made by Advocates J Sai Deepak and RK Kapoor, who appeared on behalf of the intervenors NGOs Men Welfare Trust and Hridaya, and observed thus:

"It is evident, like in other foreign jurisdictions, the Executive may have to provide sentencing guidelines for trial court judges to ensure greater consistency. Likewise, I also tend to agree with the counsel for the intervenors i.e., Messrs Sai Deepak and Kapoor that the law should be gender-neutral. These are steps that are required to be taken by the Legislature/the Executive."

It was argued by Advocate Deepak that if the international norms and standards are to be applied as argued by the petitioners then the movement all over is towards enacting gender-neutral laws in the realm of sexual violence. He also added that while Men Welfare Trust While actively campaigns for gender-neutral laws and the preservation of the institution of marriage, the petitioners had sought gender-specific prayers and the creation of gender-specific offences at the expense of marital institutions.

It was also submitted that the abuse of the provisions of Section 375 of the IPC has been recognised by the courts and, therefore, there is a need to introduce gender-neutrality in the sphere of sexual violence. Therefore, if Marital Rape Exception is struck down, it would only add to the existing inequities and injustice. It was also submitted that gender-neutral approach to such issues should be consistent with the calls for gender equity.

In this backdrop, Justice Shakdher however also agreed with the submission made by Senior Advocate Colin Gonsalves and Advocate Karuna Nundy, counsel for the petitioners, that reforms in this regard cannot be cited as an impediment in the court striking down the marital rape exception which otherwise does not pass muster of the constitutional provisions.

"These are the next steps in the matter which the legislature has to take up. The court's jurisdiction to examine the matter is not tied-in with these steps that the legislature may embark upon concerning sentencing and how investigation is to progress in matters involving marital rape. As and when such steps are taken, I am sure they will attract the public gaze and attention of all stakeholders and if escalated to the court, may also require judicial examination. However, these are not matters presently within the ken of the court," the Court said.

Accordingly, Justice Shakdher held that the impugned provisions i.e. Exception 2 to sec. 375, 376B of the IPC as also sec. 198B of the CrPC, insofar as they concern a husband or separated husband having sexual communion or intercourse with his wife (who is not under 18 years of age), albeit, without her consent, as violative of Articles 14, 15, 19(1)(a) and 21 of the Constitution and struck them down.

The aforesaid declaration would, however, operate from the date of the decision, the Judge added.

Justice Shakdher also held that the offending husbands do not fall within the ambit of the expression "relative" contained in Section 376 (2)(f) of the IPC and, consequently, the presumption created under Section 114A of the Evidence Act will not apply to them.

The Court yesterday passed a split verdict on a batch of petitions challenging the exception to Section 375 of the Indian Penal Code, which exempts forceful sexual intercourse by a man with his own wife from the offence of rape.

However, Justice C Hari Shankar said that he does not agree with Justice Shakdher. Justice Harisankar has held that Exception 2 to Section 375 does not violate Constitution and that the exception is based on an intelligible differentia.

All reports from the judgment can be read here:

Assumption That Wife Forced To Have Sex With Husband Feels Same Degree Of Outrage As Woman Raped By Stranger Is Unrealistic : Justice Hari Shankar