'Right To Access Internet Is Part Of Right To Privacy And Right To Education' : Kerala HC [Read Judgment] 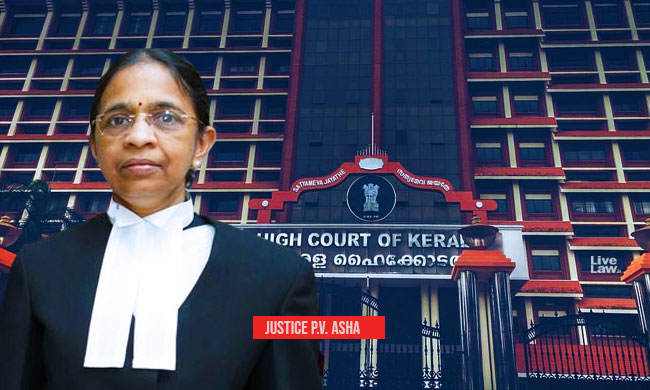 (Updated with Judgment)In a landmark judgment, the High Court of Kerala on Thursday declared that right to access internet is a fundamental right forming part of right to privacy under Article 21 of the Constitution of India. The Court added that it also forms part of right to education.The declaration was given by a single bench of Justice P V Asha while allowing a petition filed by...

In a landmark judgment, the High Court of Kerala on Thursday declared that right to access internet is a fundamental right forming part of right to privacy under Article 21 of the Constitution of India. The Court added that it also forms part of right to education.

The declaration was given by a single bench of Justice P V Asha while allowing a petition filed by a student challenging restrictions on usage of mobile phones in a girls' hostel.

"When the Human Rights Council of the United Nations have found that right to access to Internet is a fundamental freedom and a tool to ensure right to education, a rule or instruction which impairs the said right of the students cannot be permitted to stand in the eye of law", the Court said in the judgment.

The petitioner Faheema Shirin, a third semester B.A English student of Sree Narayana College, Chelanur, Kozhikode, had approached the High Court through a writ petition after she was expelled from the College hostel for not abiding by the restrictions on using mobile phone. As per the rules of the girls' hostel, inmates were prevented from using mobile phones from 6 PM to 10 PM every day.  She, along with few other inmates, had protested the restriction as it was hampering their learning process by depriving them of access to information.

The Court accepted the petitioner's contention that the restriction placed on access to internet by curtailing the use of mobile phones amounted to a violation of fundamental right to freedom of speech and expression under Article 19(1)(a) of the Constitution of India. It also agreed with the petitioner that internet, accessible through mobile phones or laptops, provided an avenue for the students to gather knowledge as well as to express themselves.

Petitioner's counsel Advocate Legith T Kottakkal drew Court's attention to the fact that the United Nation's General Assembly had declared right to internet to be a human right in 2014.

Citing the Vishakha judgment of the Supreme Court, Justice Asha held that rights declared by UN bodies can be read into Indian law.

"As rightly pointed out by the learned counsel for the petitioner, the Apex Court has in Vishaka & Ors. v. State of Rajasthan & Ors. [AIR 1997 SC 3011 : (1997) 6 SCC 241] held that in the light of Article 51(c) and 253 of the Constitution of India and the the role of judiciary envisaged in the Beijing Statement, the international conventions and norms are to be read into the fundamental rights guaranteed in the Constitution of India in the absence of enacted domestic law occupying the fields when there is no inconsistency between them.

Going by the aforesaid dictum laid down in the said judgment, the right to have access to Internet becomes the part of right to education as well as right to privacy under Article 21 of the Constitution of India"

The petitioner referred to the Budget Speech made by Kerala Finance Minister Dr Thomas Issac in 2017, where it was announced that Kerala Government had recognized 'right to internet' as a human right and was making efforts to make internet accessible to all. Reference was made to the Information Technology Policy of the Kerala Government, as per which Government was stated to be adopting "mobile first" approach for e-governance services by leveraging high mobile penetration and coverage in the State.

Mobile phones, once a luxury, have now become become "part and parcel of the day to day life and even to a stage that it is unavoidable to survive with dignity and freedom", observed the Court.

Easy access to internet through mobile phones will aid the education of students, the Court added.

"A student above the age of 18 years shall be given the freedom to choose the mode for her studies provided it does not cause any disturbance to others. The schools in Kerala promotes digitalisation with smart class rooms and the modern technology has taken its place in all the fields even from primary section. Thus the usage of mobile phones in order to enable the students to have access to internet will only enhance the opportunities of students to acquire knowledge from all available sources based on which they can achieve excellence and enhance quality and standard of education".

The petitioner also highlighted that the mobile restriction was discriminatory on the grounds of gender as such restrictions were not imposed in the boys' hostel.

The hostel authorities maintained that the restriction was in the interests of students' discipline to ensure that they study without distractions.

The Court however found no nexus between restricting mobile usage and discipline of students. When there is nothing to show that there was any act of indiscipline on account of the usage of mobile phone by the petitioner, the restrictions cannot be sustained, the Court observed.

"It should be left to the students to choose the time for using mobile phone. The only restriction that can be imposed is that they should not cause any disturbance to other students. While acting in exercise of right to privacy, persons like the petitioner shall also see that such exercise does not invade the right to privacy of another student residing in the hostel especially in her room", Justice Asha said.

Software Freedom Law Centre, an organization rooting for internet freedom, had intervened in the case, supporting the petitioner's right to access internet.

The petition had also referred to Clause 3.2.(13) of UGC (Prevention, Prohibition and Redressal of Sexual Harassment of Women Employees and Students in Higher Educational Institutions) Regulations, 2015, which states that "Concern for the safety of women students must not be cited to impose discriminatory rules for women in the hostels as compared to male students".

Last February, the High Court had struck down gender discriminatory rules in a hostel, observing that girls have equal freedom as boys. In that case (Anjitha K Jose v State of Kerala), the girls were restricted from attending political meetings, going for movies etc. Quashing the rules, Justice Muhamed Mustaque said :

The fact that parents have consented to the restrictions will not make them valid, as students who have attained majority have decisional autonomy, the Court had added in that decision.