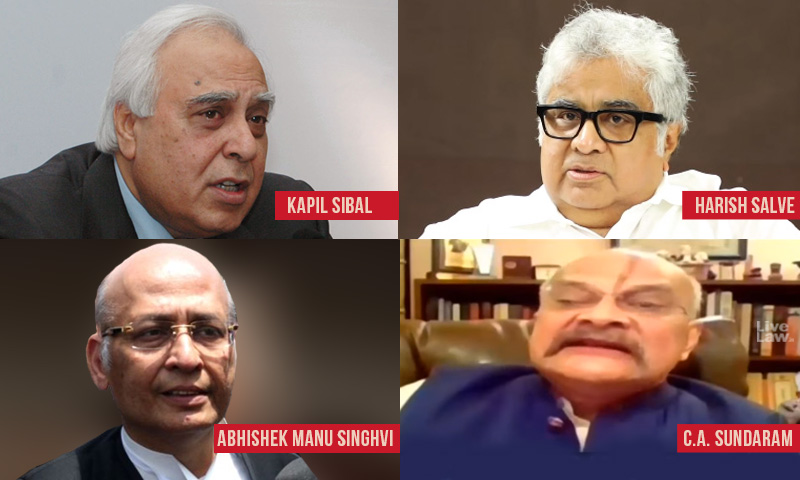 Senior Advocates Kapil Sibal, Harish Salve, Dr Abhishek Manu Singhvi and C Aryama Sundaram discussed the problems on 'media trial' in a virtual debate hosted by NewsX on the topic 'pros and cons of media trial' as part of Ram Jethmalani Memorial Lecture.The comments of the senior lawyers assumed relevance in the context of the coverage of the death of Bollywood actor Sushant Singh Rajput,...

The comments of the senior lawyers assumed relevance in the context of the coverage of the death of Bollywood actor Sushant Singh Rajput, which attracted criticism from several quarters for public vilification of the accused and for holding a parallel investigation.

The Bombay High Court recently observed that the media should observe restraint while reporting the case so as not to interfere with the police investigation.

'Media can make a hero turn into a villain in not time' : Kapil Sibal

Sibal, the first speaker at the session, started by expressing concerns about media acting as a 'public court', and pronouncing guilt verdict even before the completion of formal investigation and trial in accordance with law.

"The media looks upon discovery of facts as a way of earning TRP, to gain more audience. They bother less about the credibility of source", he said.

Adding that the media often distort facts to sensationalize events, he said they "can make a hero turn into a villain in no time at all".

"Today the media has reincarnated itself into a public court. They do not just make suggestive innuendos but direct allegations. And some of them even instigate violence", he said.

All norms laid down for ethical journalistic practices are being violated by media on a day to day basis while reporting on crime and investigation, he said.

He cited the example of the 2G case, which according to him was propelled by a baseless media campaign. The Courts acquitted the accused in the 2G case but the media trial badly affected the telecom sector, which was then booming.

He suggested that the media should work as a stand-alone business, following the example laid down by Ram Nath Goenka with respect to the Indian Express group. This, according to him, will ensure that media will function in pursuance of their true journalistic duties, without any conflict of interest or vested interests.

'Rule of noise' has replaced 'rule of law':Harish Salve

He commented that the Indian judicial system in high profile cases has become a "circus" and that the media does not believe in anything called the law of evidence.

"Trial by court of law has been replaced by trial by embarrassment", he lamented.

In contrast with India, media in countries like the UK and the USA exercise restraint while reporting on crime.

But in India, before even an investigation is afoot, there is a clamour for arrest. When the clamour becomes deafening, arrest is made, and guilt is pronounced by media, he added.

He cited the example of Sunil Mittal, who was an accused in the 2G scam case. Though the only evidence for conspiracy cited by the CBI was that he had attended the wedding of the daughter of the telecom secretary, Salve said, the media reports thundered "CBI nailed him".

The Courts threw out the CBI evidence; but by that time, enough trauma had been caused to Mittal and his family.

Commenting that the unbridled functioning of social media was a threat, he said :

"Now there is a dangerous cocktail of electronic media and social media. Social media has put the power of publication in the hands of everybody who has an opinion and who has a bias. Anything written in WhatsApp is taken as gospel truth. This gets picked up the electronic media".

He expressed the view that this atmosphere was the biggest impediment to India's progress. Foreign investors are wary of investing in India because of the fear of harassment, he said.

"Despite the Bhopal tragedy, Warren Anderson was not arrested. Can that be imagined today? Someone recently filed a complaint in Bihar against the Chairman of Samsung for losing dealership of mobiles and court issued summons. Why? Because media said 'rich vs poor''", he said.

As regards the coverage of the Sushant Singh-Rhea Chakraborty case, Salve said that he won't say much except that "it would scare anybody who has practiced law and is familiar with the criminal justice system".

Coming to the means to fix this problem, Salve ruled out government control.

"Anything worse than a reckless media is a government tamed media. I don't believe that the Ministry of Information and Broadcasting has any business in interfering with the content", he said.

He suggested that the control should come from the Courts, laying down the lakshman-rekha which the media should not cross.

In this regard, he said that he had made a proposal to the Law Ministry earlier to set up special tribunals to try civil defamation cases, which will deliver judgments in six months.

"In UK , civil defamation cases are fast-tracked. If we have a tribunal in India, presided over by a retired judge, which can have simpler laws, not the CPC, which takes defamation cases on priority, which will deliver judgment in 6 months, it will tame media. I don't believe in arresting journalists and throwing them to jail. That is not the way to do it", he said.

Here, no one has any problem with lying because civil defamation cases drag on, he said.

There has also to be a system within police force to check media leaks, he said.

When media claim the exalted status of the fourth pillar of democracy, Dr A M Singhvi said, then they have to be prepared to face the slings and arrows of scrutiny, just as much and more as the other three pillars.

While acknowledging that the media has done some "sterling work" in investigation and news-gathering, he bemoaned that the aberrations in media are now getting bigger and bigger these days.

"Indian media has plummetted in the wrong direction in the equation between sense and sensationalism, chaos and civility, news and noise, balance and extremism", he said.

"Time may not be far where we have to invent new offences of "verbal terrorism", "visual extremism", and "content fundamentalism".

I can derive all three from showing actual clips of the media. This has a lot to do with the toxic triangle of "viewership, ratings and revenue.

If you add to this toxic triangle the doses of politics, glamour, insidious govt control, premeditated and motivated stance, ambitious anchors and a public baying for blood - it becomes a heavy cocktail which would make the manufacturers of whiskey, vodka blush", the senior lawyer said.

He expressed astonishment that several anchors and journalists have "mortgaged their calling and conscience for the temporary lure of wealth and power".

Compassion and analysis have been replaced with glee at someone else's misfortune, he said.

Commenting on the topic, he said that he cannot think of any 'pros' for media trial.

"The object of media trial is to create a perception of reality. The merits and the outcome become immaterial. No second thought is given about taking a side and pronouncing verdict of guilty by playing the roles of prosecutor, jury and executor", he said.

As a panacea, he also ruled out external regulation, and advocated self-regulation but not in the present form.

The Press Council of India is worse than a paperless tiger, he said. The News Broadcasters Association (NBSA) is also "woefully inadequate" in dealing with the problem.

There is a conspiracy of silence and a clan-feeling which defeats peer review, he said.

He advocated a stronger role for these self-regulatory bodies, and said that the violators should be 'named and shamed'.

"It is time to 'name and shame' your peers. Because these bad apples will take you down as well. It is not enough that you remain a good apple", he warned.

He suggested that the NBSA guidelines should be adopted by the Ministry of Information and Broadcasting so that they can have a statutory character so as to bind the non-members.

Further, he called for an independent rating agency.

"There is an urgent need for an independent rating agency. King of media is the 'TRP'. We have 44,000 measuring meters in this country in a country of 130 crores. This is the sample that drives the media. This, with a sleight of the hand algorithm, decides what the country should watch".

Lastly, he stressed that the conflict of interest of media houses should be addressed. In this regard, he referred to the Broadcasting Bill, which was proposed many years ago. It had provisions for specified ownership in media and addressed simultaneous cross-holding in media and some other prohibited sectors.

"We need Chinese walls between these kinds of conflicts of interests", Singhvi said in conclusion.

Loss of faith in institutions reasons for the emergence of media as the court of public opinion: C A Sundaram

Senior Advocate C Aryama Sundaram said that he wished to play the 'devil's advocate' by striking a note different from the previous speakers, by attempting to trace out the reasons for the massive public support for media campaigns.

"If you had the 1st, 2nd and 3rd estate behaving properly, the 4th estate (media) will not be able to convert public opinion".

"There is an institutional failure in India. How is the media so involved in the investigative progress? Because people have lost faith in the police. People believe the police is corrupt. The public perception is that the rich can buy himself out.

The media has been given the opportunity to channelize the thinking of the public because the citizen doesn't have anywhere else to look", he added.

"Whether we like it or not, media has become a public court and has made itself a court of public opinion. Media is doing that because the public has lost faith in looking anywhere else. Public opinion is listening to the fourth estate because of the failure of other estates".

He said that there is a need to improve the faith among the people in other institutions, so that would disbelieve the narrative of the media and call out its non-sense

He reminded that while the right to freedom of speech and expression is a fundamental right, right to free and fair trial is a basic human right, which is absolute and cannot be taken away at all.

"The media as a watchdog of public opinion and interest - that is wonderful. But let the media not become a guard dog for the blind leading the public as if they are blind", he said in conclusion.