[Breaking] Sabarimala Reference : SC Holds That Questions Of Law Can Be Referred To Larger Bench In Review [Read Order] 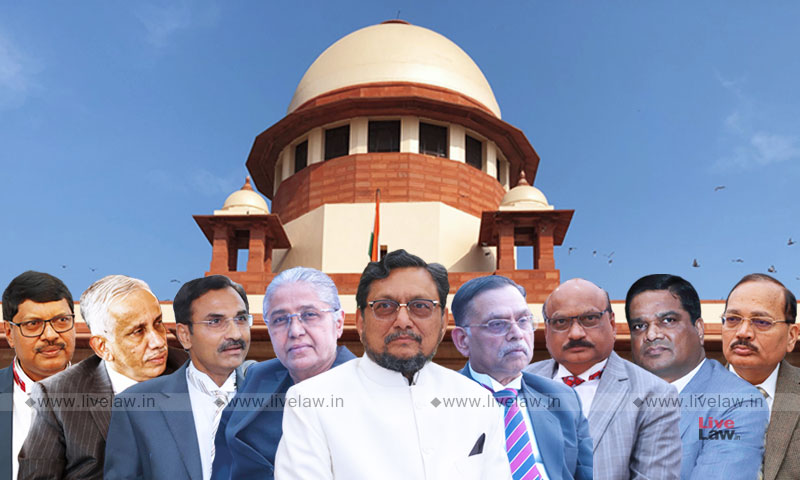 The 9-judge bench of the Supreme Court has held that a bench can refer questions of law to larger bench even in review jurisdiction.The bench led by CJI SA Bobde has framed seven issues for the consideration in the case.The bench has not given reasons for it conclusion. The order states "For reasons to follow, we hold that this Court can refer questions of law to a larger bench in a...

The 9-judge bench of the Supreme Court has held that a bench can refer questions of law to larger bench even in review jurisdiction.

The bench led by CJI SA Bobde has framed seven issues for the consideration in the case.

The bench has not given reasons for it conclusion. The order states "For  reasons to follow, we hold that this Court can refer questions of law to a larger bench in a review petition".

1. What is the scope and ambit of right to freedom of religion under Article 25 of the Constitution of India?

4. What is the scope and extent of the word 'morality' under Articles 25 and 26 of the Constitution of India and whether it is meant to include Constitutional morality?

5. What is the scope and extent of judicial review with regard to a religious practice as referred to in Article 25 of the Constitution of India?

6. What is the meaning of expression "Sections of Hindus" occurring in Article 25 (2) (b) of the Constitution of India?

The Court will start day to day hearing in the case from February 17. 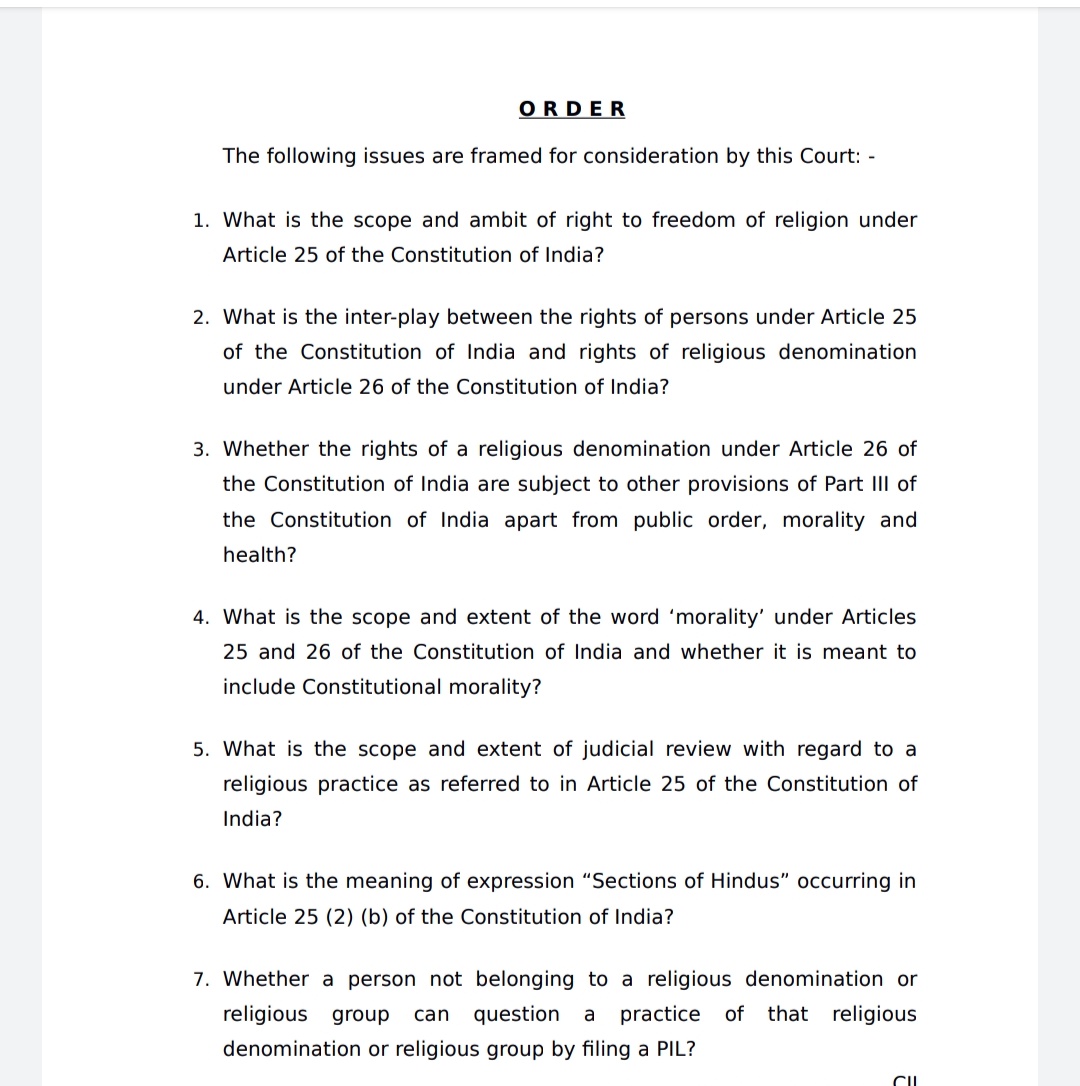 On February 6, the 9-judge bench of the Supreme Court constituted to answer the questions mentioned in the Sabarimala review had reserved orders on the preliminary issue whether a reference is possible in a review petition.

"Whether this Court can refer questions of law to a larger bench in a review petition?" - this was the preliminary issue considered by the Court.

The arguments on Thursday was started by Solicitor General Tushar Mehta, who supported the reference on behalf of the Central Government.

He said that the reference had nothing to do with Sabarimala review. The Sabarimala review bench had not referred the review to the larger bench, but certain larger questions on religious rights and scope of judicial interference on them.

He said that technicalities should not fetter the jurisdiction of the Court. The decision of SC in Navtej Johar case, where a 5-judge bench struck down Section 377 of IPC even as the curative petition against the 2013 decision of 2-judge bench which had upheld the provision was pending, was cited by the SG to state that the Court can consider the issue, regardless of technical hurdles.

"If there's a question of law, the Court has the liberty to constitute a larger Bench to settle the issues. As custodian of Fundamental Rights, it is the duty of the court to lay down an authoritative pronouncement on these questions of law", SG said.

Senior Advocate F S Nariman submitted that the reference was not maintainable. It was submitted by the renowned jurist that the scope of review was very narrow to examine the correctness of the original judgment on limited grounds. Therefore, the review jurisdiction cannot be invoked to refer to larger bench certain questions of law, which are not directly arising from the original judgment, submitted Senior Advocate Nariman.

He remarked that the order passed by the Sabarimala review bench on November 14, 2019 was an 'adjournment order' and not a reference.

"You cannot indulge in the exposition of law outside the facts of the case.", he said. Nariman also highlighted that there was no 'inherent' power of review.

Senior Advocate Indira Jaising submitted that it was not clear if the November 14, 2019 order in Sabarimala review was passed in the review petitions or in the writ petitions which were filed challenging the original judgment passed in September 2018. She supported Nariman's argument that such a reference in review was impermissible.

"Only after demonstrating that there is a prima facie error can a reference be made on the review", Jaising said.

Senior Advocate Rakesh Dwivedi submitted that the "platform" of review cannot be used to decide the prospects of a future reference.

"Nature of review proceedings and that of reference are totally different. They are in conflict. As between the parties to the original litigation, the question can only be opened if parameters of review petition are met. The lis between the parties can't be reopened if there's no error on the face of the record. Reference will bind everyone in the future. But, in review, the parties to the litigation will be affected. Review cannot be decided post the reference. If it does, then the question of law which is decided in the reference, will become a ground in the review. It becomes an appeal", he said.

"If you hear the reference post the review, the lis will be opened again. It will no longer be res judicata between the parties. The conflict is that you cannot review a case based on law which is newly decided in the reference", Gupta continued.

Permitting reference on a question of law in the guise of a review would amount to an appeal, submitted Senior Advocate Shyam Divan.

"We cannot have a catalog of questions which are randomly put up", Divan said, questioning the rationale of reference of questions of law in review, without finding fault in the original judgment.

Senior Advocate Dr AM Singhvi supported the reference citing the inherent unlimited powers of the Court. Singhvi reminded the Court that the Sabarimala judgment came in a PIL, which used the liberal jurisdiction of the Court. Therefore, the petitioners cannot now turn around to plead for narrow exercise of court's jurisdiction.

Singhvi also cited Navtej Johar case to support the reference. At this juncture, Jaising intervened to state that Navtej Johar decision came in a writ petition, and the situation was different from the present proceedings arising out a review petition.

Senior Advocate K Parasaran said "This is the highest court of the land and can exercise unlimited jurisdiction and discretion".

CJI Bobde at this juncture told Parasaran "By making a reference order, the court has not prejudicially affected anyone's rights."

Senior Advocate V Giri said that there was no express Constitutional bar in hearing the reference.

"Unless the Constitution provides a bar, we cannot read into it a bar", he said. He also pointed out that the Sabarimala review is not being considered and the same has been kept pending.

On January 13, the CJI had asked the lawyers in the case to have a conference for re-framing the issues. This was after the bench agreed with the submissions that the 7 questions mentioned in the order passed by the Sabarimala review bench on November 14, 2019 were too broad.

After that, the lawyers had a conference on January 17, but could not reach a common ground regarding the issues. On February 6, the bench agreed to consider the preliminary issue of maintainability of reference.

On November 14, a 5-judge bench headed by the then CJI Ranjan Gogoi observed by 3:2 majority that certain issues in the Sabarimala review were common to the pending cases concerning women entry in Mosques, validity of the practice of Female Genital Mutilation among Dawoodi Bohra community and the right of Parsi women who had married outside community to enter Fire Temples.

According to the November 14 order, the following are the issues, that 'could' arise for the consideration of larger bench :