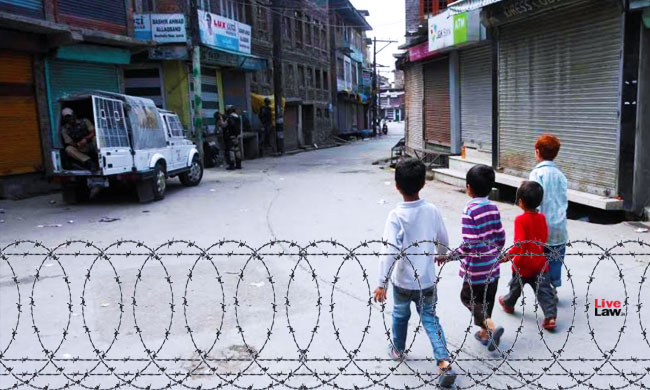 The Supreme Court on Friday expressed satisfaction with the fresh report submitted by Jammu and Kashmir Juvenile Justice Committee which stated that no minors were under illegal detention in the region.Based on this, a bench headed by Justice Ramana disposed off the Public Interest Litigation (PIL) filed by child rights activists Enakshi Ganguly and Shanta Sinha.The bench has however...

The Supreme Court on Friday expressed satisfaction with the fresh report submitted by Jammu and Kashmir Juvenile Justice Committee which stated that no minors were under illegal detention in the region.

Based on this, a bench headed by Justice Ramana disposed off the Public Interest Litigation (PIL) filed by child rights activists Enakshi Ganguly and Shanta Sinha.

The bench has however granted petitioners liberty to move 'appropriate forum' if there is any material showing illegal detention of minors in any particular case. The bench has also directed the J&K administration to give psychological assistance from the Institute of Mental Health and Neurosciences, Kashmir to those minors who were detained.

The same bench had earlier set aside the first report submitted by the Committee on the ground that it had merely forwarded the findings of the J&K police without independent application of mind.

Senior Advocate Huzefa Ahmadi, appearing for the petitioners, sought to have a copy of the new report. The bench said that it can give a copy of the report, but will not entertain any challenge against the findings.

The bench, also comprising Justices Subhash Reddy and B R Gavai, said that it has examined the report and found it to be satisfactory. The Committee, comprising four HC judges, have inspected jails and conducted field visits, to report that no child was detained illegally.  All detentions were in accordance with law, the report said.

Contesting the legality of detentions, Ahmadi submitted that law prohibited preventive detention of minors. Children cannot be held under preventive detention either under Section 107 of the Code of Criminal Procedure or under the Public Safety Act, he submitted. The undisputed facts of the report showed that the detentions are illegal, Ahmadi urged.

Justice Gavai interjected at this point to say :

"But they were released the same day. Are you aware what 15 year olds are capable of doing these days".

Justice Gavai added that the bench would prefer to go by the findings of HC judges than the reports of international media regarding illegal detention of children.

Justice Reddy asked if it can be termed detention when many were released after few hours.

"It has happened in Hyderabad too where people are restrained for a while and released. Can we call it detention?", Justice Reddy remarked.

Solicitor General Tushar Mehta submitted that the findings of the Committee comprising four HC judges cannot be called in question.

"Does a lady sitting in Delhi decide what is happening in J&K?", the SG said, referring to the petitioner.

The bench finally said that it has gone through the report, spent an hour on it, and has learnt that the HC judges had personally inspected jails and found nothing adverse.

"It would hamper the image of judiciary if this bench was to go into it", said Jusice Ramana.

Ultimately, the bench disposed of the matter, saying it cannot sit in appeal over the factual findings in the report.

The Committee had first submitted a report on October 1 stating that 144 children were detained in Kashmir since August 5, following the revocation of special status of the State. Quoting the report of the J&K police, the Committee said that all of them were dealt with in accordance with the procedure under the Juvenile Justice Act and none of them were under unlawful detention.

Disputing the correctness of this report, the petitioners highlighted that preventive detention of juveniles was barred under law. The petitioners also submitted that the committee had simply forwarded the reports of the J&K police without any independent application of mind.

Based on this, the Court had asked the Committee on November 5 to submit a fresh report on the allegations of detention of minors in Kashmir, after addressing all issues independently.