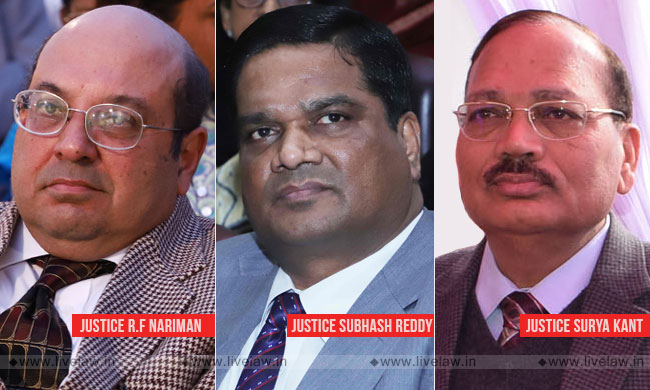 The Supreme Court on Thursday confirmed by 2:1 majority death penalty to a man found guilty for murder and rape of a two year old girl.While the majority comprising Justices R F Nariman and Surya Kant upheld the death penalty confirmed by the Bombay High Court in the case Ravi v State of Maharashtra, Justice Subhash Reddy dissented.The majority judgment took note of the fact that...

The Supreme Court on Thursday confirmed by 2:1 majority death penalty to a man found guilty for murder and rape of a two year old girl.

The majority judgment took note of the fact that the Parliament has thought it fit to award death penalty for child rape by amending POCSO Act in 2019. Though the amendment was not applicable to the case, as the offence took place in 2012 , the majority said that this fact should be borne in mind while evaluating the case.

"If the Parliament, armed with adequate facts and figures, has decided to introduce capital punishment for the offence of sexual abuse of a child, the Court hitherto will bear in mind the latest Legislative Policy even though it has no applicability in a case where the offence was committed prior thereto", observed the majority judgment authored by Justice Surya Kant.

The Court noted that the the victim was barely a two-year old baby whom the appellant kidnapped and apparently kept on assaulting over 4-5 hours till she breathed her last.

"The unnatural sex with a two-year old toddler exhibits a dirty and perverted mind, showcasing a horrifying tale of brutality

The appellant meticulously executed his nefarious design by locking one door of his house from the outside and bolting the other one from the inside so as to deceive people into believing that nobody was inside. The appellant was thus in his full senses while he indulged in this senseless act.

Appellant has not shown any remorse or repentance for the gory crime, rather he opted to remain silent in his 313 Cr.P.C. statement. His deliberate, well-designed silence with a standard defence of `false' accusation reveals his lack of kindness or compassion and leads to believe that he can never be reformed. That being so, this Court cannot write off the capital punishment so long as it is inscribed in the statute book.", said the majority judgment

Justice Subhash Reddy observed that it was not a "fit case for death penalty".

It was noticed that the murder was not pre-planned or pre-meditated. The offence was committed under the influence of alcohol. The appellant was aged 25 years and had no criminal antecedents. These factors should be taken as mitigating circumstances for commuting death penalty. The prosecution had not established any facts to show that the appellant was beyond rehabilitation or reformation.

"As such, it is clear that on the day of occurrence, he was under influence of liquor and he is aged about 25 years and he had no previous history of any crimes and in absence of any evidence from the side of the prosecution to show that he cannot be reformed and rehabilitated to bring in to the main stream of the society, the judgments relied on by learned counsel for the appellant, fully support the case of the appellant, to modify the sentence".

"In the case on hand, where it is clear from the evidence on-record that the appellant was under influence of liquor and committed the offence, cannot be termed as a pre-planned one, to count the same as an aggravating circumstance, for balancing aggravating and mitigating circumstances".

"In this case on hand, the conviction of the appellant is mainly based on circumstantial evidence. On this ground also, I am of the view that the death sentence, imposed on him, is to be modified", added the dissenting judgment.

Assessing the socio-economic status of the appellant, the judge noted that the appellant belonged to below poverty line category. This is also a mitigation factor.

Departing from the approach of the majority, Justice Reddy said that POCSO amendment carried out in 2019 cannot be taken into consideration in the case, as the offence took place much ago. The death sentence was converted to life imprisonment for the offence under Section 302 IPC.

"I am clear in my mind that in this case on hand, the mitigating circumstances of the appellant, dominate over the aggravating circumstances, to modify the death sentence to that of life imprisonment. Even as per the case of prosecution, the appellant was under influence of liquor at the time of committing the offence, and there is no evidence on record from the side of prosecution, to show that there is no possibility of reformation and rehabilitation of the appellant. Further, age of the appellant was 25 years at the relevant time and conviction is solely based on circumstantial evidence. Taking all such aspects into consideration, the death penalty imposed on the appellant is to be modified to that of life imprisonment, for the offence under Section 302 IPC", concluded the dissenting judgment.