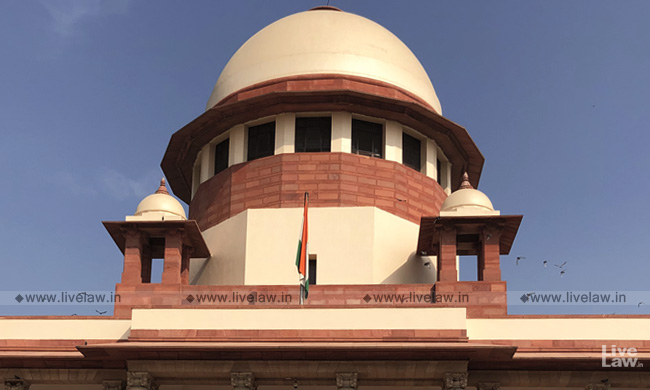 On Friday the Supreme Court dismissed a challenge to the Constitutional validity of certain Resolutions and Rules of the Delhi High Court which outline the criteria for a Judicial Officer to be appointed to the post of District and Sessions Judge. The Bench comprising of Justices AM Khanwilkar and Dinesh Maheshwari rejected Additional District and Sessions Judge Sujata Kohli's plea of...

On Friday the Supreme Court dismissed a challenge to the Constitutional validity of certain Resolutions and Rules of the Delhi High Court which outline the criteria for a Judicial Officer to be appointed to the post of District and Sessions Judge.

The Bench comprising of Justices AM Khanwilkar and Dinesh Maheshwari rejected Additional District and Sessions Judge Sujata Kohli's plea of being denied a fair and reasonable consideration for promotion. On the contrary, it was observed that the High Court had adopted a reasonable and balanced approach in implementing revised criteria for promotion from the Delhi Higher Judicial Services (DHJS).

The Court concluded that no prejudice was caused to the appellant by the HC in the matter of grading.

"we are clearly of the view that providing for the norms for assessment of the comparative merits of the candidates in the zone of consideration, was squarely within the domain of the High Court; and infringement of the right of consideration could only be suggested if different yardsticks or different norms were provided and applied qua the similarly circumstanced persons. However, this is not the case of the appellant nor it could be so because the High Court has apparently taken up all the persons in the zone of consideration at the relevant time and has accorded promotion on the basis of comparative merit of the candidates. The appellant, when could not stand in such competitive merit position, cannot raise a complaint about infringement of any of her legal rights. It is not the case of the appellant that anybody junior to her and standing equal in merit or anybody not fulfilling the criteria laid down by the High Court has been promoted"

In April 2009, the Delhi High Court passed a Resolution that required a candidate from DHJS to possess a minimum ACR (Annual Confidential Report) Grading of two 'A's ('Very Good') and 3 'B's ('Good') during the 5 years of consideration in order to be selected or promoted as District and Sessions Judge. In January 2010, this Resolution was modified and the requirement became a minimum of 5 'A's during the 5 years of consideration, which was equivalent to the revised promotion criteria in the Indian Administrative Services as well. Upon considering various representations apropos this revision, it was decided to implement the revised criteria in a phased manner over a period of 4 years, from 2009 to 2012.

Kohli, in her appeal, primarily contended that she had not been notified or made aware of the new criteria. The Court rejected this argument for carrying several shortcomings. It was noted that the she joined DHJS in 2002, secured 2nd rank in her batch, where entry level promotion is also decided on the basis of merit-cum-seniority or merit and it cannot be contented that a candidate could expect requirements for upward progression in the cadre to be less than that at entry level.

"It goes without saying that any upward progression in DHJS could only be on the higher requirements of merit and in any case, such requirements cannot be lesser than the requirements at entry level. In this view of the matter too, the appellant was conscious of the fact that for upward movement in DHJS, merit would acquire primacy; and that seniority alone was not going to be decisive for promotion to the higher posts."

"In the scheme of the rules and the requirements of the posts in question, the appellant cannot contend that she was not aware of the position that comparative merit of the incumbents shall be a crucial factor for any upward progression in the cadre."

It was further stated that the High Court had was undertaking the exercise of revising norms for the upward progression in DHJS since 2009 and had received and considered several representations before implementing the eventual Resolution in a phased manner. To this effect, the Court concluded thus-

"Viewed from any angle, it is but apparent that the appellant was aware of, and shall always be deemed to be conscious of, the requirement that any promotion to the post of District and Sessions Judge or Principal Judge, Family Court would only be on the basis of such norms where merit would be a crucial factor and seniority alone would not suffice."

The appellant had further claimed that the Delhi High Court had acted illegally and unfairly in putting the new criteria in operation with retrospective effect, which resulted in serious prejudice being caused to her. Taking note of the manner in which implementation was carried out, the Court not only rejected this submission but also appreciated the High Court for its approach.

"In the given fact situation and the methodology of gradual implementation adopted by the High Court, the suggestion on the part of the appellant that there had been any so-called retrospective operation of revised criteria remains totally bereft of substance and could only be rejected."

Dealing with the operation of the criteria, the Top Court took the view that "while raising grievances with regard to the impact and effect of ACR gradings, the appellant appears to have missed out the fundamental factor that for the promotions in question, an individual''s minimum merit, by itself, was not going to be decisive, but the relevant factor was going to be comparative merit of the persons in the zone of consideration".

It was also observed that the grading of an officer must remain between the individual officer and the establishment, and is not some information which another officer can claim as a matter of right.

Though the plea was dismissed, the Bench noted that Kohli was a hardworking officer who had not received any adverse comments in her career.