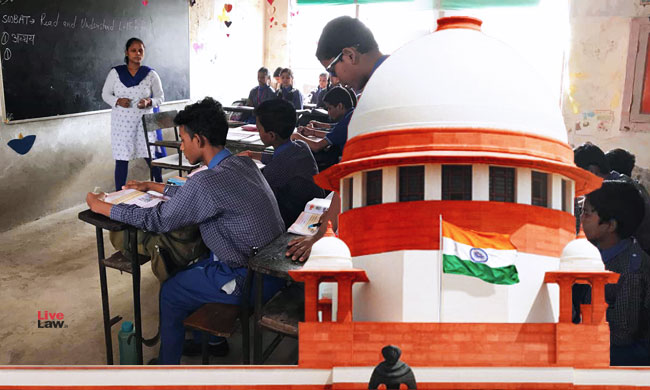 The Supreme Court on Friday rejected the challenge against the decision of Himachal Pradesh Government to regularize teachers who were appointed under under Primary Assistant Teachers (PAT) scheme, Para Teachers Policy and other schemes."we are of the view that when the appointees appointed under the scheme have completed more than almost 15 years of service now and also have acquired...

The Supreme Court on Friday rejected the challenge against the decision of Himachal Pradesh Government to regularize teachers who were appointed under under Primary Assistant Teachers (PAT) scheme, Para Teachers Policy and other schemes.

"we are of the view that when the appointees appointed under the scheme have completed more than almost 15 years of service now and also have acquired the professional qualifications, they cannot be denied regularisation at this point of time", observed a bench comprising Justices Mohan M Shantanagoudar and R Subash Reddy.

The bench noted that the schemes in question were notified in 2001 and 2003 under which appointments were made for PAT and teachers in other categories while petitions challenging the appointments were filed in 2012-13.

The Government explained that the PAT scheme was notified on August 27, 2003 to compulsorily enrol children in schools for elementary and primary education in the remote areas to achieve the goals as set by the government while enacting The Himachal Pradesh Compulsory Primary Education Act, 1997 for achieving 100 per cent enrolment.

Such policy was necessitated due to large number of vacant posts which have arisen year after year and which could not be filled since the State Selection Subordinate Board, Hamirpur which was responsible for the selection of teachers had come under a cloud and the selection process had come to a halt, the Government submitted.

These appointments were challenged in 2012-13 by petitioners who sought for filling up of vacancies of Junior Basic Training (JBT) Teachers as per Recruitment and Promotion Rules. The petitioners contended that the appointments under the impugned schemes were "backdoor appointments", and that the regularization of such appointments would be contrary to SC precedents such as Umadevi case.

While a single bench of the HC allowed the petition, and directed the state not to regularize those teachers, the division bench reversed those directions. Therefore, the petitioners came in appeal before the SC.

At the outset, the SC noted that the challenge was highly belated, as the writ petitions were filed in 2012 against the appointments made in 2001 and 2003. None of the affected teachers were impleaded in the petition too, the court noted.

The top court said it is difficult to disbelieve the submission of state in absence of any counter affidavit that in view of the hard topography, tribal areas, large number of vacancies, single-teacher schools and to achieve the object of the Act, such steps of appointments of teachers were taken. It noted that as per the regular Recruitment Rules the requisite qualification for the post of Junior Basic Training (JBT) teacher during the relevant time was 10+2 with 50 per cent marks and JBT certificate. The bench further said that as per the materials placed on record, it is clear all the persons who were recruited as Para Teachers under the 2003 policy were fully qualified as per the Recruitment and Promotion Rules.

"As the appointments were made as per the schemes notified by the Government such appointments cannot be treated as illegal, if at all they can be considered irregular, it said.

It is in view of the requirement of the State, their services were extended from time to time and now all the appointees have completed more than 15 years of service. For majority of the appointed teachers under the various schemes benefit was already extended and some leftover candidates were denied on account of interim orders passed by this Court, it said.

The bench also rejected the submission of petitioners that such scheme for appointments and regularization were formulated by the state to make back-door entries and said that all the appointed candidates are working for the meagre salaries pursuant to schemes notified by the government.

"In such view of the matter, taking the totality of peculiar circumstances of these cases, we are of the that the view expressed by this Court in the judgments relied on cannot be applied to the facts of the case on hand. All the appointed candidates are working for the meagre salaries pursuant to schemes notified by the Government. Except the vague submission that such schemes were framed only to make back door entries, there is no material placed on record to buttress such submission", the Court said.