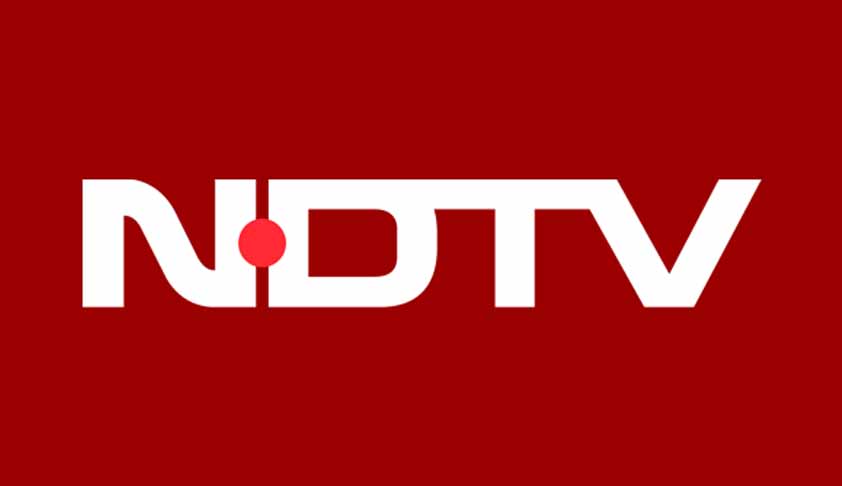 Supreme Court on Wednesday reserved Judgement on a Petition filed by New Delhi Television (NDTV) against the Delhi High Court Judgement dismissing the challenge against the notice proposing reassessment proceedings initiated by the Commissioner of Income Tax (under Section 147/148 of the Income Tax Act, 1961and the order of provisional attachment of Petitioner's assets under Section 281B of...

Supreme Court on Wednesday reserved Judgement on a Petition filed by New Delhi Television (NDTV) against the Delhi High Court Judgement dismissing the challenge against the notice proposing reassessment proceedings initiated by the Commissioner of Income Tax (under Section 147/148 of the Income Tax Act, 1961and the order of provisional attachment of Petitioner's assets under Section 281B of the Act

"...The DRP (Dispute Resolution Panel) is of the considered opinion that the facts of the case fits for making addition u/s. 68 of the IT Act as unexplained cash credit. Even addition u/s. 69A as proposed by the AO is also justified, as after lifting the corporate veil, the assessee (NDTV India) is found owner/controller of the money under reference", advocate Zoheb Hossain, for the respondents, indicated the conclusions of the DRP.

The issue before the DRP was that the NDTV India has brought an amount of Rs. 642 crores being unexplained money in to its books through its subsidiary NDTV Networks BV Netherlands.

Mr. Hossain spoke of the failure on the part of the assessee to disclose fully and truly all material facts necessary for the assessment, as under the first proviso of section 147 of the Income Tax Act- "Exemption under the Companies Act yes not also do away with the obligation under the IT Act to disclose the Financial Statement...by notice issued under Sections 143(2)/142(1), NDTV was required to furnish all statutory reports as per the Income Tax Act, copies of which could not be filed with return of income. However, in response to this notice, it furnished only 'standalone' financial statements of NDTV and did not furnish copies of financial statements including Balance Sheet, Profit and Loss account, Report of Board of Directors, report of its auditors of each subsidiary..."

With regard to the claim that 100 million US Dollars were raised by its UK subsidiary NDTV Networks (NNPLC) through Step Up Coupon Bonds during the Financial Year 2007-08, the corporate guarantee given by NDTV for the same and the fee charged, it was submitted that the requisite details in this behalf were found only in the agreement with the placing agent, and not in that with the investors and hence, it "cannot be termed as a subscription agreement".

In respect of the original assessment order and the subsequent change in opinion, Mr. Hossain advanced, "it was said that it can be seen from the facts of the case that the assessee provided the guaranteed and charged a fee for it...it was assumed that the loan is genuine...there was no opinion expressed as to the genuineness of the loan transaction..."

"In the context of Section 147 of the Act it implies that the Assessing Officer should have formed an opinion at the first instance, i.e., in the proceedings under Section 143(3) and now by initiation of the reassessment proceeding, the Assessing Officer proposes or wants to take a different view...When at the first instance, in the original assessment proceedings, no opinion is formed, principle of ―change of opinion cannot and does not apply. There is a difference between change of opinion and failure or omission of the Assessing Officer to form an opinion on a subject matter, entry, claim, deduction", he quoted from a 2012 Delhi High Court judgment.

Then, he relied on the findings of the Delhi High Court in its decision of August, 2017, from which the present SLP arose- "In the present case, the Revenue relies on the assessment proceedings for the AY 2009-10, the DRP directions as well as the tax evasion petition received by the AO to form the belief that the transaction of raising of funds through the Step Up Coupon Bonds by NNPLC was a bogus transaction...the Step Up Coupon Bonds were issued at a higher price, and yet were prematurely redeemed leading to a loss for the investors. In this regard, the AO has provided specific details regarding the new or tangible information that was received subsequent to the assessment proceedings for the year 2008-09...In the present case, NDTV has alleged that the details of the corporate guarantee issued by NDTV to NNPLC regarding the Step Up Coupon Bonds was intimated to the Revenue during the original assessment proceeding. This argument of NDTV falls flat in light of the judicial decisions mentioned above considering that the AO has reason to believe that this transaction is bogus. For these reasons, this Court is of the view that the impugned reassessment notice is valid in law and can be sustained"

Finally, Mr. Hossain urged that a Tax Evasion Petition is sufficient to justify the re-opening of the assessment- "in assessment proceedings, 143 notice is sent. A reopening notice need not be so exhaustive, all facts needn't come in there...even if otherwise the second proviso (to section 147) can be attracted, it is fine"

In his turn, Senior Advocate Arvind Datar made the case for NDTV- "the second proviso has no application here. A Debenture is not an asset but a liability. Investment in shares is an asset...even if it is assuming to be an asset, the coupon does not create any income charge to tax in India (he discussed the Vodafone controversy as to when income from a foreign asset is chargeable to tax in India)...there is no income escaping assessment here. Otherwise, why was the notice (to reopen the assessment) issued only on 31.3.2015? There was a conscious decision to invoke only the first proviso!..."

"I don't hear them say that qua these bonds, these are the material facts you didn't disclose. The Solicitor General said that no particulars about foreign subsidiaries were given. But ITR 6 'Scheduled Foreign Assets' came only in 2012. In 2008-09, there was no contemplation of disclosure of foreign assets! ('But we had demanded that', intervened SG Tushar Mehta)...", continued Mr. Datar.

"There is no provision in the Companies Act that the assessment has to be of the group companies. So all the financial statements are not required. If I am not submitting the statements of the subsidiaries, I must refer the permission for dispensation...At no point of time were the particulars of NNPLC or the Dutch company sought. They are just trying to justify the reassessment...in the assessment order also, there is no mention of any non-cooperation. There is no allegation of non-furnishing of information against NDTV at any point. And now there are 58 cases against NDTV!", he pressed.

"These 50 cases were filed in 2012! The DRP had reached its finding regarding the sham transactions in 2013! My friend is answering very tacitly", interjected the SG. When Mr. Datar said that he doesn't wish to "get into all this", the SG commented, "get into it fully, not half-heartedly". "We are no taking note of this argument", the bench assured the SG.

"It is false that 100 million dollars came from Cayman Islands. they came in dollars and went in dollars! They came through the banking channels and went through the banking channels, even though the subscriptions are in Mauritius...these debentures of 100 million were used for business purposes, it is not as of they were kept in Fixed Deposits!", continued Mr. Datar.

"NDTV Lifestyle, Imagine, they are all existing companies. They were all channels! They didn't succeed, that is a different matter...NNPLC was also not a one-box company used as a conduit for anything. It was a functioning company!", he insisted.

"Nobody said they are paper companies...though they are, but we never said it", quipped the SG.

"I borrowed 100 million, I repaid 72.4 and the rest was my gain. The loan was repaid to the Bank of New York. If the loan was a sham, there was no question of any repayment!", persisted Mr. Datar.

"The Functional Economic Analysis of 24.1.2014 is clear. Even in the DRP order, after consideration of all allegations of sham, NNPLC's assessment is accepted and the loan is found to be genuinely repaid. And then comes the assessment order of 31.3.2015...a repaid loan cannot be said to be the income of the holding company so many years later!", he argued.

"The order is vague. It only says that the funds you raised were shifted to a company in Mauritius and then taken to Mumbai. And all this is based on the complaint of a minority shareholder! No details of any of this was given! The assessee must be given notice of the case he is expected to meet! In the entire DRP order, the word 'Mauritius' is not mentioned!", he contended.

Finally, the DRP proceedings were discussed- "'Sham' is qua the 642 crores transaction, while 12 crores were towards the corporate guarantee. These two were considered separately!...Given the credit rating of the subsidiary (NNPLC), nobody would have subscribed (to the bonds)! It was agreed that the loan is genuine and could have been issued to your subsidiary only if you stood as guarantor!"