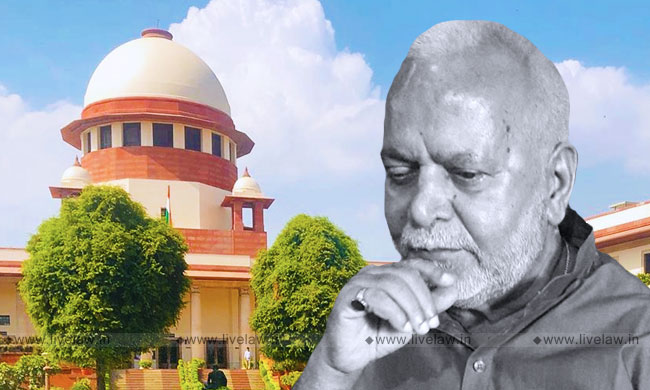 The Supreme Court on Thursday set aside the Allahabad High Court order which had allowed former Union Minister and BJP leader Chinmayand to seek a certified copy of the statement of the victim recovered under Section 164 of the Code of Criminal Procedure. A Bench headed by Justice UU Lalit dictated the Order and stated that the appeal filed by the law student was...

The Supreme Court on Thursday set aside the Allahabad High Court order which had allowed former Union Minister and BJP leader Chinmayand to seek a certified copy of the statement of the victim recovered under Section 164 of the Code of Criminal Procedure.

A Bench headed by Justice UU Lalit dictated the Order and stated that the appeal filed by the law student was allowed, thereby overruling the November 7 order of the Allahabad High Court which had allowed Chinmayanand's application seeking a certified copy of the statement of the victim recovered under Section 164 of the Code of Criminal Procedure.

The Bench further reaffirmed the guidelines laid down in the 2014 case of State of Karnataka v. Shivanna wherein it had been held that,

On 16th November, 2019, the Bench of Justices UU Lalit and Vineet Saran had issued notice in the plea and granted stay on the operation of the impugned order, till final disposal of the Special Leave Petition.

The Petitioner had contended that the Allahabad HC's direction, granting copy of the victim's statement before filing of the charge sheet was contrary to law and may have far reaching effects.

"The view taken by the High Court would be having far reaching effect not only in the Petitioner's case but in all cases of sexual offences against the women, where direction for supply of copy of statement of victim u/s 164 CrPC even during investigation would unreasonably put the accused to an advantageous position to and would cause irreversible damage to the investigation and case of the prosecutrix. It is therefore, very necessary for this Hon'ble Court to interfere and add a caveat in the High Court's order that the statement of the victim recorded u/s Section 164 CrPC cannot be given to the accused till charge-sheet is filed and cognizance has been taken by the court concerned."

A pre-condition for obtaining the copy of statement of the victim under Section 164 CrPC, is that the charge-sheet has been filed and cognizance has been taken by the Magistrate. Sections 207 and 208 of CrPC, which contemplate supply of copy of police report, statements and documents and other documents to the accused, envisage the same.

The Petitioner had further submitted that the High Court's reliance on the judgment rendered in Raju v. State of U.P. & Ors., 2012 LawSuit (All) 723, was flawed inasmuch as the same was a reference to an approach that was adopted prior to the amendment of CrPC in 1973 and that the criminal jurisprudence had seen a overhaul since then.

As per the petition, Chinamayanand had not made the law student a Respondent in his Application filed before the Allahabad HC. The order was passed by the HC on the basis of 'concession' by the Government Pleader that the statement can be given to the Chinmayanand.

"Thus the Criminal Misc. Application was allowed in a fast track mode, just in two days, that too unopposed", stated the SLP.

According to the petition, the student had made a detailed complaint to the SIT in September. However, FIR was not registered on her complaint, forcing her to approach the High Court's Monitoring Bench in this regard.

"At this stage when FIR is yet to be registered on the complaint of the petitioner, supply of statement of the prosecutrix to the accused would cause irreversible damage to her case and the causer of fair investigation"

The SIT, headed by Naveen Arora, Inspector General of Grievances, was constituted by the Supreme Court to investigate into the rape allegations, under the monitoring of the Allahabad High Court.

On September 21, 2019, Chinmayanand was arrested by the SIT and sent to jail. The student was also booked on alleged charges of extortion against Chinmayanand. She was however granted bail by the High Court on December 4, 2019.

On February 3, 2020, an Order was passed by Justice Rahul Chaturvedi, granting bail to the former Union Minister and BJP leader. Unusual observations were made in the bail order to the effect that the sexual intercourse was consensual and that both the parties were "using each other".

On February 20, 2020, the Supreme Court agreed to list urgently a plea challenging the Allahabad HC's order granting bail to the accused.

On April 30, 2020, the Allahabad HC had rejected the law student's application imputing bias on part of the SIT that had investigated her rape case as well as the extortion case filed against her.