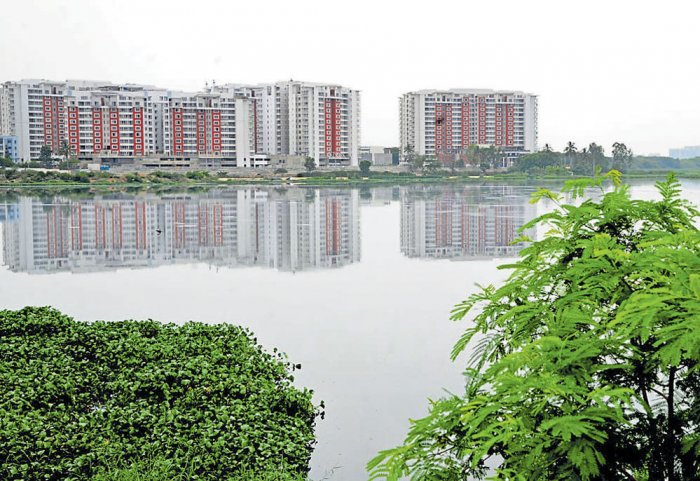 x
The builders Mantri Tech Zone and Coremind Software Zone have to demolish encroachments made in waterbodies and pay penalty of Rs 117.5 crore and Rs 13.5 crore respectively.

Allowing the appeals filed by State of Karnataka, the Supreme Court yesterday set aside the National Green Tribunal's order enlarging the buffer zone limits around lakes and water bodies in Bengaluru.

However, the bench of Justice A K Sikri, Abdul Nazeer and M R Shah dismissed the appeals filed by Mantri Tech Zone and Coremind Software Zone against the directions issued by the Tribunal to remove encroachments in water bodies and pay penalties.

This was set by NGT expanding the buffer zones under the Revised Master Plan(RMP) of Bengaluru, which was 30 meters in the case of lakes, and 50 meters from primary, 25 meters from secondary and 15 meters from tertiary Rajkulewas. These general directions were issued by the Tribunal in original applications filed by the NGO Forward Foundation against the encroachments made by the said two builders.

The state government was aggrieved with the general directions of the NGT issued in a case against two specific builders.

Sajan Poovayya, senior counsel who appeared for the NGO, submitted that there was no objection in setting aside the directions to the extent it is applicable to parties other than Mantri Tech Zone and Coremind Software Zone. Based on this submission, the bench held :

It may be noted that this modification was not made accepting the legal argument by the Karnataka government that the Tribunal directions were against were against the revised master plan of Bengaluru 2015, which had got a statutory character, and also the Karnataka Industrial Area Development Act, Planning Act, Karnataka Municipal Corporations Act, 1976, as per which the buffer zone was already fixed as 30 metre.Because, this argument was specifically rejected as against the said two builders.

The companies Mantri Tech Zone and Coremind Software Services were imposed a fine of Rs 117.5 crore and Rs 13.5 crore respectively by the Tribunal. They were also directed to demolish structures and vacate the encroached portion in the Bellandur catchment area. Mantri Tech Zone was directed to rebuild the Rajakulave that was diverted to make way for the construction.

The bench did not accept the companies' contention that they were bound only by the specifications in the RMP and the local laws. The SC held that Section 33 of the NGT gave it overriding powers over other laws. The judgment authored by Justice Abdul Nazeer held :

"Section 33 of the Act provides an overriding effect to the provisions of the Act over anything inconsistent contained in any other law or in any instrument having effect by virtue of law other than this Act. This gives the Tribunal overriding powers over anything inconsistent contained in the KIAD Act, Planning Act, Karnataka Municipal Corporations Act, 1976 ("KMC Act"); and the Revised Master Plan of Bengaluru, 2015 ("RMP").

A Central legislation enacted under Entry 13 of List I Schedule VII of the Constitution of India will have the overriding effect over State legislations. The corollary is that the Tribunal while providing for restoration of environment in an area, can specify buffer zones around specific lakes & water bodies in contradiction with zoning regulations under these tatutes or the RMP"

The bench also dismissed the builders' contention that the applications were time barred for not approaching the Tribunal within 6 months after Environmental Clearance(EC) was granted for the constructions. It held that the application was not to be treated as one filed challenging the EC under Section 14 of the NGT Act; but as one for relief, restitution and compensation under Section 15 of the Act, for which the limitation period is five years.

"It is clear from the documentary evidence supported by data, that the project proponents have committed breaches and the implementation of the project is bound to have serious adverse impact on the ecology, hydrology and the environment in the catchment area of Bellandur Lake. The environmental degradation as established from the documents would give rise to an independent cause of action.

Therefore, this was a petition under Section 15 of the Act and thus it could be filed within 5 years from the date on which the cause for such compensation or relief first arose."

The apex court found that the findings arrived at by the Tribunal are not only based on the documents that were available on record but also on the pleadings that were made by the parties buttressed by the report of the Committee of Experts constituted by it..

The judgment went on to add that "wherever the environment and ecology are being compromised and jeopardized, the Tribunal can apply Section 20 for taking restorative measures in the interest of the environment". NGT Act being a beneficial legislation, the power bestowed upon the Tribunal would not be read narrowly.

"Therefore, the directions passed and the penalty imposed by the Tribunal on both project proponents are valid and sustainable and do not suffer from any perversity", concluded the Court.