Donors Have Right To Secrecy, Voters Have No Right To Know About It: AG Submits, SC To Pronounce Order Tomorrow On Electoral Bonds 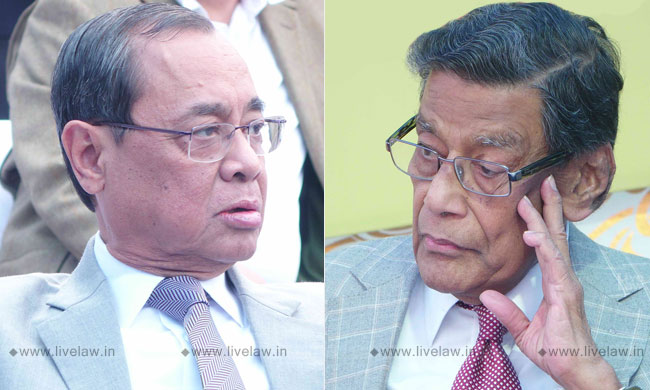 x
"This is a matter where Your Lordships may not interfere and let it play out till the elections and then the new government and the economists will review and Your Lordships will get the report..."AG requested.

The Centre on Thursday faced some tough queries from the Supreme Court over its Electoral Bonds Scheme. Attorney General K. K. Venugopal had yesterday sought to defend the Electoral Bonds as a means of donations to political parties, advancing that they serve in eradicating black money from political funding, and to prevent the donors from being victimized. "Why do you want to keep...

The Centre on Thursday faced some tough queries from the Supreme Court over its Electoral Bonds Scheme.

Attorney General K. K. Venugopal had yesterday sought to defend the Electoral Bonds as a means of donations to political parties, advancing that they serve in eradicating black money from political funding, and to prevent the donors from being victimized.

"Why do you want to keep the identity (of the purchaser of the bonds) a secret?", asked Chief Justice Ranjan Gogoi.

"All industrialists have to knock on the doors of the government from time to time for licenses, exemptions etc. If it is known that they gave 50 crores or 100 crores to one party, they would be targeted by the rival parties", replied the AG.

Addressing Senior Advocate Rakesh Dwivedi who was representing the Election Commission, the Chief Justice asked if the Commission could produce the figures in the light of the AG's contention that affluent donors have so far been compelled to make contributions in cash because of which a large amount of unaccounted money is introduced in the economy.

"They distribute bottles of liquor, biryani etc at rallies. Every single method of wooing the voters is employed, mostly legal means but some even illegal...that is the way of life...The biggest fraud is perpetrated in the returns filed for election expenses! What is 20-30 crores for each constituency as is revealed to the ECI under 77 (section 77 of the RPA, 1951)?", submitted the AG.

"In 1971, there was Purushothama Reddiar's case where the Supreme Court found that a lot of money (much over the prescribed limit of Rs. 2,000) had been incurred over the shamiyana, speakers, etc and the Pondicherry Assembly election was set aside. This is a reality! Black money is being generated deliberately as kickbacks. We have seen investigations going on- as to whom I have given a contract for a building or a bridge, I could say increase the price by 10% and give me the 10% as funding!"

"If the government seeks to stem the flow of black money, are they justified? Will the court sit (to review) it? At the end of the elections, Your Lordships will know if black money has gone down and has the payment to political parties by cheque or EBs increased? If previously only 50 crores were disclosed by a national party as election expenditure, now upto 500 crores are being shown. We were at 94 in Transparency International's corruption list and have now come to 78! The experiment needs the support of the court! My friend (Advocate Prashant Bhushan for the petitioner) has very cleverly said that the court may direct disclosure if not stay the EB, which is as good as stopping the scheme! This is a matter where Your Lordships may not interfere and let it play out till the elections and then the new government and the economists will review and Your Lordships will get the report...", urged the AG.

"Nobody knows that 95% of the EBs are going to the ruling party (as alleged by Mr. Bhushan)! Is he saying that other parties are receiving and spending only cash? For campaigning, rallies, road shows etc, others are also spending the same money. They are also using helicopters and wooing crowds! Where is this money coming from? From rightful sources or black money? Historically, it has only been black money!"

"Your Lordships have seen how elections are fought. Whatever one party says or does, the other says no! There is no question of the minds of political parties coming together to say this is in the interest of the country. This is a matter for Your Lordships to wait and see what happens...", he pleaded.

"When the bank is issuing the EB, there is a format for application. Once it is issued, it has a (serial) number. Is the identity of the purchaser available to the bank?", inquired Chief Justice Gogoi.

"Yes, as all purchasers fill up the KYC. And then a random ten-digit number is allotted and all the documentation as to each purchaser is placed in in the vault in a sealed cover at the end of the day. At the end of the month, it is sent to a central repository in Bombay. When the political parties receive the bonds, they can see the number in UV light", replied the AG.

"When the bank issues an EB on the application of 'X', 'Y' or 'Z', does the bank know which bond is issued to 'X' and which to 'Y'? Kindly sit down and reflect. It has wider ramifications on Income Tax law if the identity of the purchaser of the bond, who has donated 100s of crores of rupees, is not known. Then your entire exercise against black money is useless", observed the Chief Justice.

The AG asserted that it a bank-to-bank transaction and white money alone that can be transferred.

The CJ pressed about contributions by shell companies, in view of the amendment to Section 182 of the Companies Act taking away the restriction that donations can be made only to the extent of 7.5% of net average profit of three preceding financial years. The ECI had warned that this would encourage the creation of shell companies for the sole purpose of making donations, with no other business consequence of having disbursable profits.

When the AG insisted that even shell companies would have to pay in white, the CJ remarked, "So black is converted into white? We don't know where the shell company gets money from"

"The SBI has an account of money received through banking channels. It is a proof of the purchaser and if he would be evading tax, it would be known...", the AG sought to submit.

"This is not how black money works. There are a series of companies through which the money passes- it is deposited under some and passes through a chain of transactions and then is finally transferred. And the argument taken is that you can't go to the source. KYC is not a certification as to the genuineness of the transaction", weighed in Justice Sanjiv Khanna.

"Forget the EBs. Shell companies do convert black money into white and use it for legitimate purposes. Now they will be giving their identity the moment they make a transfer on account of the KYC. Even if the EB didn't exist, black money would be there, as would be the conversion of black into white. Now they are subjected to a stricter regime requiring them to submit money to SBI", argued the AG.

"And the bank has the particulars of which bond has been redeemed by which party? The issuing bank of SBI knows who are the people who have applied for an EB and of how much, but which bond has gone to whom is not known?", confirmed the CJ, with the AG replying in the affirmative.

As Justice Khanna pointed out that even in the Annual Information Return, this information about the purchaser is not given to the Income Tax Department, the AG replied that the court or even the IT department can demand these details about any assessee.

"Are you better or worse than the bank?", posed the CJI to Mr. Dwivedi.

"I know how much of bonds have been issued to which party though not the names of the donors. Which party has encashed how many bonds is known to me", he responded.

When the CJ asked the source of the information, Mr. Dwivedi indicated section 29C of the RPA.

"But there is a proviso inserted by the Finance Act (of 2017 exempting from disclosure political contributions by way of EBs)! The parties may have given the information but where is the obligation? If the political party says our annual audited report will not contain this information, then what will be your stand? Obviously you are worse off than the bank! You know nothing!", noted the CJ.

"The political parties can only put their money (from the EB) in a designated bank account. They can't have any other money in that account. As far as the ECI is concerned, it can ask how much money is there in this designated bank account as per the encashment scheme...Whether you get the information from the SBI issuing bank or from the bank account of the assessee, it doesn't matter. Whether shell company or not, the money paid and the purpose for which it is paid will be shown. So why go to the SBI where everything is in sealed covers?", the AG advanced.

When Justice Khanna asked if the KYC details will have the name of the person and the account, the AG said, "Yes". "Suppose the fact is disclosed that one has purchased a 50-crore bond, the other parties which are not receiving it will know that this money is not paid to me...", he added.

"Transparency cannot be applied without appreciating the problem faced by the legislature, which believed this to be the best way of solving it. The voter has the right to know what? They already know every single aspect about the candidate! Why are they concerned about the source of money of the political party? Puttuswamy speaks of right to privacy in every respect", pleaded Mr. Venugopal.

"Is Black money the single-largest bane facing the country? Is it the Greatest violation of democracy? Is it the Antithesis of democratic election? Will Your Lordships balance the right of the electorate to know against encouraging more black money?...It is the government which has to decide finally and Your Lordships would want to wait and watch. Transparency for what purpose? Are you going to kill the scheme? Or is it a well-thought out scheme to insulate against black money?...This is not about converting black into white. Nothing even today stops the parties from using the black money...It is a step forward. Who has donated what is not the voter's concern!...Transparency cannot be used as a mantra and we must look at the problems facing the country. Many parties will come and go in the next hundred years, but it will be a permanent achievement to do away with black money", he continued vehemently.

When the AG sought to place reliance on a few Indian and foreign judgments in that behalf, Chief Justice Gogoi himself led him to the portions speaking of giving the government an opportunity to experiment and tiding along to the result- "We have heard what you are trying to tell us", remarked an amused Chief Justice.

"Your Lordships seem to feel that whatever you think of the economic and social laws should be the law of the country and the elected members are not wise enough...This is the best scheme possible for the vice of black money in elections, and I earnestly request you to uphold it...", the AG rested his case.

The decision on whether or not the EB Scheme is stayed or, in the alternative, the anonymity that it imbibes is done away with will be pronounced at 10:30 AM on Friday.