'Second FIR Not Barred Merely Because Motive In Both Offences Are The Same'; SC Upholds Life Sentence Of Saravana Bhavan Founder For Murder [Read Judgment] 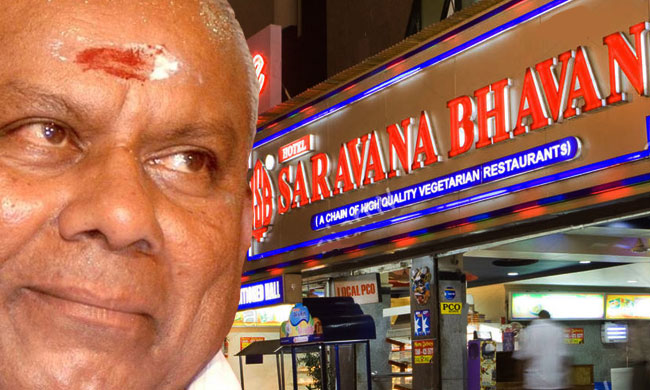 The Supreme Court yesterday upheld the life sentence awarded to P Rajagopal - the founder of famous South Indian restaurant chain Saravana Bhavan - and five of his aides for murder of Santhakumar in 2001.The bench of Justices N V Ramana, Mohan M Shantanagoudar and Indira Banerjee dismissed the batch of appeals filed by accused against the 2009 judgment of Madras High Court. The trial...

The Supreme Court yesterday upheld the life sentence awarded to P Rajagopal - the founder of famous South Indian restaurant chain Saravana Bhavan - and five of his aides for murder of Santhakumar in 2001.

The bench of Justices N V Ramana, Mohan M Shantanagoudar and Indira Banerjee dismissed the batch of appeals filed by accused against the 2009 judgment of Madras High Court. The trial court had sentenced Rajagopal to ten years imprisonment under Section 304, Part I IPC (culpable homicide not amounting to murder) in 2004, which was enhanced to life imprisonment under Section 302 IPC(murder) by Madras HC.

The crime was committed with the motive of Rajagopal to take Jeevajothi, the wife of deceased Santhakumar, as his third wife.

"Either upon the advice of an astrologer or having become besotted with PW1(Jeevajothi), Accused No.1(Rajagopal) had evinced a keen desire to take PW1   as   his   third   wife,   though   she   was   already   married   to Santhakumar (the deceased)", observed the Court in that regard.

In order to fulfill this desire, Rajagopal tried to get close to Jeevajothi, who was the daughter of a staff employed in Saravana Bhavan, by offering her financial help and gifts.  Gradually, he started interfering in her personal life,and persuaded her to break away from the relationship with Santhakumar. When she did not yield, Rajagopal resorted to more devious means.

On October 1, 2001, Santhakumar and Jeevajothi were abducted by Rajagopal and his henchmen, and were let off after threats. Eighteen days later, they were again abducted. Jeevajothi was taken to a village, where she was forced to undergo rituals, which were performed with the intention of making her leave Santhakumar.  Santhakumar, who was separately taken away, was supposed to have been killed by a hired goon Daniel. However, Daniel had a change of mind, and spared Santhakumar's life and told him to escape to Mumbai. Daniel told a false story to Rajagopal that Santhakumar had been killed.

But Santhakumar, instead of escaping to Mumbai, came back to Jeevajothi.  Enraged on knowing this, Rajagopal and his aides abducted them again on October 24, 2001, and  Santhakumar and Jeevajothi were taken away to different locations in separate vehicles.  Weeks later, a dead body was found at Tiger Chola in Kodaikanal, which was identified as that of Santhakumar's.

In relation to the first incident of abduction, Jeevajothi had lodged a complaint before police, upon which an FIR was registered on October 12, 2001. After tracing the dead body of Santhakumar, another FIR for murder was registered on November 20, 2001.

In the appeal before Supreme Court, one of the main points raised by the counsel for accused was that the second FIR was illegal, as there was already an FIR registered for a crime in the same transaction. It was argued that  the second alleged offence was a continuation of the first alleged offence, and separate FIR could not have been registered. Therefore, the investigation and trial on the basis of illegal FIR are wholly vitiated, argued the appellants.

But the SC rejected this argument on the finding that both offences were separate transactions.

"Evidently,   the   time   and   place   of   occurrence   of   the   two incidents are different. Even the number of accused involved in the incidents is different. No continuity of action can be gathered from the sequence of events either", observed the bench.

It further held that mere commonality of motive will not make the offences part of same transaction.

"It may be noted that the motive for commission of both the offences may be the same, inasmuch as they were committed to enable Accused No. 1 to marry PW1, but merely because of their common motive, the second offence cannot be said to be in continuation of the first incident, in light of there being distinct intentions behind the two offences".

The first offence was committed with the intention of threatening and pressurizing Santhakumar. The intention behind the second offence was to permanently get rid of him, noted the bench.

"Therefore, it is evident that unity of purpose and design between the two offences is also absent. Thus, it is amply clear that the incident of murder is entirely separate and distinct from the earlier incident of abduction", observed the judgment authored by Justice Shantanagoudar. Reference was made to the decision in  T.T. Antony v. State of Kerala, (2001) 6 SCC 181 in this regard.

The Court also rejected the argument that police should have carried out further investigation in relation to murder in the first FIR of abduction, instead of registering a separate FIR.

"In case a fresh offence is committed during the course of the  earlier  investigation,   which  is  distinct  from  the  offence  being investigated,  such  fresh  offence  cannot   be  investigated  as  part  of the pending case, and should instead be investigated afresh", ruled the bench, relying on Awadesh Kumar Jha v. State of Bihar, (2016) 3 SCC 8.

First FIR can be used as corroborative evidence

The bench also rejected the argument of appellants that first FIR could not have been used as an evidence in the murder trial. The Court noted that the first FIR was not used as a substantive piece of evidence, but as a corroborative piece to show motive of the crime.

The case was resting entirely on circumstantial evidence. The  prosecution  mainly   relied  upon  three  circumstances  to  prove the guilt of the accused -  motive, the last seen circumstance and the recovery of the dead body at the instance of one of the accused Daniel, a mercenary hired by Rajagopal.

The SC bench independently evaluated the evidence to "satisfy its conscience" and held that the incriminating circumstances were well established. The consistent testimonies of Jeevajothi and her family members established the motive of the crime. Their testimonies also revealed that the deceased was seen last in the company of the accused. The dead body was recovered based on the confession by one of the accused. Also, the personal belongings of the victim such as gold chain, wallet etc. were recovered from the accused persons.

The dead body was found to have been identified by Jeevajothi based on his clothes and a scar on his body. Superimposition test was also done to identify the body. The appellants' argument that body could not have been identified without DNA test was not accepted by the bench. Though the court acknowledged that DNA test would have been the best course, it said that there were other pieces of evidence which established the identity. It also endorsed the superimposition test, saying that it was quite often used in police investigation such as Nithari murders, Russian tourist murder in Goa in 2008 and Paharganj bomb blast cases.

The Court termed the testimonies of prosecution witnesses 'overwhelming, steadfast, cogent,  homogeneous, consistent and reliable'. It noted that the accused had not offered any explanation to rebut the strong evidence placed against them.

The discrepancies in their testimonies pointed out by the appellants were ignored as 'minor' by the bench.

"It is worth recalling  that   while   it   is  necessary  that   proof   beyond  reasonable doubt should be adduced in all criminal cases, it is not necessary that   such   proof   should   be   perfect,   and   someone   who   is   guilty cannot get away with impunity only because the truth may develop some   infirmity   when   projected   through   human   processes", said the bench in that regard.

"In  our considered opinion, the prosecution has proved the complicity of all the   appellants   in   murdering   Santhakumar   by   strangulating   him and thereafter throwing the dead body at Tiger­Chola", concluded the bench.

Rajagopal, who was earlier released on bail by SC on medical grounds, has been given time till July 7 to serve sentence.