Will CJI's Office Comes Under the Ambit of the RTI Act? SC Constitution Bench Reserves Judgment 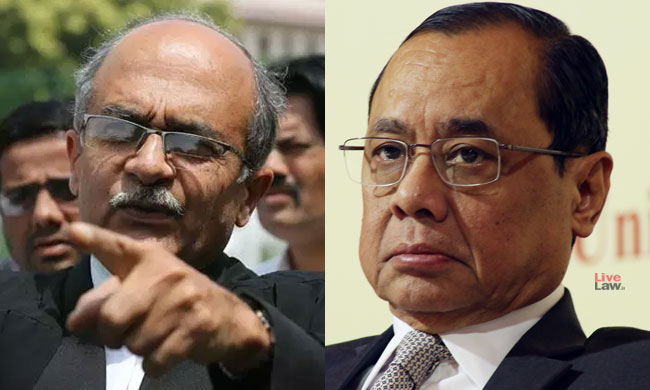 The proposition of disclosure of the correspondences between the highest functionaries in the judiciary and the government regarding the super-session of relatively senior judges and the rejection of advocates for elevation witnessed an intriguing exchange between the Supreme Court five-judge bench and lawyer Prashant Bhushan on Thursday.

"Of late, we are experiencing good people, who have opted to become judges, withdrawing their consent. On interaction, the reason appears to be the possibility of the negative observations, whether rightly or wrongly, being brought into the public domain. In such a case, not only does he not become a judge, but his reputation, his professional life, his family life are all adversely affected", reflected Chief Justice Ranjan Gogoi, however, clarifying that it is nobody's case that there is a claim of privilege under section 123 of the Evidence Act over such correspondences between the Law Minister, the state government and the Collegium.

Regarding the forty-year old S. P. Gupta judgment (relying on which the disclosure of the said communications was directed by the CIC in 2009), the Chief Justice observed, "Old is gold! We know the value of gold! (Laughter)...but S. P. Gupta was a in a different regime (Mr. Bhushan conceded that the government had control over the appointments then). Even without the RTI Act, some principles are being followed. Do you know that we are even interacting with the prospective candidates now? We are spending 10-15 minutes with each candidate! Do you know from how many sources we get inputs and from how many sources we re-verify the inputs?"

"Nobody is for a system of opaqueness. Nobody wants to remain in the state of darkness or keep anybody in the state of darkness. The question is drawing a line. In the name of transparency, you can't destroy the institution...there was a case where a District Judge of Madras was being considered for the High Court. Ultimately, he was not deemed fit and the reasons were set out. The result was that then he didn't even get an extension of two years which everybody gets as a matter of rule because he was not found fit to be a High Court judge. All his colleagues who were not even in the zone of consideration for the High Court got the extension, but not only did he not become a High Court judge, he retired at 58!", continued Chief Justice Gogoi.

In response to the explanation afforded by Mr. Bhushan for the aforesaid incident, the Chief Justice asserted, "Let us not assume any judge has an animus against anybody, let alone the Chief Justice. Otherwise, the institution will dissolve. We are not prepared to accept (the assumption) because it is not right! We have some procedures. Even with the change of the individual, the decisions don't change!"

Mr. Bhushan proceeded to cite the example of a lawyer of a High Court whose name was reiterated by the High Court Collegium two times until it was finally recalled on being returned by the government for the third time-

"Are the people of this country not entitled to know the reason that prevailed with the Collegium and the government?", he asked

"This is an extreme example that you have given. And there you are very right. So where do we draw the line? A second time reiteration is not the procedure but it has happened! This is a case where the reasons should be made public", agreed the Chief Justice, adding to Mr. Bhushan in a lighter vein,

"For the class of documents pertaining to the selection process, Are you making a nuanced argument that everything need not be disclosed? That only somethings need to be made public having regard to the nature of the information? Because Not everything in the Selection process has a public interest...some of it is information personal to an individual", weighed in Justice D. Y. Chandrachud.

"Suppose a proposed appointee is a homosexual and the government objects to the recommendation on that ground. And that is overridden by the collegium which then makes a reiteration. Here, the correspondence may be disclosed but not the detail as to his personal sexual orientation. The question is will public interest override (the protected interest)? Suppose his appointment is denied on this ground. Then public interest would outweigh (the purported harm by the disclosure) and it has to be disclosed! Because the denial is on a ground which people would consider irrelevant. Similar would be the case where an appointee is rejected for being a Christian or a Muslim...", explained the Counsel.

As the Chief Justice concurred that there cannot be a blanket embargo on disclosure and that it has to be examined on a case-to-case basis, Justice Deepak Gupta pointed out that if the appointee himself does not want a disclosure as to his sexuality, a line would have to be drawn as otherwise it would be "very dangerous".

Agreeing, the Chief Justice also noted that the best test would be to ask the person himself if he wants the reasons to be placed in public.

"If I hold a public office, then there is public interest in declaring my assets. There is an interest in knowing. But while the name is being considered for appointment, the candidate must necessarily accept that there will be a scrutiny? That is where balancing comes in...", reflected Justice Chandrachud.

"Suppose an objection is taken to the appointment on the ground that he is medically unfit and yet he is appointed to the post that needs a level of medical fitness. Now a RTI application seeks disclosure of the correspondence. The medical affairs may as such be personal information but that is relevant for the purpose of him holding a public office", replied Mr. Bhushan.

Agreeing, Mr. Bhushan advanced that he is in fact placing two qualifications to any disclosure- the information which are exempted under any of the sub-clauses of section 8(1) of the RTI Act, particularly information deemed personal under (j); and secondly, the option of severing the record and disclosing only a part of the information, as envisaged in section 10 of the Act.

In as much as AG K. K. Venugopal had argued on Wednesday that a disclosure of the communications in question would hamper the candour and frankness of the Collegium members in freely indicating the reasons for a rejection, the Chief Justice drew the court's attention to an observation in S. P. Gupta that holders of high constitutional offices such as the Chief Justice of a High Court and the Chief Justice of India are not made of such weak stuff that they would hesitate to express their views if they apprehend subsequent disclosure- "The Attorney had some observations on this", quipped the Chief Justice, much to the amusement of the court.

The judge proceeded to remark, "Our experiences for the last fifty years have demonstrated that the functioning in the other jurisdictions are not the same as here. It is all wishful thinking. Look at the ground realities of which you are more aware than us! Every decision is tainted and painted in a brush that it should not...there might be other perspectives but there is a need to develop trust. Somewhere you have to trust something"

Further, the AG had yesterday regarded the opinion of the seven judges in S. P. Gupta as "idealistic", in as much as they, according to him, had not contemplated the impact of a full disclosure on the independence of the judiciary. As Mr. Bhushan put forth that if the judgment was to be overruled, a nine-judge bench would be needed.

"When the three judges in 2016, in a bench presided by me, had referred the matter to a five-judge bench, how did Mr. bhushan react? As if the court is shirking its responsibility. You had vehemently opposed the reference. And you were right because it took us three years to come with this combination", remarked Chief Justice Gogoi on a humorous note.

When Mr. Bhushan said that he had opposed the reference because there was no ground to overrule S. P. Gupta, the Chief Justice noted, "Nothing needs to be overruled. (The issue is) how do we fine-tune our experience of fifty years.

It is a question of trust- how far you can go. S. P. Gupta established the ideals of Transparency in the functioning and of openness in public life. But at the same time, some balancing is needed...like (Justice Chandrachud) pointed out yesterday that even in some of the exemption clauses (in section 8(1) of the RTI Act), some balancing is there (allowing for disclosure if the public interest so warrants). And finally, there is 8(2) (allowing a disclosure even under the Official Secrets Act or under any of the exempted heads in section 8(1) if the public interest outweighs the protected interest)"

"You read some of our recent Collegium resolutions and see the departures. See How things have been balanced...", the Chief Justice suggested to Mr. Bhushan.

Continuing, Chief Justice Gogoi elaborated, "There was a district judge who was appointed as a High Court judge. After two years, he was not given an extension and was reverted back. He challenged this decision. We called for the collegium records and showed it to him, and just by seeing the reasoning of the Collegium, he didn't want to pursue his petition before us any more. Now Imagine if those reasons were disclosed, then what would have happened? There can't be blanket ban, yes. But it has to be seen on a case-to-case basis"