[Sec 24 Land Acquisition] Proceedings Will Lapse Only When There Is No Possession 'And' No Payment; 'Or' To Be Read As 'And' : Centre Tells SC 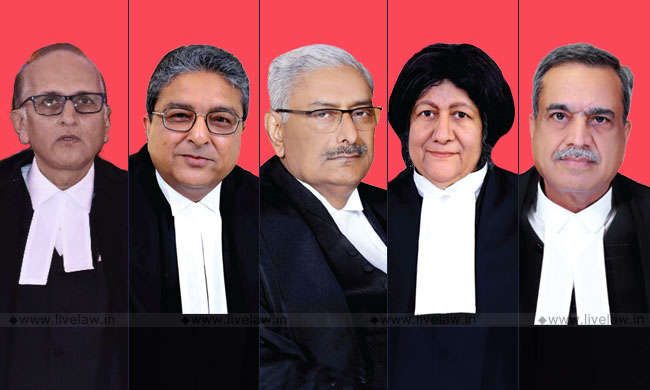 A Constitution Bench of the Supreme Court of India, comprising of Justices Arun Mishra, Indira Banerjee, Vineet Saran, M.R. Shah, and S. Ravindra Bhat on Tuesday continued the hearing on the second day on the matters relating to the interpretation of Section 24 of Right to Fair Compensation and Transparency in Land Acquisition, Rehabilitation and Resettlement Act, 2013"Sub-section (2)...

A Constitution Bench of the Supreme Court of India, comprising of Justices Arun Mishra, Indira Banerjee, Vineet Saran, M.R. Shah, and S. Ravindra Bhat on Tuesday continued the hearing on the second day on the matters relating to the interpretation of Section 24 of Right to Fair Compensation and Transparency in Land Acquisition, Rehabilitation and Resettlement Act, 2013

"Sub-section (2) (of section 24 of the new land Acquisition Act) carves out an exception to to (1)(b). Starting with a non-obstante clause, it says that even if the award is made, in these two contingencies (the physical possession of the land has not been taken or the compensation has not been paid), there will be complete lapsing", began Solicitor general Tushar Mehta on Tuesday, requesting the bench to read the "or" in section 24(2) as "and".

He pointed out that the sub-section ends with a colon, seeking to submit that section 24(2) is the general principle and the Proviso is the exception- "Colons are used to introduce a list, or to enlarge the previous statement, or to separate the title from the sub-title...the legislature has put the Proviso after (2), while (1)(b) ends with a full-stop. If we are to bodily lift the Proviso to place it after (1)(b), then (2) would end with a colon which could not have been envisaged by the Legislature..."

"In the old British era, the text would go to the Parliament without any punctuation, which would be added by the proof-reader later. It was not considered important for interpretation. But the position has now changed, for both the US and the UK. In India also, what is tabled is the printed Bill with punctuation"

"This kind of bodily-lifting would not be interpretation but, in fact, legislation, which this court may not do...the Proviso after (2) indicates that it is a transitional provision, only to save maximum of what has happened in the past, and not a permanent provision...the Proviso is not to (1)(b) as there is no reference there for deposit...", he insisted.

"So the purpose of reading the Proviso with (2) is to avoid lapsing? Suppose there are 100 landowners, 20 of which lie in between the land. If the acquisition lapses for one chunk of the land and not for one, the project would not be completed...", Justice M. R. Shah wanted to clarify.

"The proviso seems to be at par with section 28A of the old Act. It is an independent proviso for compensation where there is no lapsing", added the judge.

"Suppose a big hospital has to be built. And out of 100, 20 say that they have not been paid. So all 100 would be entitled to a higher compensation", said the SG.

"If some are 'paid' and for some, 'deposit' has been made, then? Sub section(2) speaks of them collectively...", ventured Justice Ravindra Bhat.

"Deposit in the accounts of the beneficiaries is akin to being paid. How would it be paid otherwise?", observed Justice Shah.

"If 2 are paid and 2 are not paid. And there is no deposit in the accounts of the beneficiaries. Then?", asked Justice Arun Mishra. "Then 24(2) would apply and not the proviso", replied the SG.

"Say, the possession has been taken, but payment is not made and the compensation is deposited. If we read 'or' as 'or', the acquisition would lapse automatically. It would be repugnant to the proviso. If we read it as 'and', only then the proviso make sense. The proviso has to be read harmoniously with (2)...(1)(b) comes into play of the award is passed within the period mentioned in (2), otherwise there will be repugnancy", said Justice Mishra.

"The parliament has warned that if the award is older than 5 years and no possession has been taken, it will lapse. The proviso presupposes the existence of proceedings which will happen only in (1)(b)", added Justice Bhat.

"Suppose physical possession is taken, but the proviso comes into play. In case compensation is not deposited for want of money, then there will be higher compensation for all. Now, say, possession is not taken and payment is made, but there is no deposit. Would it lapse? No. only then does the Proviso make sense", elaborated Justice Mishra.

"Can there be a conscious classification between people depending on the government's ability to take possession? You are saying they would be deprived of higher compensation because they come under (1)(b). If the award is made but they are no paid, why should they lose out?", was Justice Bhat's view.

"Even if payment has been made to minority and possession is not taken, it would not lapse. there would just be higher compensation for all...consequence of non-payment is lapsing, that of non-deposit is higher compensation...once you have tendered and made the deposit, you have discharged the liability...what does 'paid' and 'deposited' [in sub-section (2) and the proviso respectively] mean? When (2) says 'paid', why does the proviso also not? Also, is this 'paid' and 'deposited' the same as that in 31(1) (of the old Act)?", wondered Justice Mishra.

"11 (of the 1894 Act) has no statutory impact by making the award. There is no change in ownership or title of the land, the purpose is only to ascertain the area of the land, the compensation payable and the apportionment. It has finality only qua the Collector and the landowner. It is only a benchmark for 24...(Taking of possession) under 16 (of the Old Act) is how there is statutory vesting in the government free from all encumbrances. And 16 is dependent on making of award under 11 and the collector taking possession, not on the compensation being paid. After the making of the award and the taking of the possession, the land vests in the government. Then even the government cannot divest itself of the acquired land!", stressed Mr. Mehta.

"Say, the award is made and the possession is taken, but for years the compensation is not paid and the acquiring body loses the capacity to pay. There can't be any acquisition without compensation. And this is not a one-of-its kind situation. there have been umpteen cases like this", interjected Justice Indira Banerjee.

"There cannot be a vacuum in the law as to this situation where the capacity to pay has been lost", agreed Justice Bhat.

"But can a transitory provision say even vesting would lapse?", argued the SG.

"Then what is lapsing? Possession is taken but compensation is not paid. It fits 24(2). But you are saying there is no lapse. Either 24(2) or the Proviso must apply", Justice Bhat wanted to know.

"The concept of lapsing is a warning from the Legislature that you have divested the owner of the land, used your Eminent Domain, but have not paid. can it be applied only to the narrow case where neither possession has been taken not compensation has been paid?", inquired Justice Bhat.

"Wiping out of statutory vesting by non-payment or delayed payment was not contemplated even by the repealed Act. So it cannot be done by a transitory provision. This anomaly can be tackled only if 'or' is read as 'and'- no possession and no compensation! Prior to the coming into force of the 2013 Act, there may be cases where possession was taken but compensation was not paid or paid late. In such a case, there was only the right to claim interest, not divesting. Can what was not allowed under the old Act be done under 24?", contended the SG.

"Retrospective provisions are to be tailored and construed very narrowly. There is a difference between lapsing and the limited applicability of the Act as under 24(1)(b). The vested rights of parties have to be protected...", he continued.

Indicating section 6 of the General Clauses Act and section 114 of the 2013 Land Acquisition Act, he advanced that the repeal shall not revive anything not in force or existing at the time at which the repeal takes effect.

"Unless an intention to the contrary appears", pointed out Justice Bannerjee.

"If that was the intention, the Legislature would not say lapsing, but that the government would stand divested. 24 can't be used as a second cause of action to come to the court after 20 years and say that the possession has not been taken or the possession was wrongly taken and hence, the acquisition has lapsed", countered the SG.

When Justice Bhat said that section 6 and 11A of the old Act spoke of lapsing, the SG asserted, "l1A (lapsing of the acquisition if award not made within prescribed period of publication of declaration that land is needed for public purpose) states what is obvious. That it is not mentioned in 24 cannot violate the principle that court's action prejudices noone"