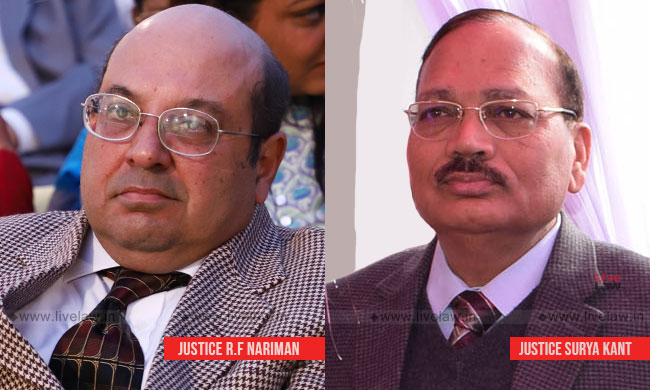 The Supreme Court has declared Section 3J of the National Highways Act 1956, to the extent it excludes solatium and interest as per Land Acquisition Act 1894 to acquisitions done under the NH Act to be unconstitutional.

"We, therefore, declare that the provisions of the Land Acquisition Act relating to solatium and interest contained in Section 23(1A) and (2) and interest payable in terms of section 28 proviso will apply to acquisitions made under the National Highways Act.

Consequently, the provision of Section 3J is, to this extent, violative of Article 14 of the Constitution of India and, therefore, declared to be unconstitutional", held the bench consisting of Justices Rohinton Nariman and Surya Kant  in the case titled Union of India & ors v. Tarsem Singh and ors.

The bench was hearing a bunch of appeals filed by the Union Government against the decisions of Punjab and Haryana High Court which added solatium and interest as per LA Act to the compensation awarded to land owners whose lands were acquired under the NH Act.

Senior Advocates Shyam Divan and Mukul Rohatgi, appearing for the Centre and National Highways Authority of India, argued that the NH Act had self-contained provisions dealing with procedure for acquisition and compensation to land owners. Section 3J of the Act excluded the application of LA Act. Therefore, the Court could not have ordered the grant of solatium at the rate of 30% as prescribed under the LA Act to the land owners.  The direction was given by the HC division bench even in the absence of appeal by the affected parties, argued the senior lawyers.

Senior Advocate Amit Sibal along with Advocate Neeraj Kumar Jain supported the grant of solatium by highlighting the discriminatory nature of the NH Act. They referred to the  Constitution Bench judgment in P. Vajravelu Mudaliar vs Special Deputy Collector for Land Acquisition (1965) 1 SCR 614 and Nagpur Improvement Trust vs Vithal Rao (1973) 1 SCC 500.

Solatium part and parcel of compensation

The bench discussed the concept of 'solatium', and said that it was granted to the landowner to compensate the compulsory nature of acquisition. Therefore, it was part and parcel of compensation.

"The solatium that is paid to a landowner is on account of the fact that a landowner, who may not be willing to part with his land, has now to do so, and that too at a value fixed legislatively and not through negotiation, by which, arguably, such land owner would get the best price for the property to be sold. Once this is understood in its correct perspective, it is clear that "solatium" is part and parcel of compensation that is payable for compulsory acquisition of land."

The Court noted that the NH Act originally had no provisions dealing with land acquisition. These provisions, from Sections 3A to 3J, were incorporated as per 1997 Amendment. This amendment was made with the objective of providing for 'speed acquisition' of land for NH projects. Exclusion of solatium from compensation has no nexus with this objective of the land.  Hence, this classification made between person whose lands were acquired for NH purposes and other purposes has no rational nexus with the object sought to be achieved by the 1997 amendment.

" First and foremost, it is important to note that, as has been seen hereinabove, the object of the 1997 Amendment was to speed up the process of acquiring lands for National Highways. This object has been achieved in the manner set out hereinabove. It will be noticed that the awarding of solatium and interest has nothing to do with achieving this object, as it is nobody's case that land acquisition for the purpose of national highways slows down as a result of award of solatium and interest. Thus, a classification made between different sets of landowners whose lands happen to be acquired for the purpose of National Highways and landowners whose lands are acquired for other public purposes has no rational relation to the object sought to be achieved by the Amendment Act, i.e. speedy acquisition of lands for the purpose of National Highways. On this ground alone, the  Amendment Act falls foul of Article 14."

From the point of view of the land owner, it is immaterial if the land is used for NH purpose or any other purpose as his concern is compensation.

"Out of two adjacent plots belonging to the same individual one may be acquired under the principal Act for a particular public purpose and one acquired under the Amending Act for another purpose, which, when looked at from the point of view of the landowner, would be discriminatory, having no rational relation to the object sought to be achieved, which is  compulsory acquisition of property for public purposes".

"In the facts of these cases, it is clear that from the point of view of the landowner it is immaterial that his land is acquired under the National Highways Act and not the Land  Acquisition Act, as solatium cannot be denied on account of this fact alone."

The Court also took note of the fact that the Central Government has issued notification under the new land acquisition act -  Right to Fair Compensation and Transparency in Land Acquisition, Rehabilitation and Resettlement Act 2013 - making solatium applicable to acquisitions done as per NH Act.

"The Central Government has considered it necessary to extend the benefits available to landowners generally under the 2013 Act to similarly placed landowners whose lands are acquired under the 13 enactments specified in the Fourth Schedule, the National Highways Act being one of the aforesaid enactments.

This being the case, it is clear that the Government has itself accepted that the principle of Nagpur Improvement Trust (supra) would apply to acquisitions which take place under the National Highways Act, and that solatium and interest would be payable under the 2013 Act to persons whose lands are acquired for the purpose of National Highways as they are similarly placed to those landowners whose lands have been acquired for other public purposes under the 2013 Act.