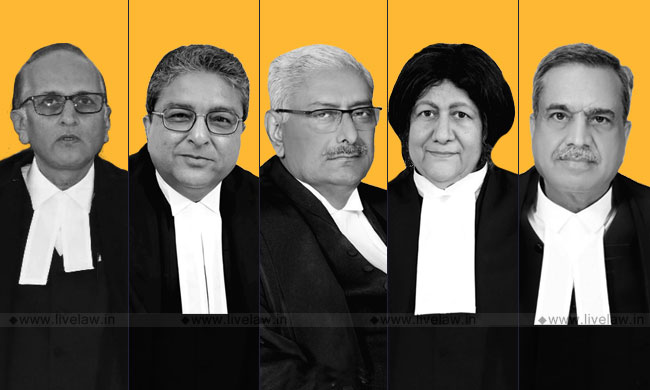 A Constitution Bench of the Supreme Court of India, comprising of Justices Arun Mishra, Indira Banerjee, Vineet Saran, M.R. Shah, and S. Ravindra Bhat has continued the hearing on the second day on the matters relating to the interpretation of Section 24 of Right to Fair Compensation and Transparency in Land Acquisition, Rehabilitation and Resettlement Act, 2013"Why have the two...

A Constitution Bench of the Supreme Court of India, comprising of Justices Arun Mishra, Indira Banerjee, Vineet Saran, M.R. Shah, and S. Ravindra Bhat has continued the hearing on the second day on the matters relating to the interpretation of Section 24 of Right to Fair Compensation and Transparency in Land Acquisition, Rehabilitation and Resettlement Act, 2013

"When it is said 'deposit', does it mean 'paid'? Then (the acquisition) would be saved under 24(2)...the 'deposit' contemplated in the Act is not the English term. 'Deposit' is either in the treasury or in the bank or in the court...'paid' is different, as is clear from the scheme of the Act. It is to the owner. 'Paid' does not include 'deposit'...", observed the bench.

"'Paid' and 'deposit' are synonymous under the old Act. If in 1983 you tendered the compensation and it was not accepted, what is the choice for you? To deposit it. If you don't deposit, your consequence is not lapsing, but interest under 34...", noted Justice Ravindra Bhat.

"If you are not tendering and make the deposit directly in court, would it be justified under the old Act? 'Deposit' is only to avoid the liability of interest...liability of the payment of compensation is fulfilled when you tender, when you have offered. An unconditional offer to make payment is necessary...", remarked Justice Mishra.

"If your tender is not accepted, you keep it in an ear-marked place. If you have not paid, does it mean you have not offered?...If the payment is in the treasury, the person has no notice of that payment. 31 is not complied", added Justice Bhat.

"There is a provision for notice- public and personal. In 31, people are before me, or have chosen not to be so. I have to tender compensation, show my willingness to pay. If it is accepted, it is payment. If the consent to receive is not there, then I make the deposit under 31(2), which is deemed payment", asserted Solicitor General Tushar Mehta.

"You are saying you are absolved by the deposit in the court under 31? That is not correct. There is an obligation on a public servant that the compensation for the land that a man is divested of is given to him. You are a buyer, even though it is a forced purchase", said Justice Mishra.

"You said keeping aside money would be tantamount to payment? 31 is tendered and actually paid", opined Justice Shah.

"I am gathering details and ascertaining the amount, having it ready, tendering it. If it is refused, then I deposit it...suppose a man has no interest in the land and is only there for the compensation? Then what?", asked the SG. "Then the collector has to deliver it in the court", pointed out Justice Shah.

"What if someone plays fraud on the real owner and claims to have title?", inquired Justice Bhat. "This is an extreme situation", said Mr. Mehta.

"34 says 'paid' or 'deposited'. 31 says 'tender' or 'deposit in court' and then there is no liability to pay. If you fail to deposit, even if you have made the tender, then because you are retaining the money with yourself, you have to pay interest...but does 'paid' mean 'deposit'? 'Payment' is not 'depositing'. Maybe in case of those people who are not found to be entitled, 'deposit' is called for...Are we giving the right to a person to correct their wrong? Can they take advantage of you if they say 'don't make payment to me' and you could not discharge your liability?...You can make the deposit in case of refusal, but that is not payment. You have only avoided interest", Justice Mishra commented.

"Suppose there is no clear title or the correct person could not be found, then you could not have paid. 'Payment' would then mean that you have offered and there will be the liability to deposit the amount under 31, the consequence of failure to comply with which would be interest. 'Payment' is only where you could have ascertained the person and have still not paid", the SG sought to advance.

"Suppose two of us are brothers. The land belongs to my father but the revenue records show me as the owner. I am tendered, I accept and I am paid. Tomorrow, if my brother files a suit saying that I have suppressed from the collector the fact of a will of my father of a 50-50 share in the land, will the acquisition lapse then because he is not paid?", he illustrated.

"No. Because the payment is already made. Once the payment has been made to whoever the Collector says has a better title, then the dispute is only between those two persons", replied Justice Shah.

"'Tender' means you have the money. And the failure to deposit it attracts interest. Where you have tendered and the person refuses, it is payment. If you don't deposit, it is not a case of non-payment, only the case of interest under 34 for retaining the money...31(1) says 'tender' and 'payment'. 31(2) speaks of the exigencies for deposit. For 31(1), payment is over as soon as you tender. 31(2) contemplates only deposit and not payment. 31(1) is discharge of obligation of payment, and 31(2) are the preventive clauses. In case of failure to fulfil either (1) or (2), 34 comes in", explained Justice Mishra.

"Suppose I acquire two adjoining lands and make the tender. One accepts and I make the payment under 31(1). The other refuses so I make the deposit under 31(2). When 24 applies, the acquisition in case of the former would not lapse, but for the latter, it would. That is why 'payment' in 24(2) includes 'payment' in whichever mode is contemplated. Otherwise, it would give rise to an anomalous situation. If I tender and it is accepted, then it is payment. If it is refused and I make the deposit, even then it is payment", argued the SG.