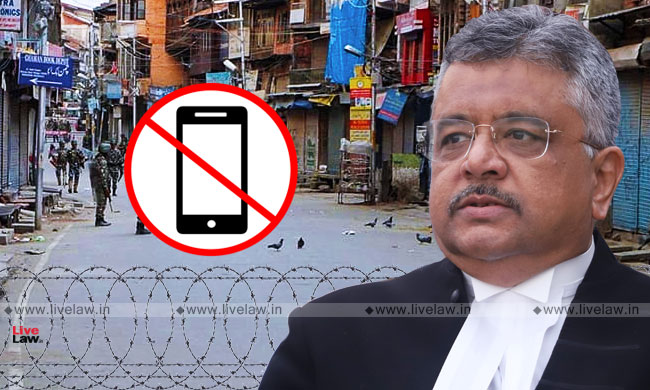 The three judge bench of Supreme Court comprising Justices NV Ramana, Subhash Reddy and BR Gavai resumed hearing petitions regarding the communication lockdown in Jammu & Kashmir since August 5, 2019, with Solicitor General Tushar Mehta explaining the need to impose restrictions through Section 144 of CrPC in the State. "If some people are creating trouble, why can't they...

The three judge bench of Supreme Court comprising Justices NV Ramana, Subhash Reddy and BR Gavai resumed hearing petitions regarding the communication lockdown in Jammu & Kashmir since August 5, 2019, with Solicitor General Tushar Mehta explaining the need to impose restrictions through Section 144 of CrPC in the State.

"If some people are creating trouble, why can't they be prevented?...Segregating those people from those who needed to be protected was difficult, so a general order in such a situation was warranted", he said. Referring to the Babulal Parate judgment, he responded to the petitioners' assertion that despite nothing happening, restrictions were imposed by submitting that the actions were necessary and justified to prevent crime and breach of peace in the region.

"This is a preventive measure, not a remedy, in order to protect human life and security, and to ensure that the law and order situation doesn't deteriorate", he stated.

Referring to the case of State of Karnataka Vs Dr Praveen Togadia, the Solicitor General submitted that prohibitory orders were needed as few people may incite the public through inflammatory speeches and other actions. The apex court had reversed Karnataka High Court's decision to interfere with the order of Sec 144 in larger public interest in that case, he informed to submit that the provision empowers authorities to pass orders in urgent cases. He asserted that the government was aware of the situation and acted accordingly since "we are fighting enemies from across the border."

Admitting that political leaders have the freedom of speech and expression, he then took the court through a number of speeches, statements and tweets of political leaders from J&K. Quoting various statements made by PDP's Mehbooba Mufti, National Conference's Farooq Abdullah, Congress's Ghulam Nabi Azad from the time when there was speculation over the abrogation of Art. 370/35A, it was stated that such statements would stir sentiments and incite people. This justified the internet ban, submitted Mehta while clarifying that the internet was never banned everywhere in J&K.

On July 28, Mehbooba Mufti @MehboobaMufti said "we want to tell the central govt tinkering with article 35A will result in the whole body being burnt. We cannot forget sacrifices of our martyrs. PDP will stand for special status of Kashmir. Hands, body will be burnt"

Mufti @MehboobaMufti
"All leaders and workers should unite against removal of 35A. NC, PDP or INC - we need to keep our differences aside and sacrifice life & property to protect J&K special status."

SG says these are some of the many things posted on social media, which stir sentiments and incite people, which justifies govt banning internet. Clarifies that internet was never banned everywhere in j&k#Kashmir

"Newspaper is also a form of communication, it is one sided communication…Landline is one to one…Social media however is uncontrolled…I can convey a message to someone and it will multiply…The use of hashtags ensure multiplication by tens of thousands", explained Mehta. He further added that Pakistan has said that they will provide internet to keep the issue burning.

Upon being questioned about hashtags, ASG Vikramjit Banerjee attempted to explain what it is to the bench and the SG quoted certain handles which used provocative hashtags.

Justice Ramana then asked whether access could be granted to few selective sites and Mehta said, "it cant be segregated…Either we can grant full access or not…Cannot separate sites".

He also informed the bench that internet restrictions have already been lifted at many places and that many software companies in Srinagar had been given access. The Solicitor continued to quote some more inciting statements from certain alleged Pakistani handles.

So these form the basis of imposing restrictions?, asked J Reddy. Yes, responded the SG.

In light of this situation, any magistrate who did not take this decision (impose restrictions under S.144) would have been in dereliction of duty as non-state actors as well as politicians have tried to create an issue for all these years. "These were exceptional situations. Measures were needed." He further insisted that least restrictive measures were imposed as individual movement was never restricted but only public congregation wasn't allowed.

Moving on, Justice Ramana asked about media restrictions and whether they had been given any special permission. Yes, responded Mehta, since August 7, and stated that there was internet in the media convention center. The SG then reiterated his submission that social media is a tool for wide communication of hate and terror. The connection is instant, with minimum effort, message of terror can be spread far and wide, he added while citing articles on modern terrorism. By morphing images, certain events and developments from Pakistan occupied Kashmir are portrayed to be taking place in the Kashmir valley, which is dangerous. He went on to talk about dark webs which operate in encrypted form that is untraceable and that blocking the internet is justified to prevent such terror acts on dark web.

Dark webs operate in encrypted form which is untraceable. Blocking internet is justified to prevent such terror acts on dark web

Issues of national security not amenable to judicial review

Moving on to the issue of the extent to which judicial review is possible when national security is involved, Mehta submitted that national security is not a matter of law, but of policy which is left to the executive. He added that it is not easy to define what constitutes national security but culture, economy and integrity of the border is included. Using precedents to buttress his point, Mehta argued that it is for the executive to take a call with decisions when they are in exclusive possession of material related to national security. The court must look at the evidence in such situations, and once it's established that national security is involved, the court should not interfere and accept the executive's decision. He referred to cases of the UK and observations from the House of Lords to urge that the scope of review in such cases is limited. "Not saying your Lordships cannot look into the case, we are bound to inform you of the situation", he added.

Mehta then addressed arguments that had been made orally by the Petitioners, but were not in the pleadings and said he had filed a 2 page affidavit on the same.

On the issue of S.144 orders being signed by the IG, who was not the appropriate authority to do so, Mehta submitted that the principal secretary had reviewed it, as per rules, making the orders were legal.

In response to the petitioners' reference to the decision of the Hong Kong HC which overturned face mask ban, Mehta submitted that Hong Kong did not face cross border terrorism, and that ban was with respect to strikes and protest.

In conclusion, the SG assured that there were minimal restrictions and that the situation in Kashmir is normal. "I can place videos from yesterday, week before and week before to show how courts are functioning, markets, railway station, etc are all normal...A majority of the people there are happy."