"Is There A Change In The Stand Of Devaswom Board? Asks Indu Malhotra,J; "We Decide To Respect The Judgment": Board 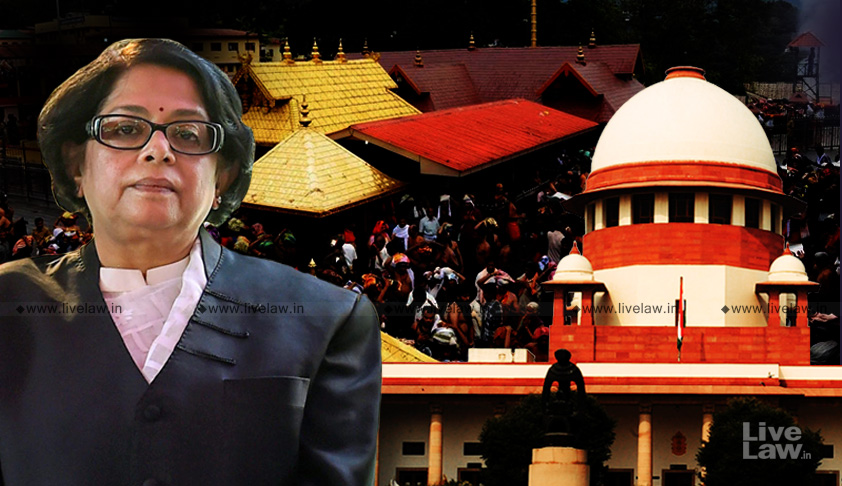 "Is there a change in the stand of the Devaswom Board? Earlier, you had argued otherwise?", Justice Indu Malhotra sought to confirm from Senior Advocate Rakesh Dwivedi. "Yes. Now the Board has taken the decision to respect the judgment and not seek a review. We have also filed an application in this behalf", replied Mr. Dwivedi. The query came as the Senior Counsel urged the...

"Is there a change in the stand of the Devaswom Board? Earlier, you had argued otherwise?", Justice Indu Malhotra sought to confirm from Senior Advocate Rakesh Dwivedi.

"Yes. Now the Board has taken the decision to respect the judgment and not seek a review. We have also filed an application in this behalf", replied Mr. Dwivedi.

The query came as the Senior Counsel urged the review petitioners to "accept the change in the society that the judgment wishes to bring about", in stark contrast to the Board's position in the original proceedings. At that time, the Travancore Devaswom Board had backed the entry restriction with a view to uphold the 'Naishtika Brahmachari' character of the deity.

"It is high time that masculinity rises above and recognizes the purity of the biological attributes of females without which the existence of mankind cannot be imagined", submitted Mr. Dwivedi.

"On Article 25(1), there is complete unanimity- it says 'all persons are equally entitled'. A religious practice has to be consistent with this dominant theme", he continued.

Relying on the impugned judgment, he contended that none of the ancient texts or scriptures produced before the apex court qualified the restriction as an essential religious practice.

In context of Rule 3(b) of the Kerala Hindu Places of Worship (Authorisation of Entry) Rules being declared ultra vires, he submitted, "it was argued that the Ayyappa devotees constitute a separate denomination and hence, they have the benefit of the Proviso to section 3 (of the parent Act of 1965). But they were held to not be a religious denomination in the constitutional sense"

"The time today globally is of inclusion. We have to transform the constitutional jurisprudence, transform the society, and include women in all walks of life. Nobody can point out a biological attribute or anything else to exclude women from any sphere of life, even if it is a public temple. Our constitution-makers have emphasised on equality; The mandate to the State is to equalise. The intent is embodied in Articles 14 and 15, and then also in 25(1) which speaks of "all persons". The Act of the state of kerala is an express attempt to equalise women in this respect...", he rested his case, adding that none of the review petitioners have a case.

Amidst opposition from Mr. Dwivedi, Senior Counsel Abhishek Manu Singhvi had advanced arguments on behalf of Prayar Gopala Kishnan, the former chairman of the Devaswom Board. Although Dr. Singhvi had represented the Board in the original matter, he assured that there is no conflict of interests.

"The 'naishtika Brahmachari' nature of the deity has not been noted except by Justice Chandrachud in one paragraph, even though in passing. The dissenting judge has, however, dealt with it. There is a direct nexus between the intrinsic identity and status of the deity and the so-called exclusion. Unless it is so linked, it cannot be protected. The deity's great powers are derived from his ascetic endeavour, the abstention from sexual activity...The exclusion is neither of men or women or a caste, but only of a narrow class which is in antipathy and antithesis of the character of the deity...Your Lordships have not dealt with it, the inherent physiological characteristics of a class which has nexus with the character of the deity...there are hundreds of Ayyappan temples but this character is unique to this Temple. Everything else falls into place once the exclusion is linked with the character, everything is intelligible then. There would be no question of 15 or 17 then...", he elaborated.

He placed reliance on the Venkataramana Devaruand case where the Court had observed that Gods are worshiped in India not generally, but in particular manifestations- "The conduct of worship, where to stand and worship, and who are entitled to worship were all recognized as 'matters of religion'"

Next, Dr. Singhvi insisted that untouchability for the purpose of Article 17 has to be read as caste-based or religion-based exclusion- "There is no exclusion of women or men or of a class of men or women based on religion or caste. The Civil Rights Act (of 1955) will have to be read harmoniously with Articles 25 and 26. If 17 is out of the way and I have protection under 25 and 26, then Civil Rights Act cannot come in the way..."

He referred to the 2015 Madurai Meenakshi Temple case where a bench headed by Justice Ranjan Gogoi (as he was then) had noted that Article 17 is limited to exclusions based on caste or religion. "Of course, it is a Division Bench judgment so Your Lordships may choose to overlook it", he added.

"How does it gel with the morality of the visitors to the Ayyappa temple? Any number of beliefs will not gel with constitutional morality. That is the essence of religion...It is not a science museum but a temple!"

Finally, Dr. Singhvi attacked the assumption that there must be universality of a practice across the hindu religion for it to be an essential practice- "Hinduism, unlike the more recent religions, is a highly diverse religious system. India is the most diverse country in the world and within India, Hinduism is the most diverse. Universality may not be the right test..."