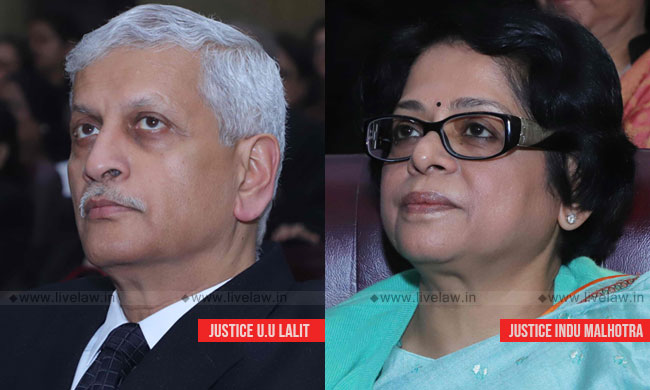 The Supreme Court has held that the rule under Mitakshara law that whenever a male ancestor inherits any property from any of his paternal ancestors upto three degrees above him, then his male legal heirs upto three degrees below him would get an equal right as coparceners in that property will apply in cases of succession which opened before Hindu Succession Act 1956.Applying this...

The Supreme Court has held that the rule under Mitakshara law that whenever a male ancestor inherits any property from any of his paternal ancestors upto three degrees above him, then his male legal heirs upto three degrees below him would get an equal right as coparceners in that property will apply in cases of succession which opened before Hindu Succession Act 1956.

Applying this rule, the bench of Justices Justices U U Lalit and Indu Malhotra allowed an appeal filed by one Arshnoor Singh, to set aside the sale deeds executed by his father Dharam Singh in 1999. As per the impugned sale deeds, Dharam Singh alienated joint family property to the respondent Harpal Kaur, whom he subsequently married as second wife.

The sale deeds were challenged by Arshnoor Singh in a suit filed in  2004, after he attained majority in 2003. He claimed that the properties were coparcenary properties, which were alienated by Dharam Singh without any legal necessity and without receiving any consideration from the respondent.

The trial court decreed the suit. This was confirmed in appeal filed by the respondent.

However, the Punjab and Haryana High Court set aside the decree in second appeal, on the reasoning that the property ceased to be coparcenary property after Inder Singh effected partition in 1964. Therefore, Arshnoor Singh had no locus to challenge the sale deeds, the High Court held.

Challenging this, he came in appeal before the apex court.

The top court noted that the in the case, succession opened in 1951 at the time of death of Lal Singh, the great grand father of appellant. Since it was before the commencement of Hindu Succession Act, Mitakshara law applied to the succession. This meant that the property devolved from Lal Singh will retain the character of coparcenary property upto male descendants three degrees below him - Inder Singh, Dharam Singh and Arshnoor Singh.

"If succession opened under the old Hindu law, i.e. prior to the commencement of the Hindu Succession Act, 1956, the parties would be governed by Mitakshara law. The property inherited by a male Hindu from his paternal male ancestor shall be coparcenary property in his hands vis­à­vis his male descendants upto three degrees below him. The nature of property will remain as coparcenary property even after the commencement of the Hindu Succession Act, 1956", observed the judgment authored by Justice Indu Malhotra.

After the Hindu Succession Act, 1956 came into force, this position has undergone a change. Post – 1956, if a person inherits a self­-acquired property from his paternal ancestors, the said property becomes his self-acquired property, and does not remain coparcenary property(Section 8 of HSA).

The suit property which came to the share of late Dharam Singh through partition, remained coparcenary property qua his son Arshnoor Singh, who became a coparcener in the suit property on his birth in 1985, said the Court.

The respondent had placed reliance on the decision in Uttam v Saubhag Singh(2016) 4 SCC 68, which held that after partition, property will lose character of joint family property. But this was distinguished by SC on the ground that succession in that case had opened after 1956

The SC held that it was settled law that the power of a Karta to sell coparcenary property is subject to certain restrictions viz. the sale should be for legal necessity or for the benefit of the estate. The onus for establishing the existence of legal necessity is on the alienee.

It had come out in evidence that there was no monetary consideration for the sale deeds executed by Dharam Singh to Harpal Kaur.

Therefore, the appeals were allowed, restoring the decree of trial court.