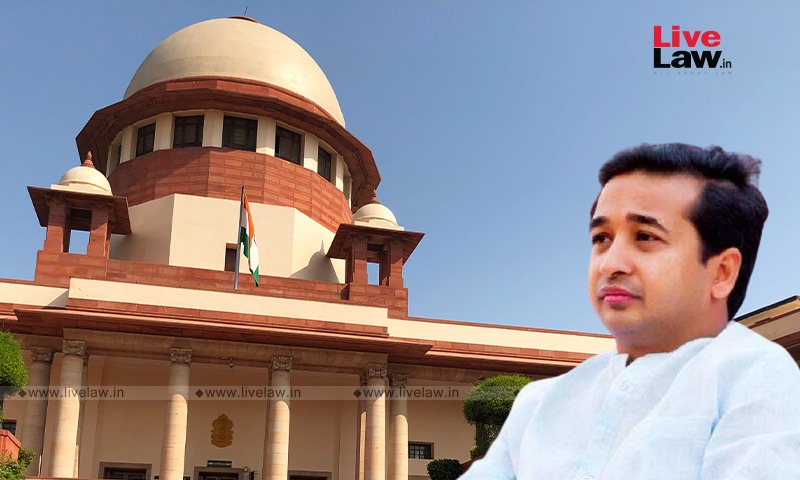 The Supreme Court on Thursday directed BJP MLA Nitesh Rane to surrender before the concerned Court and seek regular bail in connection with the attempt to murder case registered against him at Sindhudurg and protected him from arrest for 10 days.With the above direction, a bench comprising Chief Justice of India NV Ramana, Justice AS Bopanna and Justice Hima Kohli disposed of the special...

The Supreme Court on Thursday directed BJP MLA Nitesh Rane to surrender before the concerned Court and seek regular bail in connection with the attempt to murder case registered against him at Sindhudurg and protected him from arrest for 10 days.

With the above direction, a bench comprising Chief Justice of India NV Ramana, Justice AS Bopanna and Justice Hima Kohli disposed of the special leave petition filed by Rane, son of Union Minister Narayan Rane, challenging the  Bombay High Court's order refusing pre-arrest bail to him.

Rohatgi started his submissions by saying that it was a "cooked up case" out of "political vendetta".

"This is also a completely cooked up case on the eve of an election to District Cooperative Bank. I am a sitting MLA. The complainant is a person belonging to the opposite party. The allegation is that the complainant was stabbed by a paper cutter. A paper cutter! The said assailant said to himself that the incident must be informed to Rane! The assailant proclaims!"

Rohatgi added that the High Court rejected Rane bail by saying that he was facing 5 other criminal cases. But those are cases with respect to political agitations done for water supply, highway construction, fishermen's rights etc.

"The conspiracy is to kill this man with a paper cutter at 11 AM in public! And what is charged against me? Attempt to murder", Rohatgi submitted. He argued that the case was cooked up as a retaliation to the "cat-call" incident in the Assembly.

At this point, the CJI asked Rohatgi, "Why don't you surrender and go in for regular bail?"

CJI then turned to Dr Singhvi and asked, "Mr. Singhvi, you are appearing for the state? What is all this? Political virus?".

Singhvi started by saying that the case was not as simple as projected by Rohatgi.

"He hatches a conspiracy with A6 (Satpute). Satpute is his loyal associate. They meet in a vanity van and the photograph of the victim is shown in the petitioner's phone saying he is spreading rumours in Sindhudurg. Satpute takes the photo of the photo from Rane's phone", Singhvi said. He added that the phones and the Call Detail Records of the accused have been seized, which show their regular inter-communications ahead of the crime. He further said that the victim identified one of the accused in the Test Identification Parade. One accused is absconding.

Refuting Rohatgi's submission, Singhvi said that the crime occurred on December 18, whereas the cat-calling incident took place on December 23. Referring to the details of the investigation, Singhvi said that custodial interrogation was inevitable in the case. He added that the police has procured CCTV visuals of one accused buying screw driver and paper-cutter for the crime. These instruments can be used for inflicting fatal wounds, he added.

In rejoinder, Rohatgi argued that the victim had suffered only simple injuries and yet a case under Section 307 IPC for attempt to murder was invoked. The senior counsel said that a conspiracy would be hatched to inflict such simple injuries using a paper-cutter. Senior Advocate Siddharth Luthra added that the victim was seen roaming around freely a day after the injury. Luthra contended that there are no direct phone calls connecting Rane and the attacker.

"Are we sitting in trial?", the CJI asked at this juncture.

In the end, the bench disposed of the matter by directing Rane to seek regular bail from the concerned Court after surrendering before it and granted him 10 days protection.

Along with Rane, the High Court had also refused pre-arrest bail to his co-accused Sandesh aka Gotya Swant. Accused Manish Dalvi was granted anticipatory bail.

The Kankavli Police booked Rane and others in December 2021, under sections 307, 120(B) read with 34 of the Indian Penal Code. Rane approached the High Court after a sessions court in Sindhudurg rejected his anticipatory bail application.

The case against Rane is based on a complaint filed by Santosh Parab (44). He alleged that while he was going on a bike from Naravde Naka in Kankavli, an Innova car without a number plate hit his motorcycle and dragged it over 50 feet. The assailant then allegedly threatened to get back at him for working with one Satish Sawant.

Parab said the man attempted to kill him and stabbed him in the chest. Moreover, he told the cops, he heard his attacker allegedly say that he(attacker) must inform Gotya Sawant and Nitesh Rane.

Before the High Court, it was argued on behalf of Nitesh Rane that the FIR was registered to prevent him from participating in the Sindhudurg District Co-operative Bank elections, which were to be held on December 30, 2021. Further the cat-calling incident outside Vidhan Bhavan from December 23, when Shiv Sena leaders had allegedly said that Rane would be taught a lesson was also cited.

The Special Public Prosecutor appearing for the police had vehemently opposed bail to Rane, calling him the "mastermind," who is now trying to influence witnesses. It was submitted that Rane's custody was required to establish the money trail by which assailants were hired for the assault.

It was argued that the case was not a result of the alleged cat-calling incident as the conspiracy was unearthed only after Sachin Satpute's arrest.