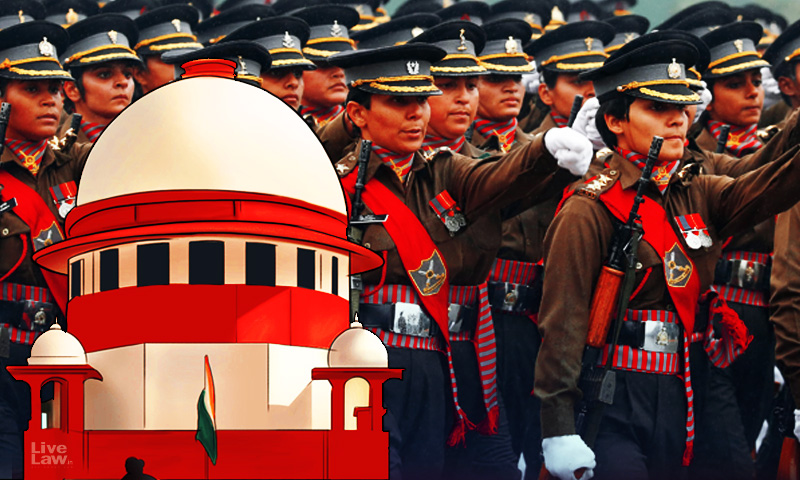 The Supreme Court on Wednesday heard an application contending that the Indian Army has "not granted Permanent Commission to even 50% of women officers", challenging the arbitrary criterion adopted by Centre to "deny benefit to deserving women candidates".The bench of Justices D. Y. Chandrachud, Indu Malhotra and Indira Banerjee adjourned the matter to December to allow time to the Centre to...

The Supreme Court on Wednesday heard an application contending that the Indian Army has "not granted Permanent Commission to even 50% of women officers", challenging the arbitrary criterion adopted by Centre to "deny benefit to deserving women candidates".

The bench of Justices D. Y. Chandrachud, Indu Malhotra and Indira Banerjee adjourned the matter to December to allow time to the Centre to file its response.
The bench observed that no precipitate steps be taken in the interregnum, noting the statement of ASG Sanjay Jain to this effect.
In July, the Court had granted one month's time to the Centre to implement the grant of Permanent Commission and Command Posts for eligible women officers in the Indian Army.

When the matter came up on the docket on Wednesday, a letter had been circulated by the Government of India seeking time to file the counter.

Sr. Adv. P.S. Patwalia, appearing for the Petitioners, advance, "The three petitioners I am appearing for have not been granted Permanent Commission (PC). The declassified result has not been made officially available. So we have moved an application for interim relief. Petitioner No.1 has completed 20 years of service but has not been granted PC. She will now be released from service. Even if the release of the result cannot be stayed, we pray that status quo be maintained as far as I am concerned."

"She will qualify for pension anyway", pointed out Justice Chandrachud.

"The case of Petitioner No.3 is even more peculiar. She was selected three years ago for M. Tech in the College of Mechanical Engineering(CME). The course got over in July 2020. She was selected for this advanced course, and is now being imparted training for further promotion as Brigadier at the cost of the Indian Army. But she was not considered good enough for PC? This is the dichotomy", continued the Sr. Adv.

"We do not know why PC was not granted? What was the basis? There are some newspaper reports...rumours are floating...but this all hearsay in the air" contneded Mr. Patwalia.

"You have been put through a process. If you succeed, we can reinstate you. But how do we stay the release, when we don't have the Centre's affidavit?" ventured Justice Chandrachud.

"Why is the Centre not being able to file a reply. This is the third time they are seeking adjournment. They want to implement the decision of their SB 5 panel" argued Mr. Patwalia.

At this point, Adv. Shraddha Deshmukh appearing for the Union of India submitted that the Counter Affidavit is ready and will be filed in day or two.

"We do not want to embarass the Counsel. She says that the Counter Affidavit is ready and will be filed soon. So let us keep it for Friday? Is anything happening between today and Friday?" asked Justice Chandrachud.

"They are saying that out of the 600 applicants, 422 have been selected. This is a very large number and is not correct. This number of 422 includes the 57 who had opted out. It includes the officers of the low medical category who have been given time to shape up. So the PC has been reserved for them. There are those who have been held back for administrative reasons. Only 193 of these 600 officers have been effectively granted PC", intervened Sr. Adv. Meenakshi Arora.

"All these officers are in the category of 10-14 years of service, 14-20 years etc. They had filed the application in September- the government was aware of the apprehensions regarding the SB 5 Panel, the parameters. Some of them are highly decorated officers, having participated in the Vijay, Rakshak, Parakram operations. Their names have been recorded in your judgment as well as that of the High Court's, but they have not been approved for PC? What criteria, what parameters were followed by government's SB 5 Panel, what was the yardstick. The government cannot sit on the reply.", pressed Ms. Arora.

"Your Lordships judgment was a great march for the women in the armed forces. Let it not be a Pyrrhic victory for women" she advanced.

The bench enquired from Ms. Deshmukh if anything was to transpire between today and Friday. She replied that she did not have any instructions in this behalf.

"So we'll say that the Centre would not take any precipitate steps qua the petitioners in the next two days", suggested Justice Chandrachud.

"Or we can also say that any actions taken will be subject to the outcome of these petitions?", ventured Justice Malhotra.

At this, Ms. Deshmukh sought a pass over to seek instructions on whether the government planned to take any action till Friday.

"Yes, we will just roll it over. We do not want to embarass the Counsel. Let her check with the officers", allowed Justice Chandrachud.

When the matter was taken up later, Ms. Arora sought to correct her submission that officers 193 in number have not been approved, 277 have been approved and the rest have not opted for PC.

"I have been given to understand that the Counter Affidavit is ready and that these aspects need to be taken care of. There are 17 people before you and we will respond individually for each. 9 persons have not been approved and 7 have been withheld on administrative grounds and one of these 17 has got PC. We'll give a response as to the selection process. Please give us two weeks."

"Please advice the authorities that no precipitate steps are taken in the next two weeks as regards these 17 persons", said Justice Chandrachud.

"The State has made a categorical statement that these people will be released from service shortly with pension..." urged Ms. Arora.

"Mr. Jain has said that there will be no precipitate action since are seized of the matter. Mr. Jain, there is one case that Mr. Patwalia had pointed out of an officer who is doing M. Tech, please consider this case independently because if she is being considered for promotion as Brigadier, then why did she not get PC", observed Justice Chandrachud.

The ASG sought the name of the concerned officer from Mr. Patwalia.

"We have faced the same SB 5 thrice before for extension. It was the same board for PC. The male officers who faced the Board with us got PC and we got extension! After facing the Board thrice we were seen as not fit? I am just conveying the heartburn and the disappointment of these officers", pressed Mr. Patwalia.

"All we are saying today is that no precipitate steps be taken", said Justice Chandrachud.

"Considering the argument of prejudice from the other side, may I advance that out of the total 615 candidates, 422 were found fit on merits. ('This figure is off, some are still in the progress of being considered and some have been withheld', it was pointed out on the other side)....before the Board, the medical reports were not there. The Board examined it minus the medical reports", submitted the ASG.

Ms. Arora repeated the request that it may be recorded that no precipitate action be taken until the next hearing. "Mr. Jain is here. He has said that they are not doing anything.", said Justice Chandrachud.

"There is an application for impleadment...('Only 17 are before the court', said the ASJ)...there are 40 other similarly situated officers. The application would cover them also and they would also get protection...these are women who have been part of important operations", urged Ms. Arora.