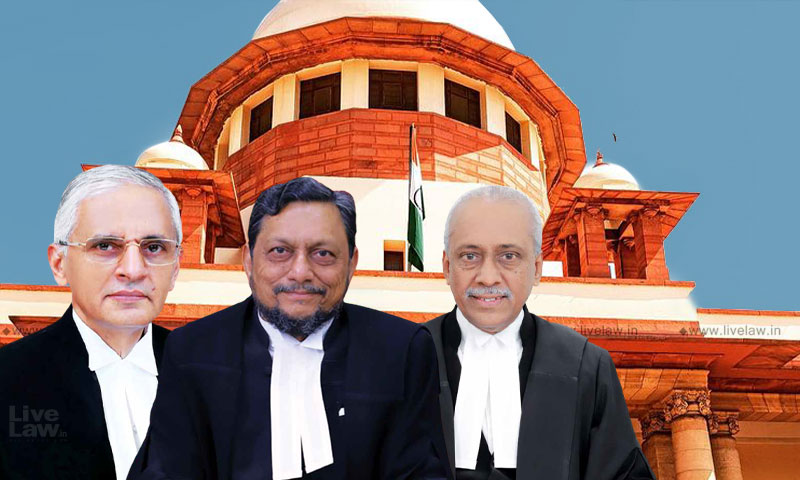 A three-judge Bench of CJI SA Bobde, Justice Bopanna and Justice Ramasubramanian has issued the direction while hearing a PIL filed by the Indian Medical Association challenging the Regulations framed by Central Council of Indian Medicine (CCIM) seeking to permit PG Ayurveda qualified persons to practice modern surgeries. The Court has issued notice returnable in 4 weeks and asked the Parties to file their replies and affidavits.

During the hearing today. IMA was represented before the Supreme Court by Mr. Maninder Singh, Senior Advocate and assisted by Advocate Prabhas Bajaj.

Senior Advocate Maninder Singh submitted that it will create havoc if they are allowed to do surgeries without any training.

Solicitor General Tushar Mehta submitted that the Concern being expressed is an over pitched concern, for something that has been going for very long.

"We will file an affidavit. Its been going on since long. I understand it concerns with health of citizens. Let us file response." SG Mehta said.

According to the petitioner, the impugned Regulations have been promulgated by the Central Council of Indian Medicine, and are beyond the power and jurisdiction of the CCIM. By issuing the impugned regulations, the CCIM has transgressed the boundaries of the Medicine Central Council Act 1970 enactment under which it has been created. The 1970 Act is in relation to the form of "Indian Medicine", distinct from the field of Modern Medicine.

The plea has stated that the impugned Regulations in relation to Indian Medicine, and being in the nature of a subordinate legislation, are contrary to the specific legislative policy declared by the Parliament under the provisions of the Medical Council Act 1956 as well as the Medicine Central Council Act 1970

The plea has stated that in addition to being contrary to the legislative policy declared by the Parliament the impugned Regulations, are also manifestly arbitrary and unreasonable, result in serious affront and prejudice to the constitutional and fundamental Rights of the citizens of this country to receive proper and effective medical care and treatment. The regulations also cause serious prejudice to the rights of millions of medical doctors across the country who have toiled hard and spent years of their life undergoing training for attaining the adequate exposure, experience and qualifications for performing surgeries under the modern scientific system of medicine.

"The impugned regulations have the potential, if not nipped at the bud, of causing serious risk to the safety and the treatment and management of patients who approach the Doctors for that purpose through the system of and field of Modern Medicine." The plea reads

The plea has further stated that even in the past, when similar attempts were made by the CCIM to transgress into the domain of the Modern Medicine, all such attempts were set aside by the Supreme Court and the High Courts across the country. The present issue is even more serious and critical as now, by the impugned Regulations, the CCIM has sought to permit practitioners of Indian System of Medicine to perform complicated modern surgical procedures, which is impermissible in law, beyond the powers and jurisdiction of CCIM and if allowed to operate, would create a havoc and chaos in the public healthcare.

The petitioner has cited Supreme Court's judgment in the case of Dr. Mukhtiar Chand & Ors. Vs. State of Punjab where it had held that the persons who are registered on Central or State Registers of Indian Medicine under the 1970 Act are prohibited from practicing Modern Medicine and this prohibition is also statutorily provided in Section 15(2)(b). The Court had further held that the stipulations for standards of education and practice of the profession of medicine directly affects the right to life which includes the health and well- being of a person.

The plea has further stated that the Supreme Court and the High Courts have also repeatedly held that the practitioners in one system of Medicine cannot be allowed to transgress into or practice in a completely different and distinct system of medicine and any such act of transgression would, apart from being illegal and unsustainable in law, also be detrimental to the society at large.

The plea has cited Kerala High Court's order in the case of National Integrated Medical Association Vs. State of Kerala & Ors. whereby it has set aside notifications issued by CCIM that sought to permit the persons holding qualifications under the system of Indian Medicine to also practice Modern Medicine. The High Court had held that the CCIM does not have any power or jurisdiction to permit any persons possessing qualification under the system of Indian Medicine to practice Modern Medicine which is governed by the separate and independent statutory scheme under the 1956 Act.

Therefore, the petitioner has argued that the impugned regulations are ultra vires, illegal, unconstitutional, manifestly arbitrary, unreasonable and unsustainable in law, and deserve to be set aside and quashed by the Supreme Court