"If Animals Don't Have Choice, Can They Have Liberty?", Supreme Court Commences Hearing Pleas Against Jallikattu & Similar Activities 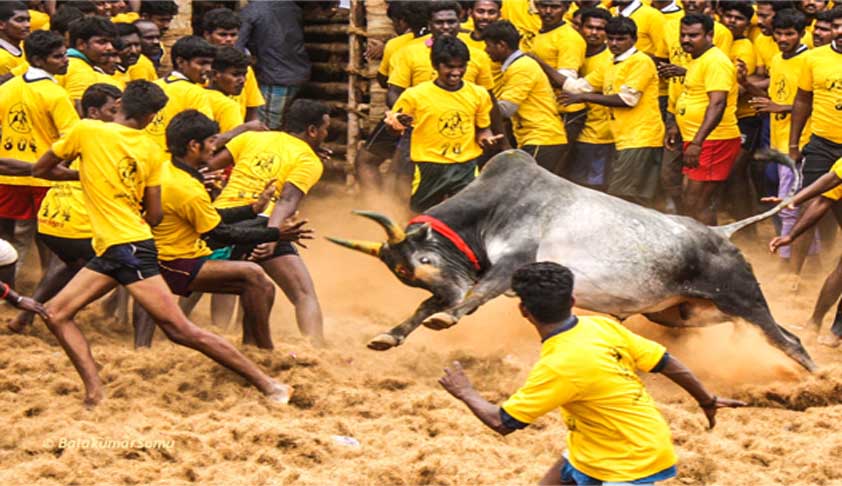 Representing the petitioners, Senior Advocate Siddharth Luthra, started his submissions today by first pointing out to the court the nature of legislations that are under challenge in the present batch of petitions. He then read out the specific provisions of the Impugned Amendment Acts from the states of Tamil Nadu, Karnataka and Maharashtra that are up for consideration before the bench.

Mr. Luthra then pointed out that he has also submitted several reports depicting the nature of activities that are followed in the kinds of sports that have been permitted in the impugned legislations. He said that there are visual representations of the activities that are carried out. At this point, Additional Solicitor General Gurmeet Singh Makker objected and said "I have an objection to these reports. There are pictures that have been put with statements and they are completely misleading. This has to come by way of an affidavit."

To that, Mr. Luthra responded by saying "We are just pointing to the nature of the sport and that is why we have presented this before the court."

Mr. Luthra further argued on the nature of the impugned legislations being colourable. Referring to the amendment made by Tamil Nadu legislative assembly to the Prevention of Cruelty to Animals Act in order to overcome the Supreme Court judgment which banned Jallikattu, he said, "Our case is that it is a colourable legislation. Even if the President's assent was taken, what was presented before the President. So list 2 is not available to you. You have gone to the President in list 3 bringing a statute preventing cruelty which is perpetuating cruelty. The Amendment decriminalises the criminal act. Something is inherently cruel which the findings of the court in Nagaraj has concluded."

He further read out the Aims and Objects as stated in the Impugned legislations and submitted that the larger aim of the Prevention of Cruelty to Animals Act was to prevent unnecessary cruelty to animals. However, the amendments have only perpetuated it.

Justice Joseph remarked. "Prevention of cruelty does not mean it is absolute. When you are talking of legislative competence, it is there. We only need to understand whether it is contrary to Nagaraj(SC judgment in Animal Welfare Board of India vs A Nagaraj)."

On the issue of legislative competence, Justice Joseph also remarked, "We cannot sit over the judgment of the legislature. Now if you say that this is manifestly arbitrary then that's a different area. To say that they didn't have the power is different."

Mr. Luthra replied, "On one hand we have the Central govt legislation stating the "non-performing animals", we have "Nagaraj" judgment and on the other which and on the other hand we have these legislations that allow for such practices." He then submitted "Our proposition is this. We have the benefit of Nagaraj. All these three state amendments do not either deal with or prevent cruelty. They are in the face of Nagaraj. They are destructive of the main objects of the principle Central Act."

Post this, Justice Joseph remarked - "But what I was saying is that in sports like boxing also they even die."

Mr. Luthra responded by saying - "It's a question of informed choice my lords. That's the difference."

Justice Joseph - If animals don't have choice, can they have liberty?

Mr. Luthra answered by saying "There is a distinction. When we are dealing with fight response. When we are inducing fear in an animal, that itself is problematic. It is not that animals won't fight. But here we are pushing them into a situation like this for our entertainment. Can we allow cultural rights or practices that are contrary and abhorrent to the constitution to continue. We need to look at the inherent nature of the activity. When you release the animal among people what is it going to do? It is going to either fight or be hurt. I have presented the pictures only to show that."

It is important to point out that the present batch of petitions were initially filed to quash and set aside a notification issued by the Union of India on 07.01.2016 and to direct the concerned States to comply with the judgment of the Apex Court in Animal Welfare Board of India v. A. Nagaraja And Ors. (2014) 7 SCC 547. While the matter was pending, the Prevention of Cruelty to Animals (Tamil Nadu Amendment) Act, 2017 was passed. Thereafter, the writ petitions were modified to seek quashing of the said Amendment Act. The Supreme Court had then referred the matter to a constitution bench on whether Tamil Nadu can conserve Jallikattu as its cultural right under Article 29(1) of the Constitution which guarantees protection to cultural rights of citizens. A Division bench of Chief Justice Dipak Misra and Justice Rohinton Nariman had felt the writ petition revolving around Jallikattu involved substantial questions relating to interpretation of the Constitution and referred the matter to the constitution bench with five questions to decide on besides those raised in the writ petitions.