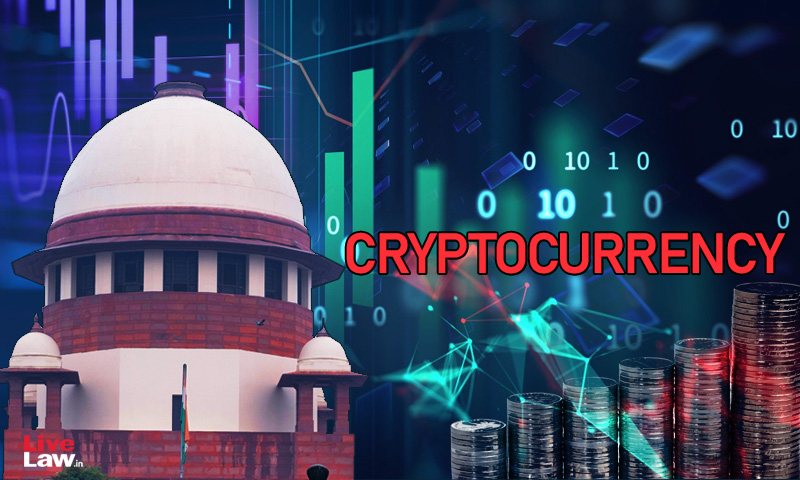 While dealing with the writ petition preferred by Ajay Bhardwaj, one of the accused in the Giant Bitcoin scam, the Supreme Court on Monday asked Bhardwaj to make full disclosure to the Enforcement Directorate the usernames and password of the crypto currency wallet for getting interim protection.The bench of Justices DY Chandrachud and Surya Kant subject to Bhardwaj making full disclosure of...

While dealing with the writ petition preferred by Ajay Bhardwaj, one of the accused in the Giant Bitcoin scam, the Supreme Court on Monday asked Bhardwaj to make full disclosure to the Enforcement Directorate the usernames and password of the crypto currency wallet for getting interim protection.

The bench of Justices DY Chandrachud and Surya Kant subject to Bhardwaj making full disclosure of the username and passwords of the crypto currency wallets directed for continuation of the interim protection which was granted to Bhardwaj.

The bench also directed the Additional Solicitor General appearing forthe  ED to file an updated status report on the next date of hearing.

Accordingly the bench in its order said, "An application for cancellation of bail has been filed by the respondents. ASG Bhati has submitted a status report on behalf of ED. ED has submitted that the brother of petitioner has died, petitioner is in possession of username and Password of crypto wallets which must be disclosed to the Investigating Officer. Ld Counsel states that some part of the material is in custody of Pune police and that the petitioner through his instructions has disclosed relevant details. We ask the petitioner to file a reply for application of cancellation of bail within 2 weeks. In the meantime the petitioner shall cooperate fully with the investigation. Since Sr Counsel for petitioner states that disclosure has been made of the user names and passwords, there would be no difficulty for the petitioner to make full disclosure conditional on which the ad Interim protection to continue. Updated status report shall be filed by ED."

It may be noted that the Top Court on February 25, 2022 had made an oral remark that the Centre ought to clarify the legal status regarding cryptocurrencies like bitcoin, and whether dealing in them is an offence.

The comment, at the instance of Justice Surya Kant (who was in a bench led by Justice DY Chandrachud), came when Additional Solicitor General Aishwarya Bhati, for the ED, urged that the GainBitcoin scam accused Ajay Bhardwaj is not cooperating in the investigation.

Reportedly, Ajay Bhardwaj's brother, Amit Bhardwaj, the alleged mastermind behind the GainBitcoin scam, was arrested in March 2018 and later granted bail by the Supreme Courton April 3, 2019. Amit Bhardwaj had founded a slew of companies and is infamous for running GainBitcoin, an MLM scheme that promised 10% monthly returns on bitcoin investments.

When the matter was called for hearing, Senior Advocate PC Sen for the accused submitted that pursuant to the directions of the Top Court the petitioner had joined investigation on 10 dates.

"I have been directed to join the investigation over 10 dates I have joined 65 hours of questioning. To my extent, I work in Delhi but I have always gone whenever I have been called. Certain things that I was evasive about regarding directorship that I could not recall. I have my PAN number wherein everything is on record" submitted Senior Advocate PC Sen.

Appearing for the ED, ASG Aishwarya Bhati at this juncture submitted that ED had filed a status report and an application for cancellation of bail.

"The focal point here is that it is investment through bitcoin and not through normal banking channels," ASG submitted.

The bench at this juncture pointed out to the affidavit wherein ED had stated that Amit Bhardwaj who was in possession of the crypto wallets, the ID's etc.

Senior Advocate PC Sen with regards to the crypto wallets submitted that Pune Police had done full seizure and that all the material was lying with them.

"Ms Bhati, let him attend the investigation," remarked Justice Chandrachud at this juncture.

Contending that there were 4 members of the family who were accused in the matter, ASG Bhati urged the bench to direct the petitioner to give the passwords and the user names.

"This is not in banking channels therefore user name, passwords etc. This is not money in which is held otherwise in regular routine," submitted ASG.

With regards to the submissions made by ASG, Justice DY Chandrachud said, "Mr Sen, you must give them, otherwise, how will they investigate it if you don't disclose it?"

"Wallets have been seized by Pune Police. I have nothing to hide," responded Senior Advocate PC Sen.

The bench at this juncture while expressing its inclination to continue granting interim protection and asking him to cooperate in investigation asked the petitioner to disclose the user names and password of the wallet.

Pursuant to the bench passing an order, ASG Bhati while drawing attention to the reliefs sought by the petitioner asked the bench to consider all the petitions qua the same FIR together. She further submitted that the issue with regards to "legality of crypto currency" did not arise in the matter since all the matter pertained to ponzi scheme.

"Last time your lordship was pleased to put before ASG to come back as to what was their stand," submitted Senior Advocate PC Sen at this juncture.

"You first cooperate and that we'll see on the next date. We have taken note of Mrs Bhati's submissions," remarked Justice Chandrachud.

Advocate Shoeb Alam submitted that an application for cancellation of bail was moved by him since the petitioner had not made proper disclosures. He also sought court's permission to argue in the matter.