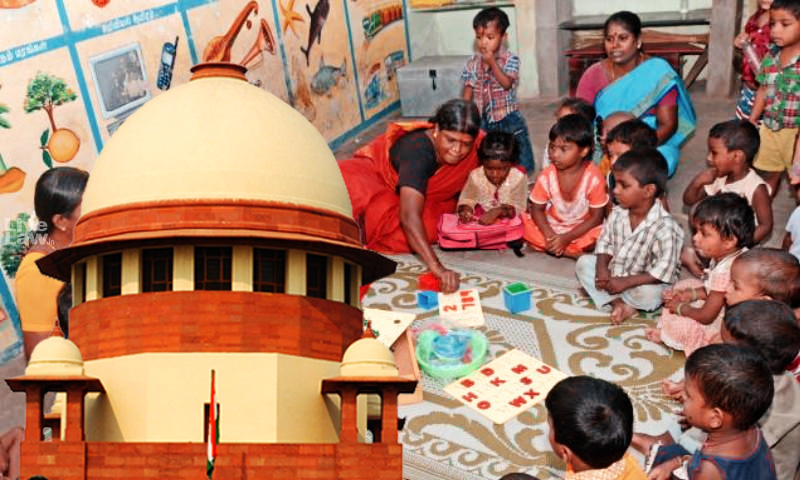 The National Commission for Protection of Child Rights ("NCPCR") apprised the Supreme Court, on Monday, that it has developed a separate portal for Non-Government Organisations ("NGOs") and individuals who are interested to assist in the process of identification of the Children in Street Situation ("CiSS"). On the last occasion, a Bench comprising Justices L. Nageswara Rao and B.R....

The National Commission for Protection of Child Rights ("NCPCR") apprised the Supreme Court, on Monday, that it has developed a separate portal for Non-Government Organisations ("NGOs") and individuals who are interested to assist in the process of identification of the Children in Street Situation ("CiSS").

On the last occasion, a Bench comprising Justices L. Nageswara Rao and B.R. Gavai had asked the NCPCR to involve NGOs and Child Rights Activists to expedite the process of identification.

Perturbed by the slow progress in the identification process, on Monday, it observed -

"Since all the States are here, the number of children identified as appearing from the web portal is paltry, if we can use that word. We were told last time that there are about 1.5 million children. Only 17000 children have been identified. Ask your officers to be a little vigilant."

Additional Solicitor General, Mr. K.M. Nataraj, appearing on behalf of the NCPCR had apprised the Bench that it has come up with a new portal encouraging NGOs and individuals to provide assistance in the process of identification.

"We have developed a new portal within a short span. There are broadly two categories. One is for reporting and the other one is for NGOs and organisations who want to assist to identify. It is notified and operational."

The link to the concerned portal is https://ncpcr.gov.in/baalswaraj/citizenlogin through which NGOs and individuals can report information about a CiSS and/or register and give information about the services which they are willing to provide.

Those who want to report about a CiSS can do so by filling up a form seeking their particulars and that of the child. Once the form is submitted a ticket number would be generated which will be sent to the informant's mobile/email id. The form would be sent to the Baal Swaraj Portal-CiSS account of the concerned District Child Protection Officer (DCPO), who can either accept the form or reject it. If the form is accepted the information will be merged with the existing entries on the Baal Swaraj Portal-CiSS.

Individuals and NGOs willing to provide assistance in rescue and rehabilitation of CiSS can register to provide services, such as, Counselling, Medical service, Sponsorship, de-addiction services, education services, legal/paralegal services, volunteering services, student volunteer, identification of hotspot, identification of CiSS and any other assistance. The individuals/NGOs willing to engage in such services have to produce a police verification certificate. The list of such individuals/NGOs will be made available with the DCPO.

A detailed flowchart has been provided by the NCPCR in its affidavit dated 22.04.2022.

In the said affidavit NCPCR has stated that the Standard Operating Procedure for Care and Protection of Children in Street Situation 2.0 ("SOP 2.0") drafted by the National Commission for Protection of Child Rights ("NCPCR") with respect to rescue and rehabilitation of Children in Street Situations ("CiSS") acknowledged that the NGOs play a vital role in the process. In the affidavit it has culled out the functions for which the NGOs can be engaged by the concerned authorities.

a. Information, Preparation and Reporting of a CiSS - NGOs or individuals having information of a CiSS can produce the child before the concerned Child Welfare Committee (CWC) as per Section 31(1) of the Juvenile Justice (Care and Protection of Children) Act, 2015 ("JJ Act") or share their information with Childline -1098.

b. If a child is living with family on the street - The child along with the entire family is to be provided counselling by NGOs. Later, the issues gathered from counselling can be addressed by the concerned authorities with the assistance of the NGOs.

c. If child is addicted to substances, out of school, child labour, rag picker and victim of offence - These children can be provided with counselling, legal assistance, de-addiction services by the NGOs. In cases of children who are victims of offences, the NGOs must ensure that FIR is lodged and provide financial and medical assistance to the victims.

Thereafter, the affidavit suggested ways in which the rehabilitation can be made more effective by involving NGOs :

a. CWC can assign a local NGO to provide support and carry out family strengthening programs.

It also submitted that NCPCR had at every stage involved all stakeholders including NGOs. It had organised meetings wherein NGOs across the country had participated. Their suggestions were highlighted in the affidavit as under -

a. Identifying hotspot areas where the issue of CiSS is prevalent; taking preventive measures; linking the families living on the streets with relevant schemes, making sure that children go to school and creating livelihood opportunities for parents.

b. Importance of the framework provided in the JJ Act for children in need of care and protection.

The affidavit indicates that the NCPCR had, inter alia, made suggestions to the NGOs regarding constitution of women and child department at the village and block level for effective implementations of the provision of the statute.

Mr. Amod K. Kanth, General Secretary, Prayas Juvenile Aid Centre, submitted that the CiSS were essentially 'children in need of care and protection' ("CNCP") as defined under Section 2(14) of the JJ Act and therefore, the scheme of the JJ Act would squarely cover them. He submitted -

"5 months and 9 days later, 17914 children have been brought on the portal…Prayas has registered 1 lakh 94 thousand children. Most of these children are in need of care and protection. Section 2(14) of JJ defines the CNCP children…CiSS children are nothing but CNCP children…"

He informed the Bench that the Childline and the Child Care Institutions across the country are primarily run by NGOs. Therefore, he submitted, that it was crucial that these organisations are associated directly with the process of identification -

"Let us think in terms of CNCP children. Only Prayas Childline in the past two years of COVID times have brought 11445 children…The 750 Childlines in the country, is Govt. project run entirely by voluntary organisations. There are 7000 odd child care institutions in the country, most run by voluntary organisations…The childlines and child care institutions have brought information about almost 6 lakh children…The idea is that these children in life threatening situations have to be looked after. Today, there has to be a system through which the voluntary organisations who are actually running the entire system…They have to be associated directly."

He added that the Childlines and the Child Care Institutions have information of about 6 lakh children in need of care and protection.

"Section 32, 33 states that nobody can produce these children except through childlines, child care institutions. We are talking about 6 lakh children's information already being there."

Justice Rao asked, "Why don't you provide the information?"

Mr. Kanth responded, "We cannot do that without a direction."

Justice Rao stated that Mr. Kanth's organisation will be permitted to provide information.

"We will permit you to do that now. Your organisation can update that on the portal…You have to properly associate yourself with the Government. For 9 months we have been looking where these children are. Now that you have come with information of identified children, you provide the information, we will ask the Govt. to act."

In its order dated 13.12.2021, the Bench had noted that Save the Children had already identified 2 lakh children in four States, namely, Uttar Pradesh, Maharashtra, West Bengal and Delhi.

In view of the same, Mr. Kanth submitted that when the information of 2 lakh children were already available why does the portal reflect only 17,000 children as identified.

"The entire issue started with Save the Children, our sister organisation. There were 2 lakh children. Where is that information? Why is it only 17,000?"

Justice Rao enquired, "Have the organisation, Save the Children, given you (NCPCR) the particulars of the 2 lakh children? Are all the children identified"

Advocate, Ms. Swarupama Chaturvedi appearing for the NCPCR responded, "Not all. We have issued letters to concerned States to identify.

"If some of them have been identified then why do we have 17,000?...If the step to be taken at the threshold is being delayed, can we provide impetus to this identification process by actively involving (NGOs)."

Amicus Curiae, Mr. Gaurav Agarwal submitted that he would provide a copy of the affidavit filed by NCPCR to Mr. Kanth.

Mr. Kanth suggested that given most of the NGOs working in the filed of Child Rights are associated with the flagship schemes of the Government of India, if the said schemes are made a part of the present exercise conducted by the Apex Court to identify, rescue and rehabilitation the CiSS, the NGOs will automatically get engaged, which would only facilitate the said exercise.

"There is a complete scheme under law - JJ Act. There are also flagship schemes by the Govt of India - Mission Vatsalya, Mission Shakti and Mission Poshan. We are all party to it. I submit that these schemes should be a part of this exercise. In that case a lot of organisations will be automatically engaged."

Justices Rao stated that the Bench would consider the same.

During the course of the hearing, Advocate, Mr. Sachin Patil, appearing for the State of Maharashtra informed the Bench that an application had been filed by him seeking directions to the Ministry of Women and Child Development to grant the State Government 21 open shelters for rehabilitation of the CiSS. In this regard, the Bench asked Additional Solicitor General, Ms. Aishwarya Bhati, appearing for the Ministry, to submit a status report within two weeks.

The Bench appreciated the efforts put in by the Amicus in the ongoing exercise taken up by the Bench.

"Mr. Agarwal is taking a lot of interest in this. He is visiting the homes and all."