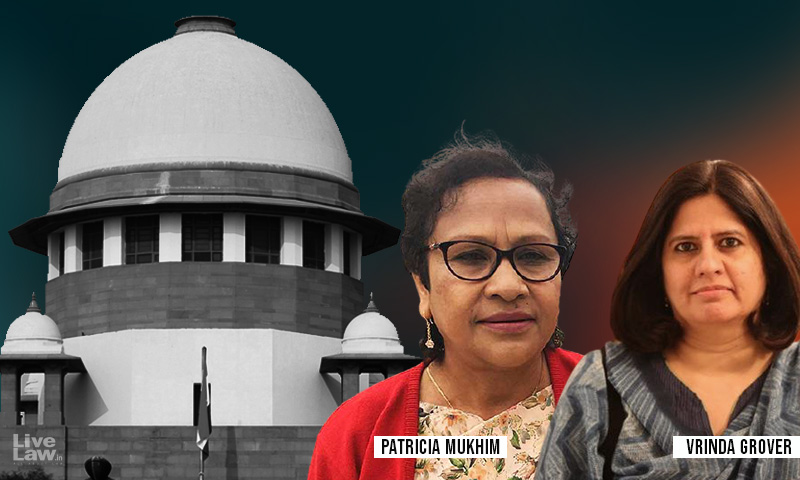 x
""The fervent plea made by the Appellant for protection of non-tribals living in the State of Meghalaya and for their equality cannot, by any stretch 13 | P a g e of imagination, be categorized as hate speech. It was a call for justice - for action according to law, which every citizen has a right to expect and articulate", said Supreme Court

The Supreme Court on Thursday quashed the FIR registered against Shillong Times Editor Patricia Mukhim over a Facebook post on violence against non-tribal people in Meghalaya. The Court allowed the appeal filed by Mukhim challenging the Meghalaya High Court order which had dismissed her plea to quash the FIR. The bench comprising Justices L. Nageswara and S. Ravindra Bhat noted that...

The Supreme Court on Thursday quashed the FIR registered against Shillong Times Editor Patricia Mukhim over a Facebook post on violence against non-tribal people in Meghalaya.

The Court allowed the appeal filed by Mukhim challenging the Meghalaya High Court order which had dismissed her plea to quash the FIR.

The bench comprising Justices L. Nageswara and S. Ravindra Bhat noted that the Facebook post was directed against the apathy shown by the Chief Minister of Meghalaya, the Director General of Police and the Dorbar Shnong of the area in not taking any action against the culprits who attacked the non-tribals youngsters.

"The fervent plea made by the Appellant for protection of non-tribals living in the State of Meghalaya and for their equality cannot, by any stretch 13 | P a g e of imagination, be categorized as hate speech. It was a call for justice - for action according to law, which every citizen has a right to expect and articulate. Disapprobation of governmental inaction cannot be branded as an attempt to promote hatred between different communities, the court said.

The court allowed the appeal filed by Mukhim challenging the Meghalaya High Court order which had dismissed her plea to quash the FIR. Referring to Sections 153 A and 505 (1) (c) of the Indian Penal Code, the bench observed that only where the written or spoken words have the tendency of creating public disorder or disturbance of law and order or affecting public tranquility, the law needs to step in to prevent such an activity. It said:

The intention to cause disorder or incite people to violence is the sine qua non of the offence under Section 153 A IPC and the prosecution has to prove the existence of mens rea in order to succeed. The gist of the offence under Section 153 A IPC is the intention to promote feelings of enmity or hatred between different classes of people. The intention has to be judged primarily by the language of the piece of writing and the circumstances in which it was written and published. The matter complained of within the ambit of Section 153A must, be read as a whole. One cannot rely on strongly worded and isolated passages for proving the charge nor indeed can one take a sentence here and a sentence there and connect them by a meticulous process of inferential reasoning.

Referring to the Facebook post made by Mukhim, the bench observed that her fervent plea for protection of non-tribals living in the State of Meghalaya and for their equality cannot, by any stretch of imagination, be categorized as hate speech.

"At the most, the Facebook post can be understood to highlight the discrimination against non-tribals in the State of Meghalaya. However, the Appellant made it clear that criminal elements have no community and immediate action has to be taken against persons who had indulged in the brutal attack on non-tribal youngsters playing basketball. The Facebook post read in its entirety pleads for equality of non-tribals in the State of Meghalaya. In our understanding, there was no intention on the part of the Appellant to promote class/community hatred. As there is no attempt made by the Appellant to incite people belonging to a community to indulge in any violence, the basic ingredients of the offence under Sections 153 A and 505 (1) (c) have not been made out. Where allegations made in the FIR or the complaint, even if they are taken on their face value and accepted in their entirety do not prima facie constitute any offence or make out a case against the accused, the FIR is liable to be quashed.", the bench said.

The bench particularly referred to a judgment the Canadian Supreme Court [Saskatchewan (Human Rights Commission) v. Whatcott] which explained a workable approach in interpreting "hatred" as is used in legislative provisions prohibiting hate speech. It noted:

"The first test was for the Courts to apply the hate speech prohibition objectively and in so doing, ask whether a reasonable person, aware of the context and circumstances, would view the expression as exposing the protected group to hatred. The second test was to restrict interpretation of the legislative term "hatred" to those extreme manifestations of the emotion described by the words "detestation" and "vilification". This would filter out and protect speech which might be repugnant and offensive, but does not incite the level of abhorrence, delegitimization and rejection that risks causing discrimination or injury. The third test was for Courts to focus their analysis on the effect of the expression at issue, namely, whether it is likely to expose the targeted person or group to hatred by others. Mere repugnancy of the ideas expressed is insufficient to constitute the crime attracting penalty."

While allowing the appeal, the court observed:

India is a plural and multicultural society. The promise of liberty, enunciated in the Preamble, manifests itself in various provisions which outline each citizen's rights; they include the right to free speech, to travel freely and settle (subject to such reasonable restrictions that may be validly enacted) throughout the length and breadth of India. At times, when in the legitimate exercise of such a right, individuals travel, settle down or carry on a vocation in a place where they find conditions conducive, there may be resentments, especially if such citizens prosper, leading to hostility or possibly violence. In such instances, if the victims voice their discontent, and speak out, especially if the state authorities turn a blind eye, or drag their feet, such voicing of discontent is really a cry for anguish, for justice denied – or delayed. This is exactly what appears to have happened in this case.

Advocate Vrinda Grover appearing on behalf of the petitioner had submitted that the heart of the entire controversy is petitioner's Facebook post. A complaint was made against the post by a member of Dorbor Shnong, a community in the East Khasi Hills, on 6th July and FIR was filed on 7th July. However, Grover alleged that the contents of her post were edited and words were replaced placed before the police. One extract was selectively placed before the police instead of the entire post.

With regards to the Makhim's Facebook post, Grover had submitted that the intention of the post was not to create any disharmony, but was in fact precisely the opposite. The post did not call upon two communities or groups, but called upon the Chief Minister and Director General of Police instead, while condemning the atrocities committed on the minority.

"The Facebook post is only making a comment that non tribal boys have been targeted violently and State must ensure that it doesn't happen. Why do i call on the Dorbor Shnong? Because communities have a social influence and i wanted that the black sheep of the community are called out. " Makhim's Counsel had stated.

Senior Advocate Vrinda Grover had relied on several judgements of the Supreme Court including the case of Manzoor Sayyed Khan vs State of Maharashtra, and how the law related to Section 153 A was interpreted by the Court. She stated that in the case of Ramesh vs Union of India, that dealt with the issue around TV serial Tamas, it was held that TV serial Tamas did not depict communal violence and therefore would not fall under section 153 A. Even in the recent judgement in the case of Amish Devgan judgement the threshold and bar as to what speech would not be protected was clarified.

Relying on these judgements, petitioner's Counsel submitted that what needs to be seen is what was said in the post and what was the intent and purpose of purpose of saying that. She had clarified that in the impugned post, attention of the Stature Authorities including the CM and DGP was drawn by the petitioner to ensure that violence and attacks on community came to an end. The petitioner was fulfilling her responsibility as a Senior Journalist and as a responsible citizen

"I'm exhorting everyone to rise beyond their caste and communities. I am not talking about any 2 communities here! I am fulfilling my responsibility as a senior journalist and as a responsible citizen." Vrinda Grover stated

The State had however submitted that the fact that the petitioner is a well know journalist is relevant as in that case the possible and probable effect of her actions would be high. With respect to the incident that Mukhim's post had discussed, Advocate Tripathi appearing for the State had added that action was being taken and everything was being done. FIRs were being filed.

Advocate Tripathi had submitted that it is expected of a journalist of that repute to ascertain the facts before writing something, that too when she has so many followers. A communal colour was given to an incident which was a small scuffle between two guys, which the police was already investigating.

"Mr Tripathi please don't go all over the place. Just tell us why ingredients of 153A are not made out. We know we have limited jurisdiction in the case " the Bench had observed

The Bench observed that for quashing of FIR, the test adopted by the Court is to take allegations of complaint as they are without seeing defence of the accused. If the allegations don't make an offence under the section then the FIR is quashed.

The plea was filed through Advocate Prasanna S. and drafted by Advocate Soutik Banerjee.

The plea had contended that the Meghalaya High Court had passed an erroneous order wherein it had ignored settled precedent and declined to exercise powers vested in in under Section 482 Cr.PC.. The High Court allegedly allowed "victimization, persecution, abuse of process of law and also stifling of the fundamental rights of the Petitioner under Articles 19(1)(a) and 21 of the Constitution of India by dismissing Makhim's challenge to the FIR.

According to the Petitioner, she is facing a persecution for speaking the truth and seeking enforcement of rule of law against perpetrators of hate crime, in exercise of her fundamental right as guaranteed under Article 19(1)(a) of the Constitution of India. A plain reading of the her Facebook post makes it clear that the intent and purpose of this post is to appeal for impartial enforcement of rule of law; equal treatment before the law of all citizens; condemnation of targeted violence against members of a minority group; an end to impunity for violence and thereby ensure peace and harmony between communities and groups.

The petitioner has contended that being non-cognisable, offences under Section 500 and 505(c) cannot be investigated vide registration of an FIR in view of the of the statutory bar against such prosecution, and that the entire proceedings against the Petitioner stands on a single limb, i.e. Section 153A, which is not made out against the Petitioner.