"Such Chilling Effect On The Freedom of Speech Is An Assault ….": Quotable Quotes From CJI Ramana's Order In Pegasus Snooping Case 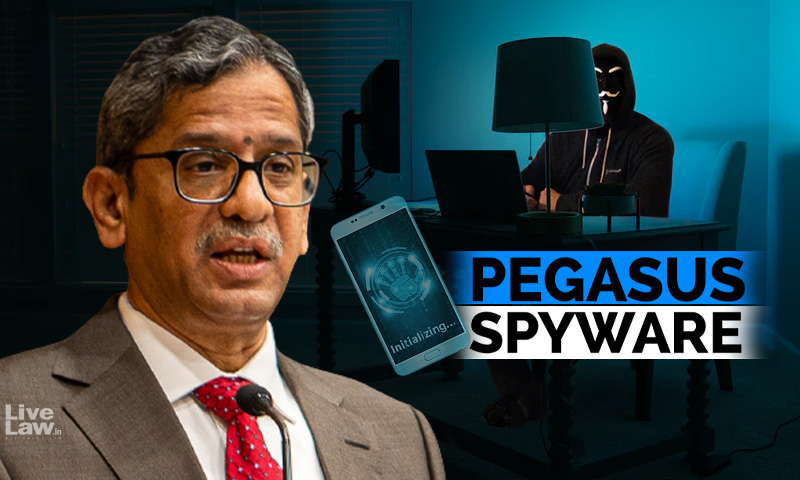 The Supreme Court order in Pegasus Spyware petitions started with a quote from the famous novel 1984 by George Orwell: "If you want to keep a secret, you must also hide it from yourself." The court said that writ petitions raise an Orwellian concern, about the 'alleged possibility of utilizing modern technology to hear what you hear, see what you see and to know what you ...

The Supreme Court order in Pegasus Spyware petitions started with a quote from the famous novel 1984 by George Orwell: "If you want to keep a secret, you must also hide it from yourself."  The court said that writ petitions raise an Orwellian concern, about the 'alleged possibility of utilizing modern technology to hear what you hear, see what you see and to know what you do.'

The following are important observations made in the order.

Not Entering Political Thicket, But Court Has Never Cowered From Protecting All From Abuses Of Fundamental Rights

We make it clear that our effort is to uphold the constitutional aspirations and rule of law, without allowing ourselves to be consumed in the political rhetoric. This Court has always been conscious of not entering the political thicket. However, at the same time, it has never cowered from protecting all from the abuses of fundamental rights

We live in the era of information revolution, where the entire lives of individuals are stored in the cloud or in a digital dossier. We must recognize that while technology is a useful tool for improving the lives of the people, at the same time, it can also be used to breach that sacred private space of an individual (Para 31)

Members of a civilized democratic society have a reasonable expectation of privacy. Privacy is not the singular concern of journalists or social activists. Every citizen of India ought to be protected against violations of privacy. It is this expectation which enables us to exercise our choices, liberties, and freedom. (Para 32)

Although declared to be inalienable, the right to privacy of course cannot be said to be an absolute, as the Indian Constitution does not provide for such a right without reasonable restrictions. As with all the other fundamental rights, this Court therefore must recognize that certain limitations exist when it comes to the right to privacy as well. However, any restrictions imposed must necessarily pass constitutional scrutiny. (Para 33)

Indiscriminate spying on individuals cannot be allowed except with sufficient statutory safeguards,

The right to privacy is directly infringed when there is surveillance or spying done on an individual, either by the State or by any external agency. (Para 35)

Of course, if done by the State, the same must be justified on constitutional grounds. This Court is cognizant of the State's interest to ensure that life and liberty is preserved and must balance the same. For instance, in today's world, information gathered by intelligence agencies through surveillance is essential for the fight against violence and terror. To access this information, a need may arise to interfere with the right to privacy of an individual, provided it is carried out only when it is absolutely necessary for protecting national security/interest and is proportional. The considerations for usage of such alleged technology, ought to be evidence based. In a democratic country governed by the rule of law, indiscriminate spying on individuals cannot be allowed except with sufficient statutory safeguards, by following the procedure established by law under the Constitution. (Para 36)

Chilling effect on the freedom of speech

It is undeniable that surveillance and the knowledge that one is under the threat of being spied on can affect the way an individual decides to exercise his or her rights. Such a scenario might result in self­ censorship. This is of particular concern when it relates to the freedom of the press, which is an important pillar of democracy. Such chilling effect on the freedom of speech is an assault on the vital public­ watchdog role of the press, which may undermine the ability of the press to provide accurate and reliable information. (Para 39)

Protection of journalistic sources is one of the basic conditions for the freedom  of the press. Without such protection, sources may be deterred from assisting the press in informing the public on matters of public interest. .. Having regard to the importance of the protection of journalistic sources for press freedom in a democratic society and the potential chilling effect that snooping techniques may have, this Court's task in the present matter, where certain grave allegations of infringement of the rights of the citizens of the country have been raised, assumes great significance. (Para 40-41)

Trigger Happy Filing Of Half Baked Petitions Must Be Discouraged

This Court has generally attempted to discourage Writ Petitions, particularly Public Interest Litigations, which are based entirely on newspaper reports without any additional steps taken by the Petitioner. (Para 42)

While we understand that the allegations made in these petitions pertain to matters about which ordinary citizens would  not have information except for the investigating reporting done by news agencies, looking to the quality of some of the petitions filed, we are constrained to observe that individuals should not file half­baked petitions merely on a few newspaper reports. Such an exercise, far from helping the cause espoused by the individual filing the petition, is often detrimental to the cause itself. This is because the Court will not have proper assistance in the matter, with the burden to even determine preliminary facts being left to the Court. It is for this reason that trigger happy filing of such petitions in Courts, and more particularly in this Court which is to be the final adjudicatory body in the country, needs to be discouraged. (Para 43)

This should not be taken to mean that the news agencies are not trusted by the Court, but to emphasize the role that each pillar of democracy occupies in the polity. News agencies report facts and bring to light issues which might otherwise not be publicly known. These may then become the basis for further action taken by an active and concerned civil society, as well as for any subsequent filings made in Courts. But newspaper reports, in and of themselves, should not in the ordinary course be taken to be ready­made pleadings that may be filed in Court. (Para 43)

On Stand Taken by Centre

Union of India should not take an adversarial position when the fundamental rights of citizens are at threat. (Para 46)

This free flow of information from the Petitioners and the State, in a writ proceeding before the Court, is an important step towards Governmental transparency and openness, which are celebrated values under our Constitution. (Para 47)

Of course, the Respondent ­Union of India may decline to provide information when constitutional considerations exist,  such as those pertaining to the security of the State, or when there is a specific immunity under a specific statute. However, it is incumbent on the State to not only specifically plead such constitutional concern or statutory immunity but they must also prove and justify the same in Court on affidavit. The Respondent Union of India must necessarily plead and prove the facts which indicate that the information sought must be kept secret as their divulgence would affect national security concerns. They must justify the stand that they take before a Court. The mere invocation of national security by the State does not render the Court a mute spectator. (Para 50)

Unauthorized surveillance/accessing of stored data from the phones and other devices of citizens for reasons other than nation's security would be illegal, objectionable and a matter of concern.

Different forms of surveillance and data gathering by intelligence agencies to fight terrorism, crime and corruption in national interest and/or for national security, are accepted norms all over the world.There is thus a broad consensus that unauthorized surveillance/accessing of stored data from the phones and other devices of citizens for reasons other than nation's security would be illegal, objectionable and a matter of concern. (Para 52)