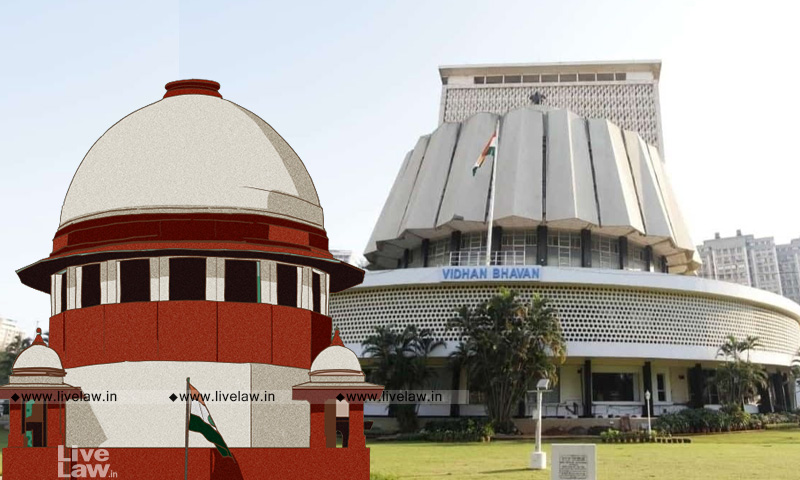 The Supreme Court on Friday quashed the Maharashtra Legislative Assembly's resolution of July 5, 2021, which suspended 12 BJP MLAs for a period of one year for alleged disorderly behaviour in the house.The Court held that the resolution to suspend the MLAs beyond the session is "unconstitutional", "illegal" and "beyond the powers of the assembly". It held that such suspension could be...

The Supreme Court on Friday quashed the Maharashtra Legislative Assembly's resolution of July 5, 2021, which suspended 12 BJP MLAs for a period of one year for alleged disorderly behaviour in the house.

The Court held that the resolution to suspend the MLAs beyond the session is "unconstitutional", "illegal" and "beyond the powers of the assembly". It held that such suspension could be limited only to the ongoing session, which was the Monsoon Session of 2021(case :Ashish Shelar And Ors. Versus The Maharashtra Legislative Assembly & Anr).
.The operative portion of the order said as follows :

"...we have no hesitation in allowing these writ petitions and to declare that the impugned resolution directing suspension of the petitioners beyond the period of the remainder of the concerned Monsoon Session held in July 2021 is non-est in the eyes of law, nullity, unconstitutional, substantively illegal and irrational. The impugned resolution is, thus, declared to be ineffective in law, insofar as the period beyond the remainder of the stated Session in which the resolution came to be passed.

"As a result of the stated declaration, the petitioners are entitled for all consequential benefits of being members of the Legislative Assembly, on and after the expiry of the period of the remainder of the concerned Session in July 2021. The writ petitions are allowed in the above terms"

A bench of Justices AM Khanwilkar, Dinesh Maheshwari and CT Ravikumar delivered the judgment allowing a batch of writ petitions filed by the 12 MLAs challenging the assembly resolution. Detailed judgment is to be uploaded.

During the hearing, the bench had orally observed that the suspension beyond a session was disproportionate and "worse than expulsion". If it was a case of expulsion, there could be a by-election to fill up the vacancy. The bench had opined that such suspension, which exceeds the term of a session, will amount to a punishment of the constituency, as it remains unrepresented in the Assembly. The bench had also remarked that it can be "dangerous to democracy" as well since it can result in the manipulation of majority in the house when voting on important matters arise.

The bench had pointed out that as per the relevant rules, the Assembly has no power to suspend a member beyond 60 days. In this regard, the bench referred to Article 190(4) of the Constitution which says that a seat will be deemed to have become vacant if a member remains absent in the House without its permission for a period of 60 days.

"Where a vacancy is there, elections have to be conducted. In case of suspension, there will not be an election but if a person is expelled then election will be conducted. Another is danger to the democracy. Suppose there is a slender lead of the majority, and 15/20 people are suspended, what would be the fate of democracy?" Justice CT Ravikumar had observed.

"There has to be some rational & constitutional principle that houses meet in sessions. If a house is elected, what is the concept of meeting in sessions only? A particular session he may be suspended but beyond that time the rationality question comes," Justice Dinesh Maheshwari remarked.

"Suspension is essentially a disciplinary measure. It must follow that suspension for a period of one year would assume the character of punitive and punishment worse than expulsion. For, suspension for long period and beyond the Session has the effect of creating a de facto vacancy though not a de jure vacancy"

"Be it noted that suspension beyond the remainder period of the ongoing Session would not only be grossly irrational measure, but also violative of basic democratic values owing to unessential deprivation of the member concerned and more importantly, the constituency would remain unrepresented in the Assembly. It would also impact the democratic setup as a whole by permitting the thin majority Government (coalition Government) of the day to manipulate the numbers of the Opposition Party in the House in an undemocratic manner. Not only that, the Opposition will not be able to effectively participate in the discussion/debate in the House owing to the constant fear of its members being suspended for longer period. There would be no purposeful or meaningful debates but one in terrorem and as per the whims of the majority. That would not be healthy for the democracy as a whole"

"Suffice it to observe that one¬year suspension is worse than "expulsion", "disqualification" or "resignation" — insofar as the right of the constituency to be represented before the House/Assembly is concerned. In that, long suspension is bound to affect the rights harsher than expulsion wherein a mid¬term election is held within the specified time in terms of Section 151A of the 1951 Act, not later than six months. Thus, the impugned resolution is unreasonable, irrational, and arbitrary and liable to be set aside"

"In case of suspension beyond the period of remainder of the Session or sixty days or six months, as the case may be, even though is not a case of disqualification incurred by the member, it would entail in undue deprivation of the constituency to be represented in the House by their duly elected representative. It is, therefore, a drastic measure trenching upon imposing penalty more than disciplinary or corrective measure, beyond the limited inherent powers of the House".

Power of Legislature not absolute

Senior Advocate Aryama Sundaram, appearing for the State of Maharashtra, had essentially argued that judicial review as not permissible over the proceedings inside the house. He also submitted that Article 190(4) was not mandatory and was only discretionary, and it applied to a situation where a member was absent for a period in excess of 60 days without leave. He argued that the said provision was not attracted in a case of suspension.

Referring to the Constitution Bench judgment in Raja Ram Pal case, the bench refuted the arguments of the State.  The Court observed that the inherent power of the Legislature is not absolute. The moment it is demonstrated that it is a case of infraction of any of the rights under Para III of the Constitution including ascribable to Articles 14 and 21 of the Constitution, the exercise of power by the Legislature would be rendered unconstitutional. The Court noted that the Raja Rampal decision has held that "The (legislative)proceedings which may be tainted on account of substantive or gross illegality or unconstitutionality are not protected from judicial scrutiny".