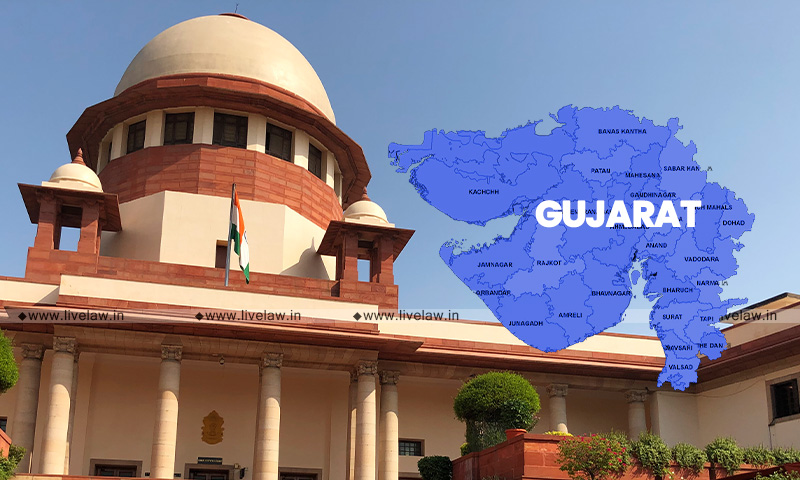 While hearing suo moto case regarding the incident in Rajkot, Gujarat on 26.11.2020, resulting in the death of Covid patients in the Covid Hospital, on Monday, the Supreme Court curious to know what the State of Gujarat's plan of action is, asked the State Government to file an affidavit providing updated position on plans.

"The State of Gujarat shall file an affidavit on the updated position of plan."

A Bench comprising Justices D.Y. Chandrachud and Hima Kohli was apprised that the Inquiry Commission headed by Justice DA Mehta, set up by the Gujarat Government to ascertain whether the said incident at Shrey Hospital was a result of negligence or breach of duty on part of any authority has turned in its report. It has also been filed before the Court in sealed cover. Considering the fact that the Commission was constituted under the Commission of Inquiry Act and its report ought to be placed before the Legislative Assembly, the Bench enquired if the same had been done by the State Government.

At the outset, Senior Advocate, Mr. Dushyant Dave appearing on behalf of the victims submitted -

"What will they get, pittance, 5 lakhs? Is that the loss of life? No safety measures available in these hospitals. Hospitals are in residential areas. These are serious offences, culpable homicide not amounting to murdr is clearly attracted."

"No doubt we need hospitals. but there should be a demarcation between residential, commercial and industrial areas."

The Counsel for an intervenor apprised the Bench that on 17th October, 2022, the State of Gujarat has come up with an Ordinance to regularise unauthorised constructions.

Disappointed in the manner the authorised constructions are to be legitimised in the State of Gujarat pursuant to the Ordinance, Mr. Dave remarked -

"How do you regularise unauthorised construction? This is a fraud on the constitution. These illegal constructions are a blessing of the municipal and police authorities, who collected large sums of money, no action against them, citizens paid the price, and now these are to be regularised."

Justice Chandrachud stated that in a suo moto proceeding, the Apex Court might not be in a position to deal with the legitimacy of the Ordinance. He asked the Senior Counsel to provide a short note with the key issues, so that the Court can ascertain the parameters wherein its intervention is required.

Agreeing to do so, right off the bat, Mr. Dave pointed out two key issues that would require the consideration of the Apex Court -

On the last occasion, the Apex Court had noted that on July 8, the Gujarat government had issued a notification that directed that no coercive action should be taken against the buildings having no BU permission till three months from December 31, 2021, which is the last date of applicability of the Gujarat Epidemic Diseases COVID-19 Regulation, 2020. While confronting the State of Gujarat on its decision to issue notification extending the timeline for hospitals to rectify compliances, the Supreme Court had on July 19 decided to consider if the notification was in breach of its order dated December 18, 2020 regarding maintenance and audit of fire safety measures in hospitals.

Reportedly, the Gujarat government on July 23 issued a second order, clarifying that the July 8 order only pertained to compliance with Gujarat Town Planning and Urban Development Act and not the Gujarat Fire Prevention and Life Safety Measures Act, further stating that for any premise non-compliant with the latter, competent authorities "shall continue to take all actions, including coercive actions…"

The Court then had observed -

The said Section 122 states that every appropriate authority under the Town Planning Act shall carry out such directions or instructions as may be issued from time to time by the State Government for the efficient administration of the Act.

On December 18, 2020 three specific directions were issued by the Court regarding maintenance and audit of fire safety measures in hospitals :

a. All States/UTs were directed to appoint one nodal officer for each covid hospital, to be made responsible for ensuring the compliance of all fire safety measures.

b. In each district, State Government was to constitute a committee to carry out a fire audit atleast once a month and inform the deficiency to management of the hospital and report to the Government for taking follow-up action.

c. The Covid hospital that had not obtained NOC from the fire department was immediately required to apply for NOC. In the event Covid Hospital was found not having NOC or not having obtained renewal; appropriate action was to be taken by the State

The Bench had observed on 19th July that,

"During the course of the hearing, it has transpired that on 8 July 2021, a Notification has been issued by the State Government, by which an extended timeline has been issued for rectifying compliances for a period of three months commencing from the last date of the applicability of the Gujarat Epidemic Diseases Regulations 2020. The Court has been informed that the last date being 31 March 2022, the extended period of three months would commence thereafter. The issue whether the Notification has been issued in breach of the directions which were issued by this Court would merit being considered. Before we consider the matter any further, we are of the view that this aspect should be explained on affidavit by the State of Gujarat".

The State of Gujarat was also required to file before this Court a comprehensive statement indicating (i) the audits which were conducted in pursuance of the order dated December 18, 2020; and (ii) the result of the audits specifically in terms of which hospitals were found not to be in compliance with the safety and other norms under the Development Control Regulations.

[Case Title: In re proper treatment of covid 19 patients & dignified handling of dead bodies in the hospitals etc SMW(C) No. 7/2020 PIL]