AP (Telangana Area) Tenancy and Agricultural Lands Act- After Grant Of Ownership Certificate In Terms Of Section 38­E Protected Tenants Are Deemed To Be Owners: SC 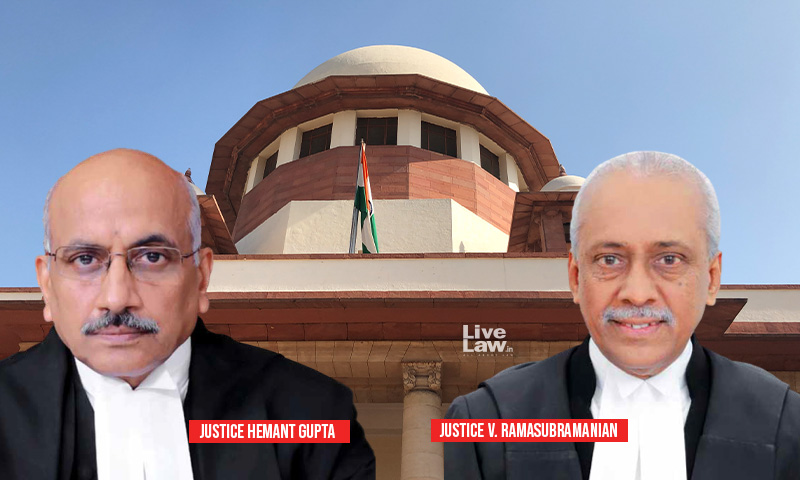 The Supreme Court recently upheld the view taken by the Telangana High Court in which the High Court had observed that after the grant of ownership certificate in terms of Section 38­E of the Tenancy Act, the protected tenants are deemed to be owners.It was also observed that once the protected tenants were deemed to be owners, there could not be any occupancy rights certificate as...

The Supreme Court recently upheld the view taken by the Telangana High Court in which the High Court had observed that after the grant of ownership certificate in terms of Section 38­E of the Tenancy Act, the protected tenants are deemed to be owners.

It was also observed that once the protected tenants were deemed to be owners, there could not be any occupancy rights certificate as the purchasers were divested of their ownership by virtue of the grant of ownership certificate under Section 38­E of Andhra Pradesh (Telangana Area) Tenancy and Agricultural Lands Act, 1950.

The bench of Justices Hemant Gupta and V Ramasubramanian was considering a special leave petition assailing Telangana High Court's order in which the High Court had granted an interim order of injunction in favour of the respondent.

The High Court had observed that,

The Supreme Court in P Satyanarayana v. Nandyala Rama Krishna Reddy while dismissing the appeal, upheld the view taken by the High Court.

"But we are not impressed with the said submission. We have already extracted paragraph 52 of the Order of the High Court which records reasons as to why the High Court thought that the previous proceeding will not be an impediment in the way of the respondent­ plaintiff filing the present suit and seeking an injunction. As rightly observed by the High Court, the dismissal of the application for injunction in the prior suit, was on account of the fact that the photographs showed the land to be an open vacant land.

In view of the above, we are of the considered opinion that the impugned order of the High Court does not warrant any interference under Article 136 of the Constitution," Supreme Court observed.

The respondent ( Nandyala Rama Krishna Reddy) had filed a suit before the trial court for declaring that he is the absolute owner in possession and enjoyment of the suit schedule property and that the Gift Settlement Deed dated July 24, 1987 executed in favour of P Satyanarayana was null and void. He had also sought a relief of permanent injunction restraining the petitioner from interfering with his possession and enjoyment.

In his suit before the Trial Court, the respondent averred that he purchased an agricultural dry land under a registered sale deed dated December 9, 2015 from Mekala Ram Reddy ("vendor") who had purchased the suit property under a registered sale deed dated November 25, 2008 from one Pannala Ram Reddy. He further stated that after the purchase, he got the revenue records mutated in his name. When he started constructing a compound wall and a room in the suit property in January 2016, the petitioner attempted to interfere, forcing him to lodge a police complaint. In his suit, the respondent also stated that since the police did not take any action, the petitioner­ came to the spot on January 8, 2016 and tried to demolish the compound wall. Even the petitioner lodged a police complaint admitting the construction of compound wall by the respondent and after he perused the complaint, he got to know that the petitioner was claiming title by virtue of a Gift Settlement Deed dated July 24, 1987. Since after the enquiries made with the Tehsildar's office, the respondent got to know that the petitioner was in possession of the land in Survey No.272/AA and not Survey No.272/A, he approached the Trial Court.

While the suit was pending, Nandyala Rama Krishna Reddy moved an interlocutory application for an interim order of injunction restraining P Satyanarayana from interfering with his peaceful enjoyment and possession of the suit property.

The petitioner in his written statement stated that respondent's vendor, Mekala Ram Reddy had earlier instituted a suit in 2015 seeking a decree of permanent injunction which was dismissed on August 11, 2015. He further stated that Reddy under a registered Sale Deed dated December 9, 2015 sold the property to respondent and after the sale the vendor withdrew his suit as not pressed on March 2, 2016. It was also his contention that he got the property under a Gift Settlement Deed dated July 24, 1987 and that all the subsequent sale transactions were not valid, any mutation in revenue records and the issuance of Pattadar passbook were of no consequence.

The trial Court on February 11, 2020 dismissed the application for injunction on the grounds that:

The suit instituted by Mekala Ram Reddy was dismissed as withdrawn, after the dismissal of the interim application for injunction.

While dismissing the trial court had considered no case was made out by the respondent for grant of an interim injunction since there was nothing to show the sub­division of the land in Survey No.272.

Assailing the order of dismissal, the respondent approached the High Court by way of an appeal under Order XLIII, Rule 1 of the Code of Civil Procedure.

The High Court on June 2, 2021 allowed the appeal and granted an interim order of injunction in favour of the respondent, pending disposal of the suit. While allowing the same, the High Court noted that:

Respondent's predecessor was issued a certificate dated December 16, 1975 u/s Section 38­E of the Andhra Pradesh (Telangana Area) Tenancy and Agricultural Lands Act, 1950 which was proof enough to show the passing of title in favour of his predecessor.

Form 1­B (Record of Rights) showed that prima facie the respondent was in possession of the land on the date of institution of the suit therefore, the person in possession was entitled to an interim order of protection.

The High Court also found the Occupancy Right Certificate issued on April 8, 1996 08.04.1996, to be unbelievable, as the predecessor in title of the respondent had already been issued a certificate under Section 38­E of the aforesaid Act way back on December 16, 1975. It was also pointed out that the person under whom the petitioner claimed title, namely Gopamma Yadaiah, could not have acquired any right, under the sale deed dated July 8, 1980, after the issue of the certificate under Section 38­E of the Act in favour of respondent's predecessor on December 16, 1975.

Senior Advocate Shyam Divan appearing for the petitioner relied on the Top Court's order dated August 2, 2021 in which the Court had recorded the argument that the withdrawal of the prior suit by the vendor of the respondent ­plaintiff would have a serious bearing upon the prayer for interim injunction in the present suit. Based on the same, Senior Counsel contended that the respondent­/plaintiff was a purchaser pendente lite and that when his suit itself was barred by law, he could not be rewarded with an interim injunction.