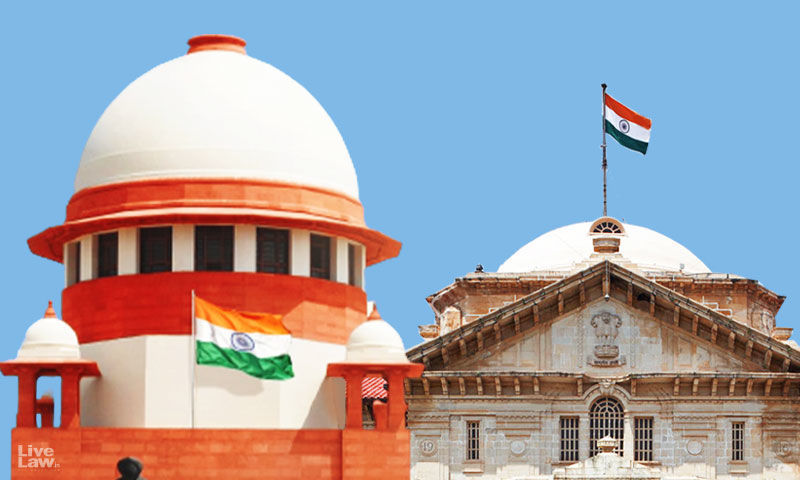 The Supreme Court, on Tuesday, agreed to decide the plea of the Uttar Pradesh Government challenging the order of the Division Bench of the Allahabad High Court, which had, in essence, affirmed the Single Judge's direction to the the Government to take necessary steps to approve the Allahabad High Court Officers and Staff (Conditions of Service and Conduct) (Amendment) Rules, 2005 framed...

The Supreme Court, on Tuesday, agreed to decide the plea of the Uttar Pradesh Government challenging the order of the Division Bench of the Allahabad High Court, which had, in essence, affirmed the Single Judge's direction to the the Government to take necessary steps to approve the Allahabad High Court Officers and Staff (Conditions of Service and Conduct) (Amendment) Rules, 2005 framed by the Chief Justice of the High Court under Article 229(2) of the Constitution for enhancing the pay-scales of Class IV employees of the High Court to that of their counterparts in the Delhi High Court, on merits.

On a previous occasion (28.01.2019), as per the request of the parties, the Court had granted time to convene a meeting between the Chief Justice of Allahabad High Court and the Chief Minister of U.P., as also predicated in the impugned order. But, on Tuesday, a Bench comprising Justices A.M. Khanwilkar and J.B. Pardiwala was apprised that it would not be possible for the State Government to accept the amendments made by the Chief Justice, considering the financial implication of the same across the State. In view of the same, the Bench thought it fit to hear the matter on merits.

Justice Khanwilkar was of the opinion that the High Court cannot decide the salary of its employees, it can only make suggestions to the Government.

On the issue of parity of salary, he noted -

"How can you equate someone working in Taluka Court with a person working in District Court in Delhi. It is that principle will come into play - can unequals be treated equally?"

On 26.07.2012, the U.P. Government had declined to grant approval to the Allahabad High Court Officers and Staff (Conditions of Service and Conduct) (Amendment) Rules, 2005. The same was challenged before the High Court by its Class IV Employees' Association. The Single Judge quashed the State Government's order and directed it to take appropriate steps to approve the amendments within six weeks. It was also directed that Class IV employees of the High Court would be entitled to higher pay-scales from the date the amendments were incorporated in the Rules and the arrears of difference of salary would be paid to them within six months from the date the Rules are approved.

The State approached the Division Bench impugning the Single Judge's order on the grounds of financial implication, and adverse effect on other employees. Referring to a catena of judgments of the Apex Court, the Division Bench observed that absolute control over its staff has been vested in the High Court free from interference of the Government, subject to the limitations imposed by Article 229(2) of the Constitution. It further added that the Supreme Court while considering the scope of Article 146 and Article 229 of the Constitution had recognised that it is a legislative power conferred upon the Chief Justice. Thus, the recommendations of the Chief Justice should not be rejected except on the cogent and sufficient reason. The Division Bench noted -

In 1997, the Class IV Employees' Association had filed writ petition for a direction to the State Government to grant pay-scales of Rs.975-1660 and Rs.1000-1750 in place of Rs.750-940 and Rs.775-1025 respectively to Class IV employees of the High Court. This petition was allowed on 06.02.1998. In appeal, the Division Bench set aside the order, but it was left open to the Chief Justice of the High Court to take a decision regarding grant of higher pay-scales. This order was assailed by the Association before the Apex Court, which noted that Chief Justice of the High Court can constitute a Committee whose recommendation can be considered by the State Government in terms of the observation in the judgment. On 28.11.2004, the Chief Justice of the High Court constituted a Committee of four Judges. On 23.12.2004, the Committee endorsed granting higher pay-scales. The Committee found that the Class-IV employees perform important duties and contribute to the smooth functioning of the Court. Apart from performing public duties of dispensation of justice they also perform onerous duties without any complaint and keeping longer hours without any special allowances. It also found that Class-IV employees perform different nature of duties and are required to work for longer hours not only in the High Court but at the residence of the Hon'ble Judges. The Committee came to the conclusion that these employees of the High Court are performing no less onerous and arduous duties as their counterparts in the Delhi High Court.

The recommendations were approved by the Chief Justice on 24.12.2004. Official intimation was sent out to the State Government to take necessary steps. The Allahabad High Court Officers and Staff (Conditions of Service and Conduct) Rules, 1976 were also amended in accordance with the recommendations. The Schedule to the Amendment Rules fixes the pay scales. It provides that Class IV employees holding promotional and technical posts will be placed in the pay-scale of Rs.3200-4900 and other Class IV employees holding non-technical posts will be placed in the pay-scale of Rs.3050-4590. These Amendment rules were also sent to the concerned Govt. department for approval. By an order dated 28.02.2007, the State Government declined to grant approval to the amendments. The Govt. order was eventually challenged and was allowed. The High Court passed direction to the State to place the draft Amendment Rules framed by the Chief Justice of the High Court under Article 229(2) of the Constitution before the Governor of the State for granting approval. Review applications and special appeals filed by the State were rejected. While the special appeal was pending, the order dated 26.07.2012, which had been impugned in this round of litigation before the High Court, was passed.