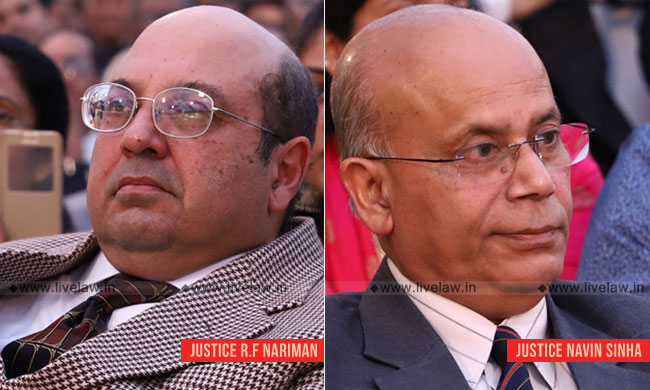 The Supreme Court today upheld the constitutional validity of the Insolvency and Bankruptcy Code 2016 in its "entirety".The Court however held that to attract the bar under Section 29A from participating in resolution process, "related person" should be a person connected to the defaulting entity.The bench of Justices R F Nariman and Navin Sinha had reserved orders on January 15 on the...

The Supreme Court today upheld the constitutional validity of the Insolvency and Bankruptcy Code 2016 in its "entirety".

The Court however held that to attract the bar under Section 29A from participating in resolution process, "related person" should be a person connected to the defaulting entity.

The bench of Justices R F Nariman and Navin Sinha had reserved orders on January 15 on the petitions challenging the validity of IBC.

The bunch of petitions were moved primarily contending that IBC was discriminatory and unfair to operational creditors as compared to financial creditors.

The apex court had transferred to it similar petitions filed in various High Courts.

During the hearing, Justice Nariman had expressed the need to have circuit benches of NCLAT in metros.

From the batch of petitions challenging IBC, the bench had split up the petitions challenging the circular issued by RBI on February 12, which had directed lenders to initiate IBC proceedings against defaulters in the sectors of power, steel and textiles.Private power companies  challenged the  circular saying it is ultra vires the RBI Act as it affected banks' discretion to decide on the action against non performing assets. The Court said that challenge to RBI Circular will be dealt with separately.

Summary of the Judgment

The court held that financial creditors are clearly different from operational creditors and therefore, there is obviously an intelligible differentia between the two which has a direct relation to the objects sought to be achieved by the Code. The court made following observations regarding this

Referring to the code, the bench explained the difference between Financial Creditor and operational Creditor. It said: "A perusal of the definition of financial creditor and financial debt makes it clear that a financial debt is a debt together with interest, if any, which is disbursed against the consideration for time value of money. It may further be money that is borrowed or raised in any of the manners prescribed in Section 5(8) or otherwise, as Section 5(8) is an inclusive definition. On the other hand, and 'operational debt' would include a claim in respect of the provision of goods or services, including employment, or a debt in respect of payment of dues arising under any law and payable to the Government or any local authority."

The court made following observations regarding Intelligible Differentia:

While upholding this section, the bench said: "The main thrust against the provision of Section 12A is the fact that ninety per cent of the committee of creditors has to allow withdrawal. This high threshold has been explained in the ILC Report as all financial creditors have to put their heads together to allow such withdrawal as, ordinarily, an omnibus settlement involving all creditors ought, ideally, to be entered into. This explains why ninety per cent, which is substantially all the financial creditors, have to grant their approval to an individual withdrawal or settlement. In any case, the figure of ninety per cent, in the absence of anything further to show that it is arbitrary, must pertain to the domain of legislative policy, which has been explained by the Report (supra). Also, it is clear, that under Section 60 of the Code, the committee of creditors do not have the last word on the subject. If the committee of creditors arbitrarily 102 rejects a just settlement and/or withdrawal claim, the NCLT, and thereafter, the NCLAT can always set aside such decision under Section 60 of the Code. For all these reasons, we are of the view that Section 12A also passes constitutional muster."

Resolution professional has no adjudicatory powers.

The challenge against Section 29A of the Code, which deals with eligibility of persons to be a resolution applicant, has been dealt with elaborately in this judgment. The bench referred to the judgment in ArcelorMittal, in which it had held that resolution applicants have no vested right to be considered as such in the resolution process.

Rejecting this argument, the bench said that this ineligibility is not restricted to malfeasance. It said: "Even the categories of persons who are ineligible under Section 29A, which includes persons who are malfeasant, or persons who have fallen foul of the law in some way, and persons who are unable to pay their debts in the grace period allowed, are further, by this proviso, interdicted from purchasing assets of the corporate debtor whose debts they have either wilfully not paid or have been unable to pay. The legislative purpose which permeates Section 29A continues to permeate the Section when it applies not merely to resolution applicants, but to liquidation also. Consequently, this plea is also rejected."

The court also observed that the one-year period in section 29A(c) cannot be faulted with as it is a policy matter decided by the RBI.

The judgment only makes some intervention in the interpretation of Section 29A(j) which defines 'related party'. The court dealt with the contention that, mere fact that somebody happens to be a relative of an ineligible person cannot be good enough to oust such person from becoming a resolution applicant, if he is otherwise qualified.

The court held that, in the absence of showing that such a 'related person' is connected with the business of the activity of the resolution applicant, such person cannot possibly be disqualified under Section 29A(j).

The bench also observed that the rationale for excluding such industries from the eligibility criteria laid down in Section 29A(c) and 29A(h) is because qua such industries, other resolution applicants may not be forthcoming, which then will inevitably lead not to resolution, but to liquidation.

Section 53 not violative of Article 14

Another contention made, while challenging Section 53, was that, in the event of liquidation, operational creditors will never get anything as they rank below all other creditors, including other unsecured creditors who happen to be financial creditors