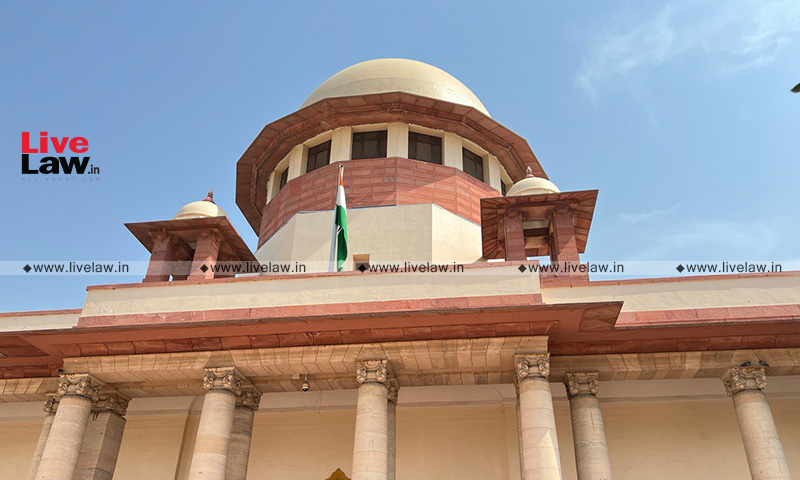 The Supreme Court, on Wednesday, upheld the provisions of the Prevention of Money Laundering Act, 2002 which relate to the power of arrest, attachment and search and seizure conferred on the Enforcement Directorate.Read the Summary of 545 Pages Judgement in Vijay Madanlal Choudhary Vs Union of India here;(i) The question as to whether some of the amendments to the Prevention of...

The Supreme Court, on Wednesday, upheld the provisions of the Prevention of Money Laundering Act, 2002 which relate to the power of arrest, attachment and search and seizure conferred on the Enforcement Directorate.

Read the Summary of 545 Pages Judgement in Vijay Madanlal Choudhary Vs Union of India here;

(i) The question as to whether some of the amendments to the Prevention of Money-laundering Act, 2002 could not have been enacted by the Parliament by way of a Finance Act has not been examined in this judgment. The same is left open for being examined along with or after the decision of the Larger Bench (seven Judges) of this Court in the case of Rojer Mathew

(ii) The expression "proceedings" occurring in Clause (na) of Section 2(1) of the 2002 Act is contextual and is required to be given expansive meaning to include inquiry procedure followed by the Authorities of ED, the Adjudicating Authority, and the Special Court.

(iii) The expression "investigation" in Clause (na) of Section 2(1) of the 2002 Act does not limit itself to the matter of investigation concerning the offence under the Act and is interchangeable with the function of "inquiry" to be undertaken by the Authorities under the Act.

(iv) The Explanation inserted to Clause (u) of Section 2(1) of the 2002 Act does not travel beyond the main provision predicating tracking and reaching upto the property derived or obtained directly or indirectly as a result of criminal activity relating to a scheduled offence.

(v) (a) Section 3 of the 2002 Act has a wider reach and captures every process and activity, direct or indirect, in dealing with the proceeds of crime and is not limited to the happening of the final act of integration of tainted property in the formal economy. The Explanation inserted to Section 3 by way of amendment of 2019 does not expand the purport of Section 3 but is only clarificatory in 533 nature. It clarifies the word "and" preceding the expression projecting or claiming as "or"; and being a clarificatory amendment, it would make no difference even if it is introduced by way of Finance Act or otherwise. (b) Independent of the above, we are clearly of the view that the expression "and" occurring in Section 3 has to be construed as "or", to give full play to the said provision so as to include "every" process or activity indulged into by anyone. Projecting or claiming the property as untainted property would constitute an offence of money-laundering on its own, being an independent process or activity. (c) The interpretation suggested by the petitioners, that only upon projecting or claiming the property in question as untainted property that the offence of Section 3 would be complete, stands rejected. (d) The offence under Section 3 of the 2002 Act is dependent on illegal gain of property as a result of criminal activity relating to a scheduled offence. It is concerning the process or activity connected with such property, which constitutes the offence of moneylaundering. The Authorities under the 2002 Act cannot prosecute any person on notional basis or on the assumption that a scheduled offence has been committed, unless it is so registered with the 534 jurisdictional police and/or pending enquiry/trial including by way of criminal complaint before the competent forum. If the person is finally discharged/acquitted of the scheduled offence or the criminal case against him is quashed by the Court of competent jurisdiction, there can be no offence of money-laundering against him or any one claiming such property being the property linked to stated scheduled offence through him.

(vi) Section 5 of the 2002 Act is constitutionally valid. It provides for a balancing arrangement to secure the interests of the person as also ensures that the proceeds of crime remain available to be dealt with in the manner provided by the 2002 Act. The procedural safeguards as delineated by us hereinabove are effective measures to protect the interests of person concerned.

(vii) The challenge to the validity of sub-section (4) of Section 8 of the 2002 Act is also rejected subject to Section 8 being invoked and operated in accordance with the meaning assigned to it hereinabove.

(viii) The challenge to deletion of proviso to sub-section (1) of Section 17 of the 2002 Act stands rejected. There are stringent safeguards provided in Section 17 and Rules framed thereunder. Moreover, the pre-condition in the proviso to Rule 3(2) of the 2005 Rules cannot be 535 read into Section 17 after its amendment. The Central Government may take necessary corrective steps to obviate confusion caused in that regard.

(ix) The challenge to deletion of proviso to sub-section (1) of Section 18 of the 2002 Act also stands rejected. There are similar safeguards provided in Section 18. We hold that the amended provision does not suffer from the vice of arbitrariness.

(x) The challenge to the constitutional validity of Section 19 of the 2002 Act is also rejected. There are stringent safeguards provided in Section 19. The provision does not suffer from the vice of arbitrariness.

(xi)Section 24 of the 2002 Act has reasonable nexus with the purposes and objects sought to be achieved by the 2002 Act and cannot be regarded as manifestly arbitrary or unconstitutional.

(xii) (a) The proviso in Clause (a) of sub-section (1) of Section 44 of the 2002 Act is to be regarded as directory in nature and this provision is also read down to mean that the Special Court may exercise judicial discretion on case-to-case basis. 536

(b) We do not find merit in the challenge to Section 44 being arbitrary or unconstitutional. However, the eventualities referred to in this section shall be dealt with by the Court concerned and by the Authority concerned in accordance with the interpretation given in this judgment.

xiii) (a) The reasons which weighed with this Court in Nikesh Tarachand Shah706 for declaring the twin conditions in Section 45(1) of the 2002 Act, as it stood at the relevant time, as unconstitutional in no way obliterated the provision from the statute book; and it was open to the Parliament to cure the defect noted by this Court so as to revive the same provision in the existing form. (b) We are unable to agree with the observations in Nikesh Tarachand Shah distinguishing the enunciation of the Constitution Bench decision in Kartar Singh708; and other observations suggestive of doubting the perception of Parliament in regard to the seriousness of the offence of money-laundering, including about it posing serious threat to the sovereignty and integrity of the country. (c) The provision in the form of Section 45 of the 2002 Act, as applicable post amendment of 2018, is reasonable and has direct nexus with the purposes and objects sought to be achieved by the 2002 Act and does not suffer from the vice of arbitrariness or unreasonableness. (d) As regards the prayer for grant of bail, irrespective of the nature of proceedings, including those under Section 438 of the 1973 Code or even upon invoking the jurisdiction of Constitutional Courts, the underlying principles and rigours of Section 45 may apply.

(xiv) The beneficial provision of Section 436A of the 1973 Code could be invoked by the accused arrested for offence punishable under the 2002 Act.

(xvi) Section 63 of the 2002 Act providing for punishment regarding false information or failure to give information does not suffer from any vice of arbitrariness.

(xvii) The inclusion or exclusion of any particular offence in the Schedule to the 2002 Act is a matter of legislative policy; and the nature or class of any predicate offence has no bearing on the validity of the Schedule or any prescription thereunder.

(xviii) (a) In view of special mechanism envisaged by the 2002 Act, ECIR cannot be equated with an FIR under the 1973 Code. ECIR is an internal document of the ED and the fact that FIR in respect of scheduled offence has not been recorded does not come in the way of the Authorities referred to in Section 48 to commence inquiry/investigation for initiating "civil action" of "provisional attachment" of property being proceeds of crime. 539 (b) Supply of a copy of ECIR in every case to the person concerned is not mandatory, it is enough if ED at the time of arrest, discloses the grounds of such arrest. (c) However, when the arrested person is produced before the Special Court, it is open to the Special Court to look into the relevant records presented by the authorised representative of ED for answering the issue of need for his/her continued detention in connection with the offence of money-laundering.

(xix) Even when ED manual is not to be published being an internal departmental document issued for the guidance of the Authorities (ED officials), the department ought to explore the desirability of placing information on its website which may broadly outline the scope of the authority of the functionaries under the Act and measures to be adopted by them as also the options/remedies available to the person concerned before the Authority and before the Special Court.

(xx) The petitioners are justified in expressing serious concern bordering on causing injustice owing to the vacancies in the Appellate Tribunal. We deem it necessary to impress upon the executive to take corrective measures in this regard expeditiously.

(xxi) The argument about the proportionality of punishment with reference to the nature of scheduled offence is wholly unfounded and stands rejected.