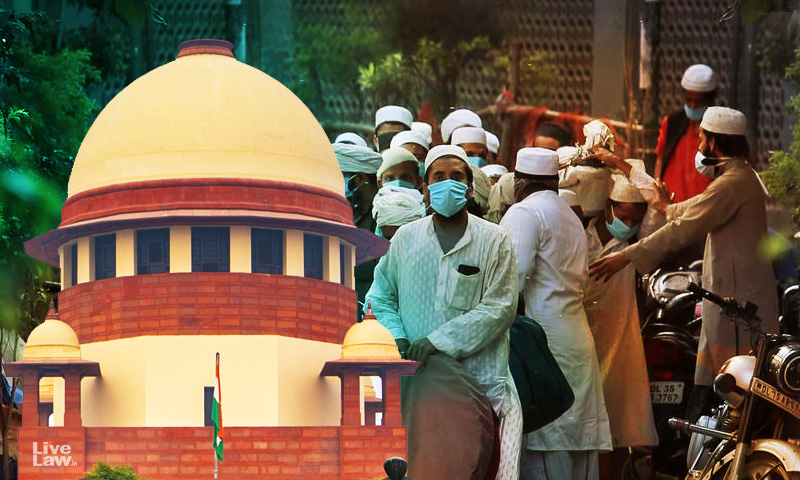 The Supreme Court on Thursday allowed foreign citizens, who are facing criminal proceedings in Delhi for participating in the Tablighi Jamaat congregation at Nizamuddin Markaz during March allegedly in violation of visa conditions, to submit representations before the nodal officer proposed by the Central Government seeking permission to go back to their country of origin.A bench headed...

The Supreme Court on Thursday allowed foreign citizens, who are facing criminal proceedings in Delhi for participating in the Tablighi Jamaat congregation at Nizamuddin Markaz during March allegedly in violation of visa conditions, to submit representations before the nodal officer proposed by the Central Government seeking permission to go back to their country of origin.

A bench headed by Justice A M Khanwilkar ordered that such representations should be decided, preferably within a period of four days, but not later than a week from their receipt.

The ASG told the bench that 8 of such foreigners were discharged by the trial court, and revision petitions have been filed against the order of discharge.

The Court said that the discharged persons are at liberty to file applications seeking a return to the country of origin subject to giving undertaking and security before the trial court.

"At the last hearing, 8 names were mentioned. They are ones who didn't opt for plea bargaining and wanted a trial instead. For those who went for plea-bargaining, the matter is over. They can go. Ultimately, the others were also discharged. They can go back to their countries of origin subject to giving an undertaking and security or other assurance", informed ASG K. M. Natarajan when the case was taken up.

"So let that be done before the relevant courts. Take the undertaking and let them go. There should be no difficulty in that", said Justice A. M. Khanwilkar.
"Out of the 44 foreign nationals tried, 8 have been fully discharged. Others have been discharged under section 14 of the Foreigners' Act while the lesser charges continue", submitted Senior Counsel C. U. Singh for the petitioner.
"The ASG says revision petitions for these 8 have been filed...You may also move an application before the revision court and subject to an undertaking to abide by any directions, you may be permitted to go", said Justice Khanwilkar.
"Also, where no charges are remaining, some facilitation will be needed. On August 6, the SG had assured that the look-out notices will be withdrawn and their return to the countries of origin will be facilitated...if Your Lordships could record this?", asked Mr. Singh.
"A general observation would not be helpful. Give us a list of persons who have been fully discharged or acquitted and against whom nothing is pending and we will ask the Solicitor to have their names cleared from the relevant department", said Justice Khanwilkar.
"Also, could Your Lordships direct courts to dispose off the revisions? This lingering thing is affecting the rights of these people. Some finality is needed", pressed Mr. Singh.
Turning to the ASG, Justice Khanwilkar asked, "Could you identify a nodal authority? We can give a general direction that individual representations could be made to the officer/office concerned, to be processed within a definite timeline and the decision to be communicated after obtaining directions from the appropriate quarters within 3-4 working days. If multiple departments are involved, then no later than 1 week"
Even as Mr. Singh suggested that the Immigration Bureau could be so designated, the ASG sought a pass-over to be able to get back to the court on this account.
Then, Senior Advocate Maneka Guruswamy made submissions in connection with the state of Bihar and UP- "On September1 , vis-a-vis Bihar , Your Lordships had said that the HC would designate a Fast Track Court and had required the state of Bihar to file an application. Could you please expedite that process? The state didn't file the application, we did. The matter is still to be heard. Your Lordships had on September 1 said that these trials be completed in 8 weeks. However, nothing has even commenced...those individuals are still waiting...it's been a month and half"
"This is not a normal situation. There may be logistical problems before the HC also. Sitting here, we can't visualise the reason why the HC is not listing it. We can't go till that extent. We are told the HC is to hear it today or tomorrow. We'll wait. If nothing is done even upon the re-opening of the court after the Dussehra break, we'll see. Unless Bihar state has a proposal?", observed Justice Khanwilkar, asking the counsel for the state if the government has a proposal for settlement.
The counsel for the state of Bihar informed the bench that the matter was listed before the HC yesterday and the trial has been consolidated and transferred to Patna. As Ms. Guruswamy conceded that she was not aware of this development, Justice Khanwilkar noted that the top court will now wait.
The bench also noted that a similar consolidation order has also been passed by the Allahabad HC for the state of UP.
"We hope and trust that the concerned authorities will ensure the transmission of records to the designated courts and the trials will be completed expeditiously", expressed the bench.
At this point, the ASG also informed the bench that Mr. Joy Thirkey, Joint Commissioner of Police, Delhi could be the nodal officer. The bench required him to convey his correct name, designation and address in writing to the court.
The bench directed that all revision petitions be disposed off expeditiously, subject to undertaking and other conditions, and that the concerned departments of the UOI to have no other objections to their travelling back to their countries of origin.
Further, it required that all other foreign nationals may make representations to the aforesaid officer, who will have the responsibility of processing the same in 4 days, and not later than 1 week, in any case, subject to the fulfillment of such necessary conditions as may be applicable.
TagsTablighi Jamaat #Foreigners Act #Justice AM Khanwilkar
Next Story
Similar Posts
+ View more
Law Firms
+ More