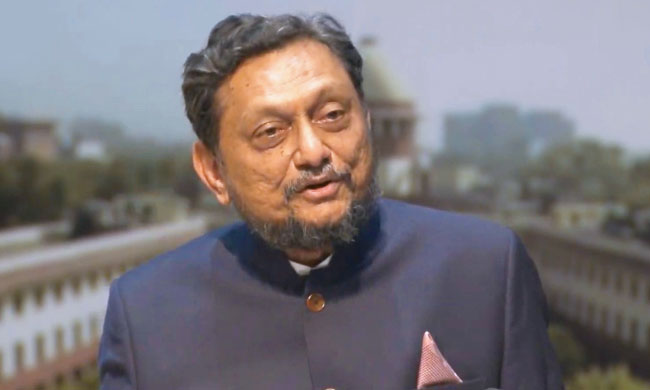 As Chief Justice of India Sharad Arvind Bobde began his address to mark the 70th Constitution Day, he reminded the august gathering about the vision of the constituent assembly: to have a free society where power will come from the people.He started his address by a quote from Dakshayani Velayudhan, the only Dalit woman and the youngest member of the constituent assembly, who said said that...

As Chief Justice of India Sharad Arvind Bobde began his address to mark the 70th Constitution Day, he reminded the august gathering about the vision of the constituent assembly: to have a free society where power will come from the people.

Embarking upon this idea of 'constitutional way of life', CJI highlighted that the constitution is not just a document to conduct the affairs of the state, but it's a framework of life for all the citizens.

CJI also acknowledged the fact that despite many challenges in the past, we're still celebrating the constitutional culture which has survived 70 years.

During the course of his address, there are two themes that evidently appeared as the clear agenda that the CJI wanted to focus on: Accessibility to Justice and Subordinate Judiciary

The major focus in the issue of accessibility of justice appeared to be on the language of the judgements. CJI noted that having the judgments being translated to vernaculars, would make justice more accessible to litigants and also to some lawyers.

Therefore, CJI introduced an AI Powered Focused Translation Engine, to address the language barrier between the litigants and the courts. However, the Court will continue to use human translators to validate the results of AI translation tools.

However, he did emphasize upon the irreplaceable position of the judges in the justice delivery system. He said:

'Role of a judge is paramount. While technology may aid a judge, it can't substitute a judge… machines are not substitutes to the knowledge of judges. Law functions in a unique environment which judges and lawyers are best equipped to navigate. We're not going to provide a system where an appeal goes from 1 computer to 3 computers.'

While addressing the issue of large pendency of cases, CJI pointed out that we need to free up the time and mind space of judges to efficiently adjudicate complex cases that require greater time for consideration and application of mind.

CJI also addressed the issues that are being faced by the subordinate courts across the country. He said that he's alarmed by the state of infrastructure and finances provided to subordinate judiciary.

He went on to highlight that it is appalling to see subordinate courts still facing accessibility problems, especially with respect to women, senior citizens and persons with disabilities. The need to have properly functioning display boards was also highlighted.

CJI assured that all these concerns will be seriously considered and the work will be done to eradicate them.

After sending across a ripple of hope for the coming decade, CJI Bobde concluded his speech by acknowledging the vision of Mahatma Gandhi. He said, till the time we reach the point where not a single person is facing a barrier to justice, our work will continue to carry on.