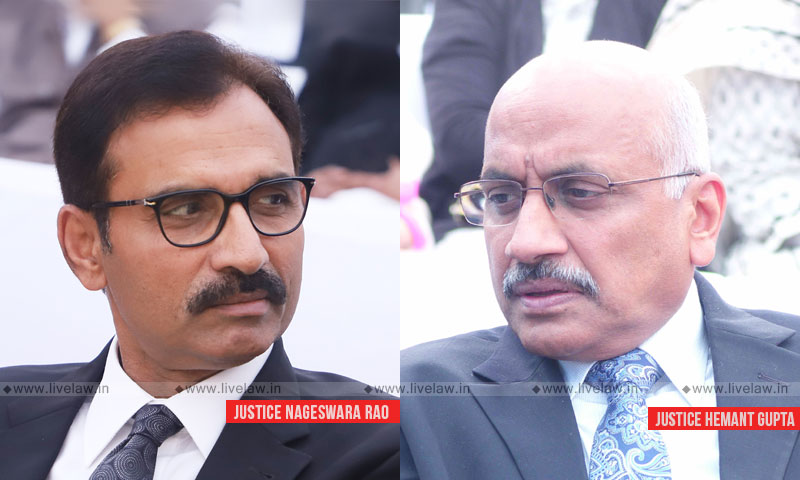 The Supreme Court has directed a medical college in Telangana to pay Rupees Ten Lakh as compensation to a PG Medical Course aspirant for illegally denying admission in the college.The bench comprising Justice L. Nageswara Rao and Hemant Gupta also observed that one seat in MS (General Surgery) course from the Management Quota of Kamineni Academy of Medical Sciences and Research Centre for...

The Supreme Court has directed a medical college in Telangana to pay Rupees Ten Lakh as compensation to a PG Medical Course aspirant for illegally denying admission in the college.

The bench comprising Justice L. Nageswara Rao and Hemant Gupta also observed that one seat in MS (General Surgery) course from the Management Quota of Kamineni Academy of Medical Sciences and Research Centre for the next academic year (2021-22) shall be granted to Mothukuru Sriyah Koumudi.

Koumudi had secured All India Rank-93563 with 327 marks in the NEET examination for admission into Post Graduation Medical Course. She was called for counselling and was given provisional admission to the MS (General Surgery) course and was allotted to Kamineni Academy of Medical Sciences and Research Centre, Hyderabad under Management Quota. She was required to report before the Principal of the College by 04:00 PM on 30.07.2020. In the meanwhile, the last date for admission into PG Medical Courses was extended till 30.08.2020 pursuant to the directions issued Supreme Court. Although she made an attempt to meet the Chairman of the College on 07.08.2020, she was not permitted to meet him. Koumudi then approached the Telangana High Court aggrieved by the denial of admission. The High Court allowed the Writ Petition and directed the National Medical Commission/ Medical Council of India to create or sanction one seat in MS (General Surgery). A further direction was given to Kamineni Academy of Medical Sciences and Research Centre, Hyderabad to grant admission to the her in MS (General Surgery) course.

The National Medical Commission approached the Apex Court challenging this judgment of the High Court in as much as it directed creation of a seat for this academic year for granting admission to Koumudi. The court, while considering the appeal noted the following observations made in an earlier judgment in S. Krishna Sradha v. The State of Andhra Pradesh & Ors. The bench observed that the following directions issued in S. Krishna Sradha case (supra) can be made applicable to admission to Post Graduate Courses as well

(i) That in a case where candidate/student has approached the court at the earliest and without any delay and that the question is with respect to the admission in medical course all the efforts shall be made by the concerned court to dispose of the proceedings by giving priority and at the earliest.

(ii) Under exceptional circumstances, if the court finds that there is no fault attributable to the candidate and the candidate has pursued his/her legal right expeditiously without any delay and there is fault only on the part of the authorities and/or there is apparent breach of rules and regulations as well as related principles in the process of grant of admission which would violate the right of equality and equal treatment to the competing candidates and if the time schedule prescribed - 30th September, is over, to do the complete justice, the Court under exceptional circumstances and in rarest of rare cases direct the admission in the same year by directing to increase the seats, however, it should not be more than one or two seats and such admissions can be ordered within reasonable time, i.e., within one month from 30th September, i.e., cut off date and under no circumstances, the Court shall order any Admission in the same year beyond 30th October. However, it is observed that such relief can be  granted only in exceptional circumstances and in the rarest of rare cases. In case of such an eventuality, the Court may also pass an order cancelling the admission given to a candidate who is at the bottom of the merit list of the category who, if the admission would have been given to a more meritorious candidate who has been denied admission illegally, would not have got the admission, if the Court deems it fit and proper, however, after giving an opportunity of hearing to a student whose admission is sought to be cancelled.

(iii) In case the Court is of the opinion that no relief of admission can be granted to such a candidate in the very academic year and wherever it finds that the action of the authorities has been arbitrary and in breach of the rules and regulations or the prospectus affecting the rights of the students and that a candidate is found to be meritorious and such candidate/student has approached the court at the earliest and without any delay, the court can mould the relief and direct the admission to be granted to such a candidate in the next academic year by issuing appropriate directions by directing to increase in the number of seats as may be considered appropriate in the case and in case of such an eventuality and if it is found that the management   was at fault and wrongly denied the admission to the meritorious candidate, in that case, the Court may direct to reduce the number of seats in the management quota of that year, meaning thereby the student/students who was/were denied admission illegally to be accommodated in the next academic year out of the seats allotted in the management quota.

(iv) Grant of the compensation could be an additional remedy but not a substitute for restitutional remedies. Therefore, in an appropriate case the Court may award the compensation to such a meritorious candidate who for no fault of his/her has to lose one full academic year and who could not be granted any relief of admission in the same academic year.

As the last date for admissions for the present academic year was 30.08.2020, the Court said that it is not inclined to grant admission to Koumudi for this academic year by cancelling admission granted to another candidate. While disposing the appeal, the bench observed: