Though This Court An Ardent Supporter Of Transparency In Other Public Agencies, It is Not So As To Information Residing Within Itself: Bhushan Tells SC, Judgment Reserved 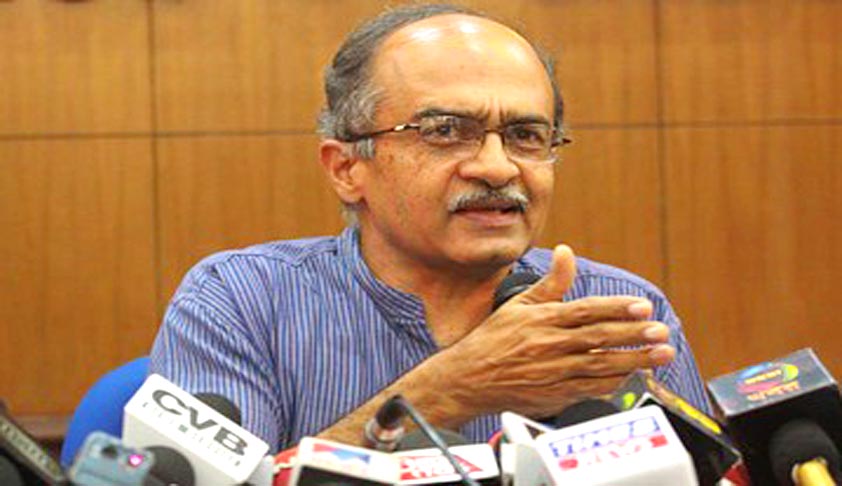 As the Supreme Court five-judge bench resumed hearing on Thursday on the court's own appeals against the judiciary being subject to the RTI regime, Chief Justice Ranjan Gogoi clarified that one of the contentious issues- the disclosure of the identity of the union minister who had in 2009 attempted to influence Justice R. Regupathy of the Madras High Court for a favourable judgment- was...

As the Supreme Court five-judge bench resumed hearing on Thursday on the court's own appeals against the judiciary being subject to the RTI regime, Chief Justice Ranjan Gogoi clarified that one of the contentious issues- the disclosure of the identity of the union minister who had in 2009 attempted to influence Justice R. Regupathy of the Madras High Court for a favourable judgment- was no longer alive.

Attorney General K. K. Venugopal (who appeared for the Central Public Information Officer of the apex court) had on Wednesday stressed on the seriousness of the matter, insisting that the names of the Union Minister and his advocate be revealed.

Further, he had favoured even the judges' declaration of their assets to be appropriately published, eventually leaving it to the court to decide the question.

So Advocate Prashant Bhushan, for the respondent, RTI activist Subhash Chandra Agarwal, addressed the court on why the correspondence between the highest functionaries in the Judiciary and the Executive pertaining to the supersession of relatively senior judges and the rejection of lawyers for elevation must also be placed in the public domain.

At the outset, Mr. Bhushan submitted that the court, being a judge in its own cause in the present matter, is acting as a court of necessity. The issue of transparency having been raised in context of the information which resides with the Supreme Court, it should not be hearing the case, but since there is no other court which could decide the matter, it acts as the court of necessity, he advanced.

He commenced his discourse referring to the 1975 State of UP v. Raj Narain where a constitution bench of this court had rejected the claim of privilege on the Blue Book on the security arrangements of the Prime Minister, observing that the people of this country are the real masters and they are entitled to know what their public servants are doing.

Next, he canvassed the 1981 S. P. Gupta case, where a 7-judge bench had dealt with the question of the disclosure of the communications between the Law Minister, the CJI and the Chief Justice of the Delhi High Court as to the non-elevation of two lawyers as permanent judges of the High Court who had earlier been appointed as additional judges. It was this decision which was heavily relied upon by the Central Information Commission in directing in 2009 the disclosure of the correspondence regarding the elevation of Justices R. M. Lodha, H. L. Dattu and A. P. Ganguly to the top court in supersession of Justices A. P. Shah, A. K. Patnaik and V. K. Gupta.

Describing the judgment as "idealistic", the AG had yesterday argued that the candour and the frankness of the Collegium members would be affected if they apprehended a subsequent disclosure of the reasons for their rejection of a proposed appointee. Besides, in view of the damage to the professional and family life of the appointee, he had warned of the independence of the judiciary being further sabotaged, which he had asserted had not been considered in S. P. Gupta.

Mr. Bhushan, in his turn, advanced that both these arguments had been dealt and rejected by the seven judges, who had held that public interest requires disclosure to avert nepotism ans arbitrariness in judicial appointments- "the IB had given a report on one of the proposed appointees that he was an alcoholic and that his nickname is 'boozer'. Can this information not be revealed?", the Counsel asked.

Moving on, Mr. Bhushan relied on RBI v. Jayantilal Mistry (2015), where, Coming down heavily on the RBI for withholding information under the RTI Act, the Supreme Court had declared that the RBI cannot place itself in a fiduciary relationship with the banks and other Financial institutions.

"In the CBSE case (of 2011 where the apex court had mandated that the CBSE supply the answer scripts of students under the RTI Act), it was held that the name of the examiner would not be revealed. Because if someone is giving away that detail, he is breaking the fiduciary relationship (between the examining body and the evaluator). Similarly, in the case a whistle blower has given information to the CVC with the stipulation to not reveal his name. Then what happens?", asked the judge.

Mr. Bhushan replied that this information would be exempted from disclosure under sub-clause (g) of section 8(1) of the RTI Act (as that the disclosure of which would endanger the life or physical safety of any person), and even sub-clause (e) (as information available to a person in his fiduciary relationship) as suggested by Justice Khanna.

"The true test is if you're providing the information in the trust and confidence of the person who is obligated to act in your interest- like in the case of lawyer-client, doctor-patient, company-in-house CA relationships. But a public servant, in the discharge of his public duty, is not acting for the benefit of anyone. So if he asks for his name to not be revealed, it cannot be so, unless the name is irrelevant. Say, Someone makes a recommendation for awarding a contract to so and so. Can then his name not be relevant?", continued the lawyer.

"The RBI is acting in its capacity of the regulator of banks. Not for the benefit of any bank. Similarly, the high functionaries carrying out the appointment of judges are not acting in a fiduciary manner", he proposed.

"The RBI governor writes a letter to a higher authority including a list of 16 bank defaulters, who are not just defaulters but fraudsters, and asks for them to be caught before they can run away. Not only nothing is done, but when the Parliamentary committee asks for this information from that higher authority, it is denied! That is how many people have managed to run away from the country!", contended Mr. Bhushan passionately.

"Your Lordships invited applications for the designation of senior advocates which were even put up on a public website. But in the case of prospective judges, AG had said that people will make absurd allegations, scurrilous and defamatory. That even applies to senior advocates. People will make allegations but if they are without substance, they can be thrown into the waste paper basket! If they are made without evidence, even on circumstance, then that would amount to defamation!", he urged.

In the light of the NJAC Act (which contemplated the involvement of the Law Minister and PM-nominees in judicial appointments) having been struck down, Mr. Bhushan expressed that the independence of the judiciary sought is from the executive and the Legislature, and not from accountability and the citizenry- "There is Nothing to say that sitting judges must select judges, but just that the executive must not. In the UK, there are independent bodies doing it by laying down the criteria, inviting applications and then scrutinizing them scientifically. There is transparency as to the reasons for selection. In the US, there is a confirmation hearing which is a totally public hearing!"

He contended that though the court has been an ardent supporter of openness and transparency in other public agencies, it has not been so forthcoming as to information residing within itself-

"For all other functionaries, there is one law on disclosure of even file notings as to selections, But judges inhabit a different universe!...When information was sought as to how many judgments have been reserved and for what length of time, both the CIC and the single judge of the High Court had said that this information should be disclosed. But the SC went to the division bench which then reversed it. The Appeal to the SC was also dismissed. Even that information is not being given! How should people then suggest reforms? The system then remains a black box which people can see but say nothing about for the fear of contempt and for the lack of information!"

The bench reserved its verdict on the issue on Thursday.