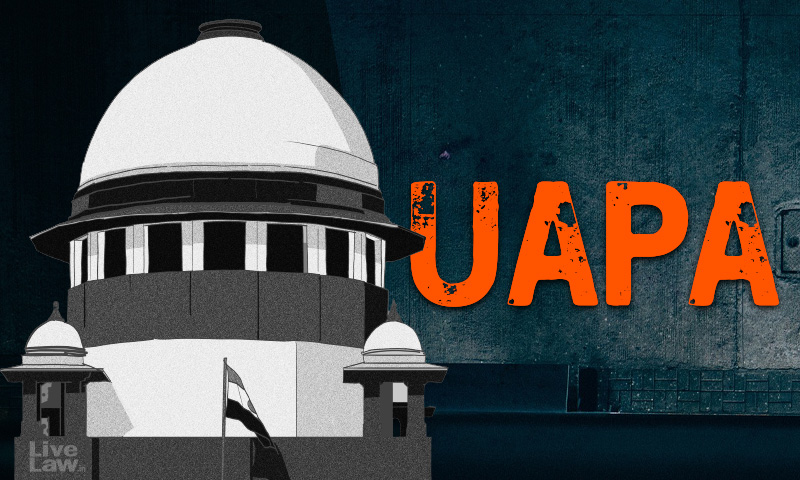 x
The petitioners, booked under UAPA over their comments on Tripura violence, argue that vague definitions allow police to target genuine criticism of government.

Two lawyers and a journalist recently booked with the draconian anti-terror law UAPA by Tripura Police have moved the Supreme Court seeking quashing of FIRs and challenging constitutional validity of several provisions of the Unlawful Activities Prevention Act.

The petitioners challenge the constitutional validity of Section 2(1)(o)(which defines "unlawful activity), Section 13(punishment for unlawful activity) and 43D(5) (restrictions on grant of bail) of the Unlawful Activities Prevention Act.

A Bench headed by the Chief Justice of India NV Ramana on Thursday  agreed to urgently list the matter after it was mentioned by Advocate Prashant Bhushan on behalf of the petitioners.

The petition has been filed by two lawyers Mr Mukesh and Mr Ansarul Haq Ansar and journalist Shyam Meera Singh booked with the UAPA by the Tripura Police over their social media posts about the recent communal violence which took place in the state.

While the two lawyers have been charged with UAPA for their fact finding report "Humanity Under Attack in Tripura #Muslim Lives Matter", journalist Shyam Meera Singh has been charged for tweeting "Tripura Is Burning"

The petitioners have stated that they moved the Supreme Court against the "targeted political violence against the muslim minorities" in the State of Tripura during the second half of October, 2021.

The plea has sought Court's directions against "invocation of UAPA by State of Tripura against Members of Civil Society including Advocates and Journalists who documented and spoke against targeted atrocities perpetrated on minorities of October 2021, so as to monopolise the flow of information from areas affected by violence by criminalising the very act of fact finding and reporting creates chilling effect on freedom of speech and expression."

"UAPA has been invoked against advocates to suppress a fact finding report titled as "Humanity Under Attack in Tripura #Muslim Lives Matter" as regards the violence and also journalists for merely tweeting "Tripura is burning"-which it was at the time when the tweet was made" the plea states.

The petitioners have contended that efforts by the State of Tripura was to monopolize the flow of information and facts emanating from the affected areas by invoking provisions of the Unlawful Activities (Prevention) Act, 1967, against members of civil society including advocates and journalists who have made the effort to bring facts in relation to the targeted violence in the public domain.

The petitioners have argued that if the State is allowed to criminalize the very act of fact finding and reporting, that too under the stringent provisions of the UAPA, then only facts that will come in the public domain are those that are convenient to the State.

Stressing on the fact that under UAPA provisions anticipatory bail is barred and the idea of bail is a remote possibility, the petitioners have called such criminalising a 'chilling effect' on the freedom of speech and expression of members of civil society.

"If the quest for truth and reporting thereof itself is criminalized then the victim in the process is the idea of justice." the petition reads.

Grounds For Challenge To Definition of 'unlawful activities':

The petitioners have argued that the definition of Unlawful Activities under UAPA prohibits an innocuous speech by threat of punishment and casts a 'wide net' on freedom of speech and expression:

According to the petitioners, the definition fails to define criminal offence with sufficient definiteness and is so 'vague' so as to make its application dependent solely on the discretion of police machinery.

"Ordinarily, neither the accused would be put on notice as to what exactly is the offence which has been committed nor would the authorities administering the section be clear as to on which side of the draw a particular speech/expression will fall."

Arguments By Petitioners For How These Impugned UAPA Provisions Have Chilling Effect On Freedom Of Speech & Expression?:

The petitioners have therefore pointed out the following reasons to support their stance that the impugned provisions of UAPA produce a 'chilling effect' on freedom of speech and expression and are violative of Articles 14, 19(1)(a) & 21 of the Constitution of India:

Challenge To Constitutional Validity of UAPA Pending Before Supreme Court:

The petition has cited the case of Sajal Awasthi v. Union of India, and Association For Protection of Civil Rights v. Union of India, where the constitutional validity of the Unlawful Activities (Prevention) Act, 1967 has been challenged. The matters are currently pending before a bench presided by the Chief Justice of India, in which notice was issues on these petitions.

Facts: Elaborating on the facts, the petition has stated that around 14th October, reports emerged from Bangladesh of violence against the Hindu minorities during the period of Durga Puja on allegations of blasphemy and in a perverse counterblast, political right wing forces in the State of Tripura started fomenting religious passions against the muslim minorities.

The plea has further stated that Processions by right wing political forces were led ostensibly to protest against the violence in Bangladesh but that led to violence against the muslim minorities in the State of Tripura.

The petitioner has further stated that a four member fact finding team of Advocates including two of the present Petitioners visited some of the affected regions in the State of Tripura and on the basis of their interaction with the persons affected by the violence they put in the public domain a fact finding report titled as "Humanity Under Attack in Tripura #Muslim Lives Matter", published by Lawyers for Democracy, in a press release at the Press Club of India.

The petition states that the FIR was registered one day after the report was made public, under sections of Indian Penal Code and Section 13 of Unlawful Activities Prevention Act, 1967, against "unknown persons". Section 41(a) notices were subsequently issued under Code of Criminal Procedure to the petitioner lawyers on the same date asking them to appear before the Tripura police

The petition has added that the third petitioner is a journalist by profession who on 27th October tweeted, "Tripura is burning" and was roped in the FIR.

(Case Title: Mukesh and others versus Union of India and others).