"Are We Not Humans? Have We Lost All Touch Of Humanity? Are We Living In A Police State?"Justice Deepak Gupta On Father Stan Swamy's Death, UAPA 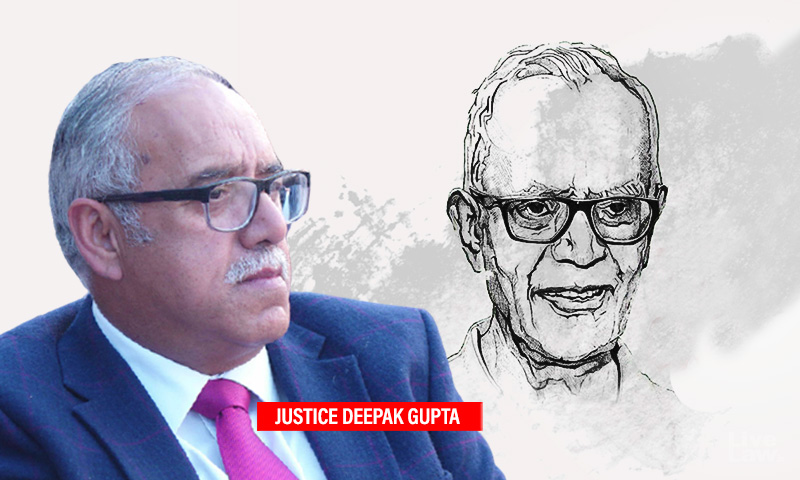 x
"UAPA (Unlawful Activities Prevention Act) should not remain in the statute book in the present form", said Justice Gupta

"The time has come that section 124A (of the IPC; on sedition) be held as unconstitutional", said Justice Deepak Gupta on Saturday. He also said that a law like the UAPA (Unlawful Activities Prevention Act) should not remain in the statute book in the present form.The former Supreme Court judge was speaking at a webinar by CJAR- "Discussion On DEMOCRACY, DISSENT AND DRACONIAN LAW- Should...

"The time has come that section 124A (of the IPC; on sedition) be held as unconstitutional", said Justice Deepak Gupta on Saturday. He also said that a law like the UAPA (Unlawful Activities Prevention Act) should not remain in the statute book in the present form.

The former Supreme Court judge was speaking at a webinar by CJAR- "Discussion On DEMOCRACY, DISSENT AND DRACONIAN LAW- Should UAPA & Sedition Have A Place In Our Statute Books?" In the light of CJI N. V. Ramana's oral observations asking the Centre if it Is It Still Necessary To Continue Sedition Law, Which Was Used By British To Suppress the Freedom Movement, Justice Gupta expressed the hope that when the matter challenging the constitutionality of the provision is finally heard by the Court, it will be struck down.

As regards the UAPA, while Justice Gupta stated that he is not suggesting that we do not require a law dealing with terrorist activities, he insisted that any such law should be with "well-defined territories" and not a "nebulous, vague definition of terrorism as is done in UAPA".

He spoke of how this law has led to the incarceration of people for years at an end, where everyone, including the police, knows fully well that no case is made out UAPA is invoked as then the courts are reluctant to grant bail or they feel they cannot grant bail.

The judge called "worrying" the rising trend of arrests under the UAPA and long years of incarceration which is followed by an acquittal or even a discharge. He mentioned Muhammad Ilyas and Mohammed Irfan, arrested from Nanded in August 2012 by the Maharashtra ATS, which linked them to a seizure of firearms and said they were part of a Lashkar-e-Toiba conspiracy to kill politicians, police officers and journalists, and who were recently acquitted by the NIA court. He spoke how after over 19 years after they were arrested, the court of the Chief Judicial Magistrate of Surat in March this year acquitted all 127 persons accused of "promoting a banned organisation", the Students Islamic Movement of India (SIMI) in 2001.

"Natasha Narwal (anti-CAA activist) didn't get bail but her father died during this period. Siddique Kappan's (journalist arrested in October 2020 en route to Hathras to cover the alleged gangrape-murder of a Dalit woman) mother died while he was in jail. Father Stan Swamy, 84 years old, suffering from Parkinson's disease (Bhima Koregaon accused who died in custody)! Are we not humans? Have lost all touch of humanity that this man requires bail? No doubt that the Bombay High Court did ensure he got proper treatment in jail but why could you not be free? The considerations of bail are that the accused should not run away from justice, he should not influence witnesses, he should be available for investigation. And the court had adequate power to put such a restriction if bail was granted to Father Stan Swamy", expressed Justice Gupta.

The proviso to Section 43-D (5) of the UAPA states that an accused shall not be released on bail if the court "on a perusal of the case diary or the report made under section 173 of the CrPC is of the opinion that there are reasonable grounds for believing that the accusation against such person is prima facie true".The Supreme Court judgment in NIA v. Zahoor Ahmad Shah Watali (2020) ruled that it is not permissible for courts to even engage in a detailed analysis of prosecution case while considering bail under UAPA and to weigh whether evidence adduced by prosecution is even sufficient or not.

"What comes in the way is 43D and the judgement in the Watali case. Thankfully, in Najeeb's case (2021), the Supreme Court has taken a view that the powers of the superior courts to grant bail cannot be curtailed. In my opinion, a provision that takes away the power of superior courts to grant bail denies the power of judicial review to the accused person and therefore, is unconstitutional. You can lay down conditions for bail, as under the NDPS Act, but here, the condition is that you have to believe everything that has been said in the report under 173 and if you believe what the police has said in the 173 report, then there will be no bail. Every police officer worth his salt will ensure that the 173 report prima facie will make out a case", reflected Justice Gupta.

Noting that the application of the UAPA is associated with antinational activities, the judge expressed that the district courts may be worried about the reactions on social media and public opinion if they grant bail. "It is for the High Courts and the Supreme Court to lead from the front. Because the superior courts have two roles-adjudicatory role and the role of being the protector and defender of human rights of the citizens", he urged.

Justice Gupta spoke of the vagueness of the provisions of sedition and the UAPA and how they are consequently misused- "The Indian Constitution is one of the few constitutions in the world which has an Article like 32 where the right to move the Supreme Court for enforcement of fundamental rights is itself a fundamental right. When you combine these roles together, it will become much easier to come to the resolution that laws which are very vague either should be struck down or the vagueness should be removed by the court by saying if you do these things, only then the law will be valid, otherwise it will not be. The vagueness in the laws, both in sedition and the UAPA, is what helps the prosecuting agency in charging the people"

Although Justice Gupta conceded that we cannot totally shut our eyes to the fact terrorism is a worry today, he insisted that any anti-terror law must be construed very strictly. "When something like the Bombay attack happens, it is worrying for all of us. I would not go to the extent to say no Act is required at all. But the law must be very strictly construed, it must be used only against terrorist activities. It is to be drafted in such a manner and interpreted by the courts in such a manner that there is no scope for misuse", he said.

He expressed the opinion that a law like the UAPA should not remain on the statute book in the form in which it is in right now- "Lal Bahadur Shastri said if I have to deal with problems in Nagaland and Manipur, I don't need an Act like that but I can deal with it by talking face-to-face"

Justice Gupta was of the view that it is now the time for a relook at the proposition of law that the courts have always followed when there is a challenge to the constitutionality of a law- that only because there is scope of misuse, the law cannot be set aside, and as and when, there is misuse, the courts can check it. "I think the time has come to relook this proposition of law, if a law is capable of gross abuse and it is proven to the court that it is being abused day in and day out. Look at the gentleman in Manipur who said cow urine will not cure Covid and he is put behind bars under the NSA (the Supreme Court has on Monday ordered release of Manipur based political activist Erendro Leichombam, who was detained under the stringent National Security Act over a Facebook post that cow dung or cow urine will not cure COVID). Are we living in a police state?", asked the judge.

Justice Gupta opined that the Court has to relook a lot of the earlier judgements and see that where there is a challenge to the law, and if it is capable of gross abuse, then even if the law does not so provide, the court, invoking its inherent powers under Article 142, can lay down guidelines for initiating a case under these laws.

"There has to be payment of compensation in view of wrongful incarceration under the UAPA, like in the case of this gentleman from Manipur. The DM should be fastened with the liability to pay so that the next time his political master asks him to put a man behind bars, he will think before he does so as the compensation would come from his own pocket. The courts must also be stricter with the law enforcement agencies and not with the people who are victims of these laws", expressed Justice Gupta.

The judge expressed regret that some judges still do not realise what terrorism is and what sedition is, and he commended the Delhi High Court judgment granting bail to 3 anti-CAA student activists. "I am so happy that the Delhi High Court did come out with the judgement. It is a very well written judgement. This could be one of the best analysis of the approach to be adopted in connection with the UAPA.

The Delhi High Court judgement is remarkable in that. They have said no case under UAPA is made out. They didn't have to go to 43D because there is no terrorist activity. The court said that the accused were organising some protest, 'chakka-jaam' against the CAA, so where is the question of applying UAPA!", said justice Gupta.