UAPA & Sedition-Sufficient Amount Of Compensation Has To Be Given To All People Who Have Been Wrongly Arrested And Detained: Justice Madan Lokur 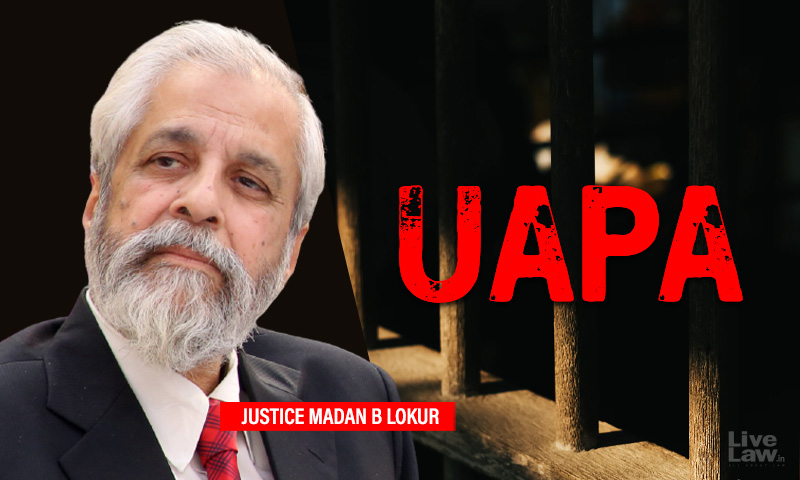 "My view is that the sedition law and the UAPA are not going anywhere, they will remain where they are. And in fact, the NSA is now being added to it to stop people from talking", expressed Justice Madan B. Lokur on Saturday.The former Supreme Court judge was speaking at a webinar by CJAR- "Discussion On DEMOCRACY, DISSENT AND DRACONIAN LAW- Should UAPA & Sedition Have A Place In Our...

"My view is that the sedition law and the UAPA are not going anywhere, they will remain where they are. And in fact, the NSA is now being added to it to stop people from talking", expressed Justice Madan B. Lokur on Saturday.

The former Supreme Court judge was speaking at a webinar by CJAR- "Discussion On DEMOCRACY, DISSENT AND DRACONIAN LAW- Should UAPA & Sedition Have A Place In Our Statute Books?"

Justice Lokur was primarily addressing the issue of the need for a system of compensation and reparation for those who are acquitted after long periods of incarceration under these laws. "I can answer that in one word- the answer is 'yes, it should be there'", he said.

The judge indicated the recent case where the Supreme Court has on Monday ordered release of Manipur based political activist Erendro Leichombam, who was detained under the stringent National Security Act over a Facebook post that cow dung or cow urine will not cure COVID. "You have Manipur. And you have Uttar Pradesh, where the Allahabad high court struck down as many as 90 orders under the NSA", said Justice Lokur.

"It is nice to say that UAPA should go and sedition should go, but I don't think they will go. And now probably, the NSA will also be used. So how will people deal with the situation? The only way is accountability. It has to be in 2 forms- one is financial. Compensation, a sufficient amount, has to be given to all these people who have been wrongly arrested and detained. And once the court starts telling the police and the prosecution that you must pay 5 lakhs or 10 lakhs, they will probably come to their senses. The second aspect that we have not looked into at all is the mental aspect. Because we think 5 lakh rupees is given so everything will be fine. But there is a lot of mental trauma, not only for the person who believes he is innocent and is eventually proved to be innocent, but for his family, friends and relatives. That person undergoes severe mental trauma from being in jail for many, many years for something he has not done, for useless charges like in the Manipur case, for false charges- what about the mental frame of mind of that person? Psychological impact? Emotional impact? His family? His children will go to school and will be told your father is in jail! Why? Because he is a terrorist! Because he is a national security threat! He has committed sedition!", explained the judge.

Justice Lokur canvassed how the concept of reparation and compensation is not something new through 5 judgements given by the Supreme Court- Rudul Shah case of 1983, where one was acquitted and was in jail even after acquittal for 14 years and the Supreme Court gave compensation of Rs.30,000 and the right to file a civil suit for damages; Sebastian Hongray case of 1984, where one was picked by the police and subsequently disappeared. The Supreme Court had asked the police to produce the person, to which the police replied that they had not picked him up. Since the evidence showed he was picked up and because he was not produced, it was assumed he was dead. The court gave his family 1 lakh rupees as compensation; the 1985 Professor Bhim Singh case, where an MLA in Jammu and Kashmir going to attend the Assembly session was picked up and prevented from attending the session.The Supreme Court has given Rs. 50,000 as compensation; In 1989, Saheli, an NGO, filed a case of death in police custody. Rs. 75,000 was awarded by the Supreme Court; The 1983 Nilabati Behera case where the petitioner's son had died in police custody and his body was found near the railway track. The Supreme Court had awarded compensation of Rs.1,50,000.

"The Supreme Court has been giving compensation for death in police custody, disappearances, picking up etc since a long time ago. After Nilabati Behera, perhaps this kind of illegal arrest did not take place, because for some reason, the culture of compensation died down. But now we are faced with it once again. We have Nambi Narayanan, a very eminent scientist, who was detained (in an espionage case) and the Supreme Court gave him 50 lakhs as compensation!", remarked Justice Lokur.

The judge indicated how Assam MLA and peasant leader Akhil Gogoi was arrested and detained under the UAPA for more than one year in connection with anti-CAA arrests and he was discharged (not even acquitted, but discharged as no offence was made out), but no compensation was awarded; how comedian Munawar Farooqi, arrested under the charge of outraging religious beliefs for allegedly making a joke at a comedy show, was released by the Supreme Court because the arresting was against the guidelines in the 2014 Arnesh Kumar case but no compensation was awarded.

"So the Supreme Court may lay down guidelines for the application of the UAPA and sedition law, but if the police says we don't want to follow them, they will not follow", commented Justice Lokur, in context of a suggestion at the webinar that the Supreme Court, under Article 142, may prescribe guidelines, stipulating cases for the invocation of these laws.

The judge continued to mention the case of Mohammad Habib, a man from Tripura was detained in Bangalore and was in jail for four years after the police identified him as a "conspirator of a terrorist attack" by Lashkar-e-Taiba. He was discharged, but compensation was awarded. He spoke how after over 19 years after they were arrested, the court of the Chief Judicial Magistrate of Surat in March this year acquitted all 127 persons accused of "promoting a banned organisation", the Students Islamic Movement of India (SIMI) in 2001, but no compensation was given. Further, Bashir Ahmad Baba, a person from Kashmir who was going from Gujarat to attend an anti-cancer camp, was arrested on the charge of being a terrorist and jailed for 11 years. He was acquitted but no compensation was forthcoming.

"Not just acquittal, but there are several other cases where compensation must be given", continued the judge.

Justice Lokur discussed instances of persons who were directed to be released by courts but continued to be detained and who have not received any compensation- "About 25 years ago, the Delhi High Court directed the Tihar Jail to release one person, but he was kept inside for another 15 days. The Court awarded him compensation of Rs. 1000 per day...Actor Sanjay Dutt was released by the Supreme Court on bail, but he was in jail for two days because the order did not reach...In Delhi, three activists (Natasha Narwal, Devangana Kalita and Iqbal Asif Tanha) were granted bail but were not released forthwith because the police said it wanted to check their Aadhaar cards and address – they are supposed to be in jail, did they not check the Aadhaar card and address when they were arrested? What is all this going on? Orders are passed by the court, but they say if we want to follow, we will follow, otherwise not?... Agra jail – persons proclaimed to be juvenile had been in jail for 14 to 22 years! The Supreme Court said 'release them', Agra jail said 'no'! They remained in jail till the Supreme Court said we are going to take action! What is the consequence of this? In the Manipur case, the Supreme Court said you better release him by 5 o'clock! This is the state that we have come to? That Courts have to order release by 5 PM, 6 PM? This is the duty of the authority of the police to release the person! And there was no compensation in any of these cases!"

"It is not just a question of acquittal. There could be an acquittal for a variety of reasons. But the whole process starting from arrest, as in the case of Munawar Farooqi, until the framing of charges, until the trial, until the acquittal has to be looked into! It is very, very important", emphasised the judge.

Justice Lokur spoke of the development of "soft torture" by way of overcrowding, lack of hygiene and medical facilities, nutrition- "We know about 2nd degree and 3rd degree but now there is soft torture. Overcrowding in jails, where in a cell for one person, there are four persons. So who has to sleep on the platform? Inconvenience at the time of sleeping! Hygiene not provided! I have been to some observation homes for children where in a dormitory of 50 children, there was just one toilet! Isn't that torture of some kind? And Nutrition?There are children in detention under Public Safety Act in Jammu and Kashmir? What about their nutrition? Medical facilities? A Person is entitled even if he is a prisoner! You have somebody like Hany Babu (Bhima Koregaon accused) whose eye was in a very bad shape, but only when it appears that he might lose his eyes was he sent to hospital. Father Stan Swamy (84 year old Bhima Koregaon accused suffering from Parkinson's disease who died in custody)...This is a kind of torture, not a physical kind of torture when you beat up a person, but it is a form of torture. There was a report recently of a person who is allowed to go out from the cell for two hours in a day and for 22 hours he is locked up. That is almost solitary confinement!"

"Let us look at the whole thing and not just compensation after long periods of incarceration and acquittal!", he urged, signing off.