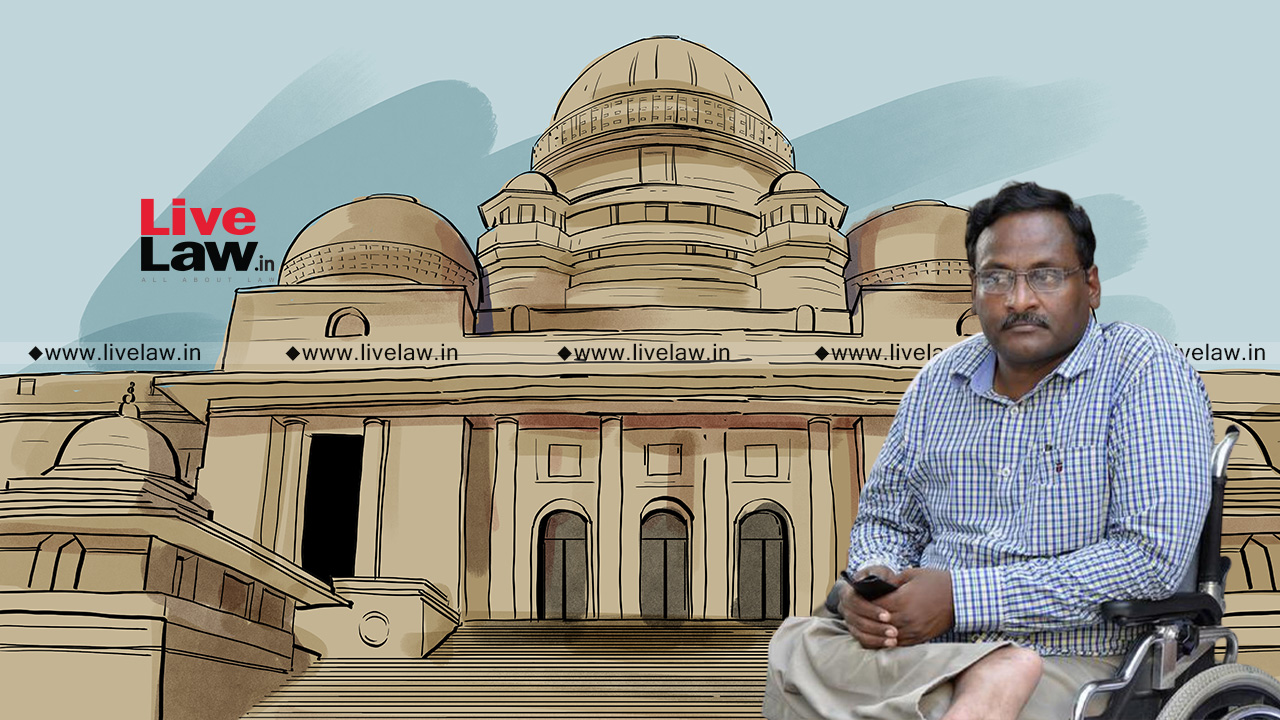 Acquitting former DU Professor GN Saibaba and five others in a maoist- links case under the stringent UAPA, the Bombay High Court has held the entire trial against them to be null and void in the absence of a valid sanction under section 45(1) of the Unlawful Activities Prevention Act.

The bench of Justices Rohit Deo and Anil Pansare noted that the sanction to prosecute GN Saibaba under UAPA was accorded by the Maharashtra government after the trial began against him instead of being submitted before, rendering the entire proceeding invalid.

As for the remaining accused, the Directorate of Prosecution's (reviewing authority's) report to the State home department seeking grant of sanction was sans reasons, a breach of the mandatory provisions of sub-section (2) of Section 45 of the UAPA, the bench held. It rejected the prosecutions argument of egregious defect in or absence of sanction is a curable defect.

"We are inclined to hold, that every safeguard, however minuscule, legislatively provided to the accused, must be zealously protected."

"Sessions Trials 30/2014 and 130/2015 are null and void in the absence of valid sanction under Section 45(1) of the UAPA, and the common judgment impugned is liable to be set aside, which we do order," the bench held heavily relying on the Supreme Court Judgement in Baij Nath Prasad Tripathi.

Emphasising the importance of procedural compliances in cases of terrorism the bench observed that "departure from the due process of law fosters an ecosystem in which terrorism burgeons and provides fodder to vested interests whose singular agenda is to propagate false narratives."

"Verily, terrorism poses an ominous threat to national security. Vile and abhorrent acts of terror do evoke collective societal anger and anguish. While the war against terror must be waged by the State with unwavering resolve, and every legitimate weapon in the armoury must be deployed in the fight against terror, a civil democratic society can ill afford sacrificing the procedural safeguards legislatively provided, and which is an integral facet of the due process of law, at the altar of perceived peril to national security."

"The Siren Song that the end justifies the means, and that the procedural safeguards are subservient to the overwhelming need to ensure that the accused is prosecuted and punished, must be muzzled by the voice of Rule of Law."

In its 101-page judgement the bench restricted its observations to validity of sanction to prosecute the accused under the Unlawful Activities (Prevention) Act.

The bench relied heavily on the constitution bench judgement of the Supreme Court under the Prevention of Corruption Act in Baij Nath Prasad Tripathi that if cognizance is taken without complying with the requirement of valid sanction, entire trial shall stand vitiated, and the conviction or acquittal recorded would not be by Court of competent jurisdiction.

"In interpreting the provisions of Section 45 of the UAPA, we deem it safer to be guided by the authoritative enunciation of the Hon'ble Supreme Court while considering para materia provisions of the TADA," the bench held.

The accused's trials were later joint as GN Saibaba was arrested later. The prosecution alleged that they were working for the banned CPI(Moist) from frontal organisations like RDF and relied on seizure of pamphlets, and alleged anti national material in electronic form, mainly seized at Saibaba's behest in Gadchiroli.

The prosecution alleged that Saibaba introduced them to underground members of CPI (Maoist) and its frontal organisation RDF. Also that he handed over a 16GB memory card to be given to Naxalites hiding in the Abuzmad forest area.

However, it may be noted that on the prosecution's argument seeking liberty to retry the accused with proper sanction, the bench indicated that there was no bar in doing so. It held that the rule of double jeopardy wouldn't apply if a trial is vitiated owing to improper sanction.

The Director of Prosecution recommended sanction to prosecute all under UAPA, however permission was granted by Additional Chief Secretary Amitabh Ranjan on February 15, 2014 only to prosecute first five, not GN Saibaba.

Advocates Pradeep Mandhyan, Barunkumar and H.P. Lingayat represented the first five accused. Mandhyan argued that CDR was received by the investigating agency, and that too not in entirety, on the day the sanction was accorded. Moreover, forensic evidence was not there before the sanctioning authority to consider.

Senior Counsel Mr. SP Dharmadhikari assisted by Advocate Nihal Singh Rathod for GN Saibaba submitted, that in the absence of sanction, the learned Sessions Judge was precluded from taking cognizance of the offence and the proceedings are null and void. He submitted that provisions of Section 45(1) of the UAPA shall would override the provisions of Section 190 and Sections 460 to 465 of the Code of 1973.

Special Public Prosecutor Siddharth Dave submitted that the first witness was recalled after sanction was accorded and a late sanction was a curable defect.

The Court held that the sanction order dated 15.02.2014 regarding the first 5 accused was issued without proper application of mind and was hence invalid.

"The sanctioning authority asserts that the sanction was given after considering the report of the authority appointed. The term "consider" postulates application of mind to all the relevant aspects of the matter and connotes that the thought process must be discernible. In the absence of any summary of the review or other material in the report as may disclose the rationale underlying the recommendation, we unhesitatingly hold that the sanctioning authority paid lip service to the legislative mandate and the report of the appointed authority was sought, and unfortunately given as a ritualistic formality. The transgression of the legislative imperative renders the sanction order dated 15-2-2014 bad in law".

"Having so observed, and as recorded supra, the sanction given is none-the-less invalid in view of the infraction of the legislative safeguard of the requirement to consider the report of the appointed authority. The purported report contains the conclusion sans reasoning," the court held about the sanction to the five accused.

"In our view, a laconic communication conveying only the recommendation sans summary of analysis of the review of the evidentiary material is not a report which the legislature intended the appointed authority shall submit to the sanctioning authority, and stands on the same footing as absence of report," the bench held.