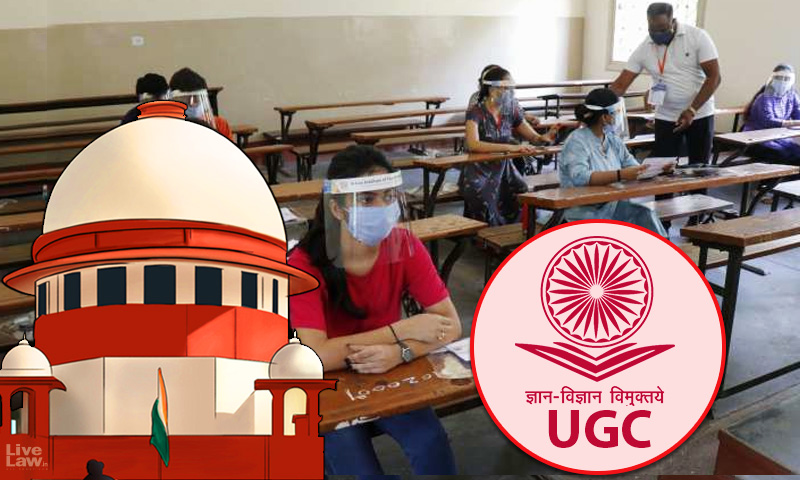 The Supreme Court on Friday approved the guidelines issued by the Universities Grants Commission (UGC) on July 6 for holding final semester exams by September 30."The Guidelines were issued with the object that a uniform academic calendar be followed by all the Universities and final /terminal examinations be held", observed a bench comprising Justices Ashok Bhushan, R Subhash...

The Supreme Court on Friday approved the guidelines issued by the Universities Grants Commission (UGC) on July 6 for holding final semester exams by September 30.

"The Guidelines were issued with the object that a uniform academic calendar be followed by all the Universities and final /terminal examinations be held", observed a bench comprising Justices Ashok Bhushan, R Subhash Reddy and MR Shah.

The Court stressed that the uniform deadline of September 30 across the country was set for the welfare of the students, by saying :

"The students who look forward for admission in higher classes or take employment require final degree for their career prospect and to maintain uniformity in dates by which final examinations are over is with the object of students welfare and for their career and it cannot be said that since uniform date has been fixed by which Terminal semester/ Final year examination are to be completed, Article 14 has been violated".

The top court also held that the guidelines have statutory force, having been issued invoking the powers under Section 12 of the UGC Act. Therefore, they are binding on the Universities.

"As per the Statutory Regulations, 2003, it is the statutory duty of the Universities to adopt the Guidelines issued by the UGC. The Guidelines dated 06.07.2020 cannot be ignored by terming it as nonstatutory or advisory", the bench said.

Exemption given to intermediate semesters from exams not arbitrary.

The SC repelled the argument that the guidelines were arbitrary and discriminatory for insisting that only final semester students should appear for exams while exempting intermediate semester students.

"The differentiation made in the Revised Guidelines to hold final or terminal semester examination and to give option for earlier years/intermediate semester for not holding the examination has a rational basis. The differentiation has nexus with the object to be achieved. We, thus, reject the challenge to the revised Guidelines on the ground that there is any discrimination between the students of final year/terminal semester and those of intermediate and first year", the bench observed.

Guidelines and SOP show deep concern for the health of students

The Court added that the UGC guidelines and the Standard Operating Procedure formulated by the Ministry of Health showed a "deep concern" for the health of all stakeholders, including students, and rejected the contention that they violated the fundamental right to life and health under Article 21 of the Constitution.

The Revised Guidelines dated 06.07.2020 as well as Standard Operating Procedures for conduct of examinations circulated vide letter dated 08.07.2020 of UGC as well as O.M. dated 06.07.2020 issued by MHRD clearly shows deep concern with the health of all stakeholders, i.e., students as well as the exam functionaries. Challenge to the Guidelines on the ground of it being violative of Article 21 is repelled.

"...the earlier guidelines as well as revised guidelines have taken due notice of the prevailing situation of Covid­19 and it cannot be said that the expert body is unaware of Pandemic spread throughout the Country. The criticism of guidelines that they are unreasonable does not inspire any confidence", the bench observed in this regard.

The bench also held that State/University cannot promote the students in final year/final semester without exams. However, the Court held that the State Disaster Management Authority can take a decision to postpone exams overriding the UGC directions.

Further, the Court granted liberty to States/UTs to appraoch the UGC to seek extension of the September 30 deadline in the light of the pandemic situation.