Understating The Special Status Of Jammu And Kashmir Under Article 35A 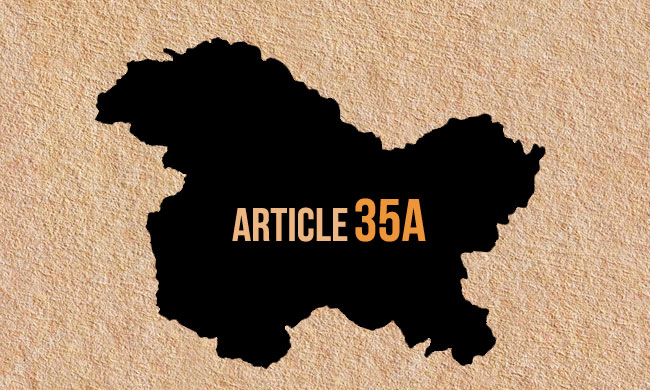 Article 35A was a result of an understanding between the then Prime Minister Jawaharlal Nehru, and the erstwhile leader of the State Sheikh Abdullah. The said provision was added to the Constitution through a Presidential Order passed under Article 370(1)(d) which empowers the President to make constitutional provisions applicable to the State with such modifications and exceptions as he...

Article 35A was a result of an understanding between the then Prime Minister Jawaharlal Nehru, and the erstwhile leader of the State Sheikh Abdullah. The said provision was added to the Constitution through a Presidential Order passed under Article 370(1)(d) which empowers the President to make constitutional provisions applicable to the State with such modifications and exceptions as he may by order specify.

The literal wording of the Article reads as:

Saving of laws with respect to permanent residents and their rights.- Notwithstanding anything contained in this Constitution, no existing law in force in the State of Jammu and Kashmir, and no law hereafter enacted by the Legislature of the State,-

(a) defining the classes of persons who are, or shall be permanent

residents of the State of Jammu and Kashmir; or

(b) conferring on such permanent residents any special rights and

privileges or imposing upon other persons any restrictions as

(i) employment under the State Government;

(ii) acquisition of immovable property in the State;

(iii) settlement in the State; or

(iv) right to scholarships and such other forms of aid as the State Government may provide,

shall be void on the ground that it is inconsistent with or takes away or abridges any rights conferred on the other citizens of India by any provision of this Part.".

In his speech given on the aforesaid Order in Lok Sabha, Nehru had quoted the following:

'The question of citizenship arose obviously. Full citizenship applies there. But our friends from Kashmir were very apprehensive about one or two matters. For a long time past, in the Maharaja's time, there had been laws there preventing any outsider, that is, any person from outside Kashmir, from acquiring or holding land in Kashmir... So the present Government of Kashmir is very anxious to preserve that right because they are afraid, and I think rightly afraid, that Kashmir would be overrun by people whose sole qualification might be the possession of too much money and nothing else, who might buy up, and get the delectable places. Now they want to vary the old Maharaja's laws to liberalise it, but nevertheless to have checks on the acquisition of lands by persons from outside. However, we agree that this should be cleared up. The old state's subjects definition gave certain privileges regarding this acquisition of land, the services, and other minor things, I think, State scholarships and the rest.'

Therefore, Article 35A not only confers powers upon the State Government to give special benefits to the permanent residents of the State, it also proscribes non-permanent residents from permanently settling in the state, buying immovable property, acquiring land, applying for government jobs, any kind of scholarships and aids and other public welfare projects.

Popularly known as the Permanent Residents Law, it prohibits a woman hailing from the State to stake claims to any property rights if she marries a person from outside the state. The same also extends to the children of such women as cease to enjoy any succession rights over the property.

Currently there's a petition pending before the Supreme Court that challenges the constitutional validity of Article 35A on the following grounds:

Many conditional experts have raised doubts over abrogation of the said provision. A judgment passed by the High Court of J&K in The High Court Of Jammu And Kashmir vs S. Mubarik Shah Naqishbandi had held in 2015 that:

It is also claimed that since Article 35A stems from powers conferred on President under Article 370, the same cannot be abrogated without hurting Article 370 itself. Since, abrogation of Article 370 requires the assent of the J&K Constituent Assembly, the provision has now become permanent as the said Constituent Assembly ceased to exist post 1957 and no decision was taken on the same during the time of its functioning.